CHICAGO — ESPN’s Adam Rittenberg knows a thing or two about the B1G. The college football writer used to cover all things B1G for ESPN.

Even though he’s still based in Chicago, Rittenberg’s role at ESPN expanded into the national college football scene a few years ago. Still, he’s as connected as any college football writer in the country, and he knows the B1G inside and out.

We caught up with Rittenberg at B1G Media Days to talk about a variety of B1G topics.

Saturday Tradition: You’ve seen what the B1G East has become with the power programs at the top. How does it compare to the SEC West with an Alabama and an LSU?

Now the depth of the overall conference is not where the SEC is. It’s still a division where you have an Indiana, a Rutgers and a Maryland — we’ll see where they go with their programs with new coaches — and compare it to the SEC West and everyone in the division has done something of note recently. I’d still give them the edge as far as depth, but that the top, it’s hard to argue with what the B1G East has. 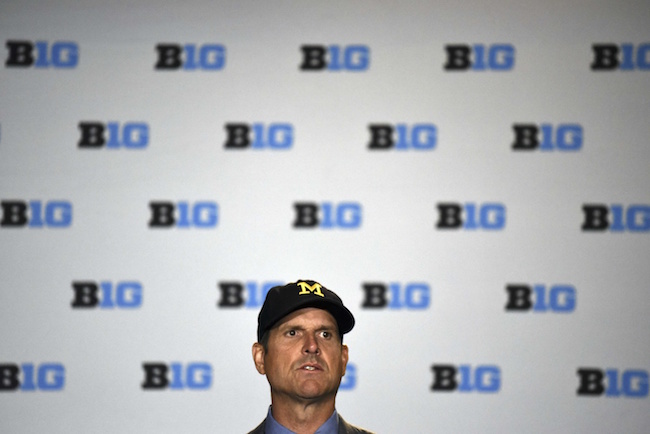 AR: Well there’s a lot of talk about Jim Harbaugh off the field. A lot of people are interested to see how it evolves on the field. This is such an important season because (Michigan) returns a roster that should compete for a B1G Championship, especially with Ohio State and Michigan State losing what they lost and with Penn State just getting back to full scholarships.

Now the focus shifts from all of this stuff off the field with Jim Harbaugh to what they do in between the lines. Last year, they won but this is still a conference where you only have one program that’s competed for national championships since the BCS era started and that’s Ohio State. Who else is going to do that?

Michigan State has raised their profile nationally and they have a lot of respect from coaches around the country. Part of that is because (Mark) Dantonio worked for Nick Saban, and he’s very, very close to Bob Stoops. Bob has tremendous respect for Mark. But is Michigan State going to get back to the playoff the next five years and compete for a national championship?

Those things are critical. That’s what separates the B1G in my mind still. Until multiple B1G teams win a national title — whether it’s Michigan, Michigan State, Penn State or Nebraska — it’s hard to say that the B1G is where the SEC has been.

ST: Jim Delany just talked about the fact that there are no plans to shift the divisions to make them more balanced anytime soon. Do you see that as something that could happen down the road and could be a benefit to the conference?

I understand Jim Delany’s frustration with that. He got so much flack for Legends and Leaders but the actual principles behind those divisions I think were correct. Based on balance and based on long-term data — yeah, there were some rivalry issues and people were upset about — but that’s the way you’re supposed to do it.

Now if it does continue another 10 years and the West Division champ never wins the conference, doesn’t compete for a national championship and they’re not really holding up their weight, than maybe you try to shift things around. The one thing for fans to know is that with a nine-game conference schedule, they’ll see other teams in the league a lot more instead of going for or five years without seeing a team.

ST: You know Northwestern well as someone who lives in Chicago. Was the 10-win season a flash-in-the-pan year or something Pat Fitzgerald can sustain?

AR: It’s been interesting. They had two 10-win seasons in their history until 2012 when they won 10 games. Then they won five games two years in a row and then 10 again so they’ve had two 10-win seasons in the last four years. It’s going be hard for any program to sustain that, much less a program like Northwestern, which still has very strong academic standards and doesn’t have the greatest facilities in the world.

With this year’s schedule, it’ll be tough to match that. You can really only look at Northwestern from 1995 on. You have to. What happened before then is irrelevant. It’s irrelevant to any player. They weren’t born yet. What they’ve been doing since 1995 has been pretty consistent. They won a couple B1G Championships, they’ve made bowl games and have had seven wins, eight wins, six wins, now 10 wins twice.

They’re a team that you can expect to go to bowl games most seasons and I think this is a team — based on their defense — that should go to a bowl game again. But winning 10 games with this schedule is going to be tough.

ST: Is there any B1G team that you think things are setting up well for them to make a surprise run?

AR: So much of it is based on scheduling. I think Minnesota has an opportunity this year if they start off strong to be a little bit of a surprise team, especially with the West being so wide-open. They’ve shown they can beat Nebraska, they’ve shown they can compete with teams on that side, except Wisconsin. Wisconsin has had their number now for a dozen years and I know from talking to Gopher players, that’s the streak they want to end. It’s going to be a really important marker for them to grow as a program. Maybe it’s this year with Wisconsin going through that meat grinder of a schedule.

They’re an interesting team, and I think Nebraska is a fascinating team in Year 2. You study a lot of the metrics and the number of whacky things that happen in a game and all the close losses would suggest that they could take a step forward if they’re just a little cleaner in their play.

Those are two teams in the West that could definitely surprise some people.