Good morning and happy Monday! And indeed, it is a happy Monday for many college football fans across the country. Whether your team won or lost, there were some incredible games and dynamic offensive performances.

There’s plenty for us to discuss today. From a controversial ending in Auburn to a rough weekend for SEC defensive coordinators to some great uniforms, we’ll dive into a number of topics to get your week started. Without further ado, let’s get started with today’s newsletter!

A controversial play cost Arkansas a victory at Auburn. How upset should the Razorbacks be? 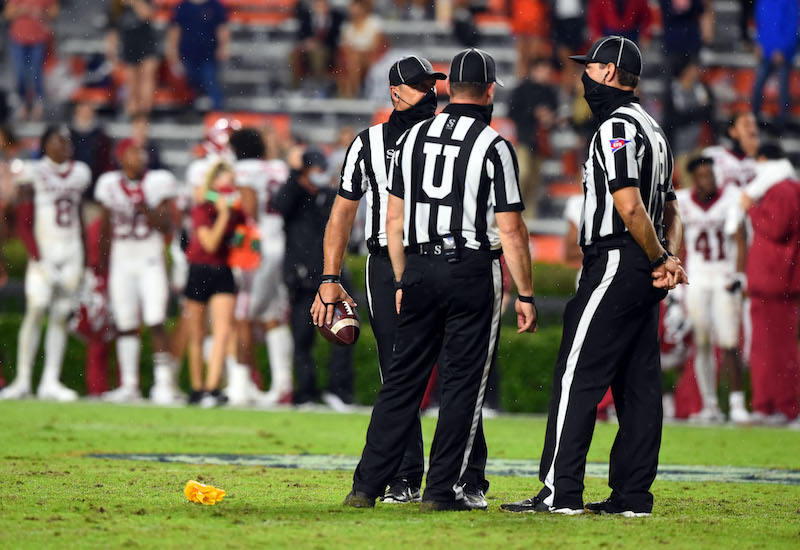 The Arkansas Razorbacks are a revitalized program. After going 0-8 in SEC play each of the past two seasons under Chad Morris, new coach Sam Pittman, OC Kendal Briles and DC Barry Odom have the Hogs back on the right track. Last week, Arkansas even went into Starkville and took down Mississippi State.

Now, though, they’ll have to show their resilience. On Saturday in Auburn, the Razorbacks appeared to be the victims of a major officiating mistake late in the fourth quarter. So, how mad should Arkansas fans be about what happened on Saturday night? Let’s dive into the controversy:

There are no moral victories in college football, but this loss has to be seen as a positive sign for the Hogs, who have been so uncompetitive in recent years. Saturday Down South’s Chandler Vessels wrote that the Hogs’ heartbreak over this loss shows how much they’ve grown as a team. Ole Miss will have to be careful this weekend, because they’re getting a team that is very angry.

Offense is the name of the game these days in college football. On Saturday, we saw some truly explosive performances from a number of teams. That, obviously, leads to some huge stat lines for top players. And, indeed, the FBS leaderboards feature some breathtaking numbers.

So, as we wrap up another weekend of exciting college football action, let’s take a look at the dynamic players who lead the FBS level in these nine important categories (via CFBStats.com):

Who will have the breakout performances this coming weekend? Based on what we’ve seen so far, expect the offensive numbers to continue to impress! Will the defenders be able to slow things down a bit?

Defense no longer appears to be a strength in the SEC after a high-scoring Week 3. What’s going on? 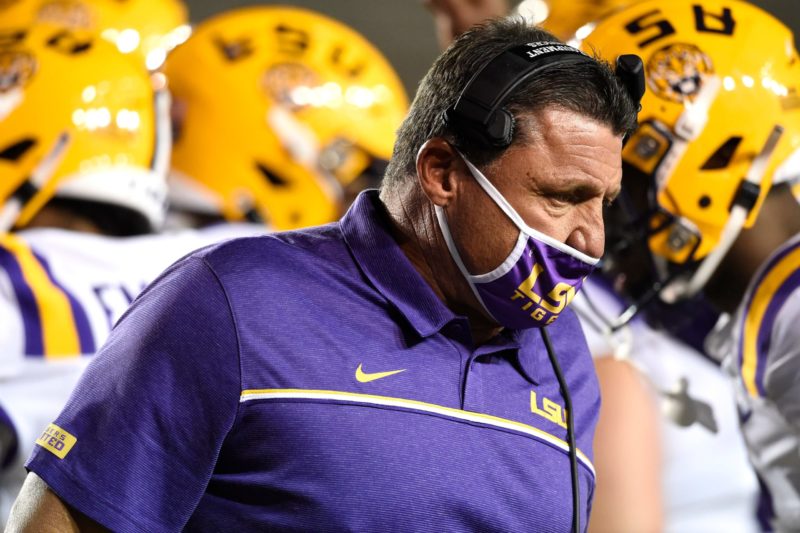 Believe it or not, there was actually a time when Florida, LSU and Alabama used to field intimidating defenses. For a long time, in fact, defense used to be what set the SEC apart from other leagues at the Power 5 level. In Week 3 for the league, though, you might’ve actually believed SEC games were being simulated on an Xbox or PlayStation.

A league that once took pride in its defensive supremacy has officially caved to the video game style of play. Seven teams allowed 40 points or more over the weekend. All but two squads — Vanderbilt and Mississippi State — totaled at least 21 points. As bad as things were defensively for the entire league, things were particularly bad for Florida, LSU and Alabama on Saturday:

Right now, defense does not “just mean more” in the SEC. Instead, the product resembles the Big 12 more than most in the conference would like to admit. Will defenses catch up over the next few weeks? Or, will offense continue to rule the league? We’ll find out starting this weekend!

Alabama RB Najee Harris had an outstanding performance against Ole Miss on Saturday night, running for 206 yards and 5 touchdowns. He’s the first player with a 200-yard, 5-touchdown performance as a rusher this season, and only the third player to run for 5 touchdowns in a single game in Alabama history. For today’s quiz, can you name the other two Alabama running backs to accomplish that impressive feat?

Saturday was full of more great uniform combinations. Who wore it best (and worst) this weekend? 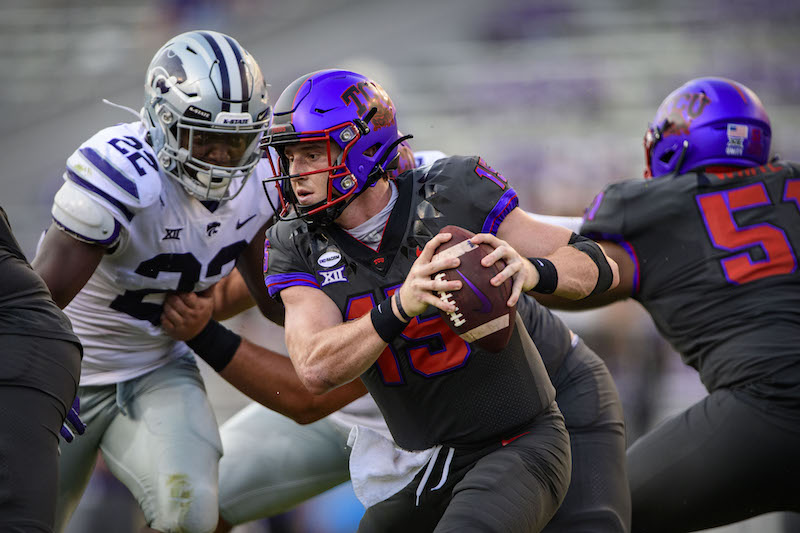 We are truly living through a golden age of college football uniforms. The teams that have historically iconic combinations don’t mess around with their looks too much. But, schools with less-recognizable brands aren’t hesitating to break out new and unique combinations.

Saturday provided some more good looks and other not-so-great combinations. So, who stood out in this week’s action? Let’s highlight a few schools:

Which schools will break out some great combinations next weekend? It’ll definitely be tough to top that TCU release video in terms of bizarreness, but with Halloween approaching, we’ll see if there are any spooky looks coming over the course of the next few weeks. Check back here next Monday for more uniform talk!

The two Alabama running backs to rush for 5 touchdowns in a single game were Shaun Alexander in 1998 and Santonio Beard in 2002, according to ESPN Stats & Info. Considering Heisman Trophy-winning Alabama RBs Mark Ingram and Derrick Henry didn’t accomplish the feat, it’s all the more impressive for Najee Harris. Is a Heisman Trophy in his future?

“Fans were (giving) a standing ovation while we were walking off, and I was very confused with that. You know, we lost. Not that I don’t appreciate the fans doing that, but make sure the players understand we came here to win. We didn’t come here to play close and cover spreads or any of that crap. I told them they have tomorrow off and they’ve got to come back to work. We’ve got to get better. You just don’t get chances like this, and I think kids don’t understand that. You don’t get many chances to beat the No. 1 team in the country … the best program in the entire country, and it’s right there to take.”

– Ole Miss coach Lane Kiffin wasn’t settling for any moral victories after keeping things close in a 63-48 loss to Alabama on Saturday night. This quote should have Rebel fans excited for the future under Kiffin. 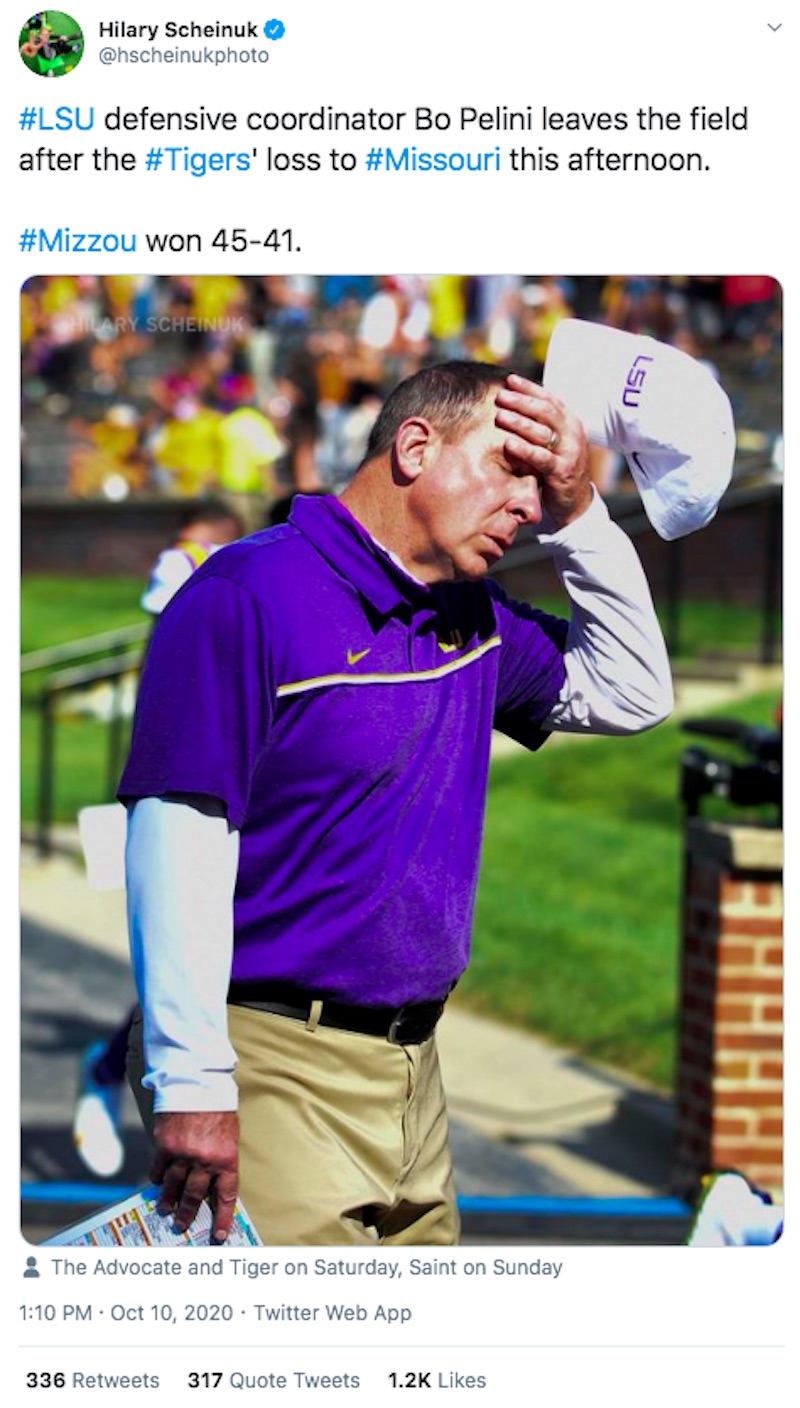 Pictures are worth a thousand words, and this great photo from photographer Hilary Scheinuk says it all when it comes to LSU DC Bo Pelini. What a rough day he had in the 45-41 loss at Mizzou.