Good morning and happy Thursday! Whew, what a week we’ve had in the college football world. From news pouring out of the NFL Combine to a high-profile loss to the Alabama coaching staff, it has been a busy few days of action.

The NFL Combine continues from Indianapolis through the weekend, with on-field drills beginning today. So, with so many important stories to get to, let’s dive right in, shall we?

Alabama’s strength coach is leaving for an on-field job at Georgia. Why is that such a big deal? 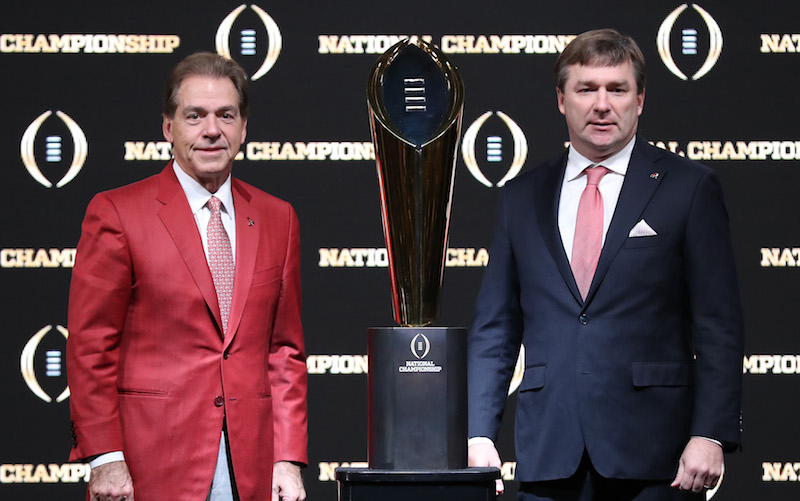 Easily the most divisive, intense story of the week took place in Tuscaloosa, where longtime Alabama strength coach Scott Cochran left to take an on-field job with Georgia. That sparked way more outrage and hot takes than any other strength coach changing jobs ever has.

So, why was this such a big deal? Let’s dive into this mess that really accentuates the tension between the Alabama and Georgia programs and head coaches Nick Saban and Kirby Smart:

As of Wednesday night, Alabama had yet to hire a new strength coach. Brad Crawford of 247Sports put together a list of some potential candidates, so keep an eye on these guys. For now, though, there’s a big hole in the Alabama staff and Georgia is taking a gamble in moving Cochran to special teams coordinator.

The 2020 NFL Draft is still a couple of months away, as it will be held at the end of April in Las Vegas. However, the NFL Combine is taking place in Indianapolis this week, and the on-field workouts from the top players in the country start today.

Players will be divided up by position groups and will work out over the course of the next four days. Here’s a look at the schedule in case you want to see some of your favorite former college stars in action (via NFL.com):

Draft stocks will rise and fall over the weekend at the NFL Combine. Who will be the guys who open eyes and take massive jumps up teams’ draft boards? We’ll find out soon!

Joe Burrow’s hands are kind of small. How big of a deal is that for his NFL Draft stock? 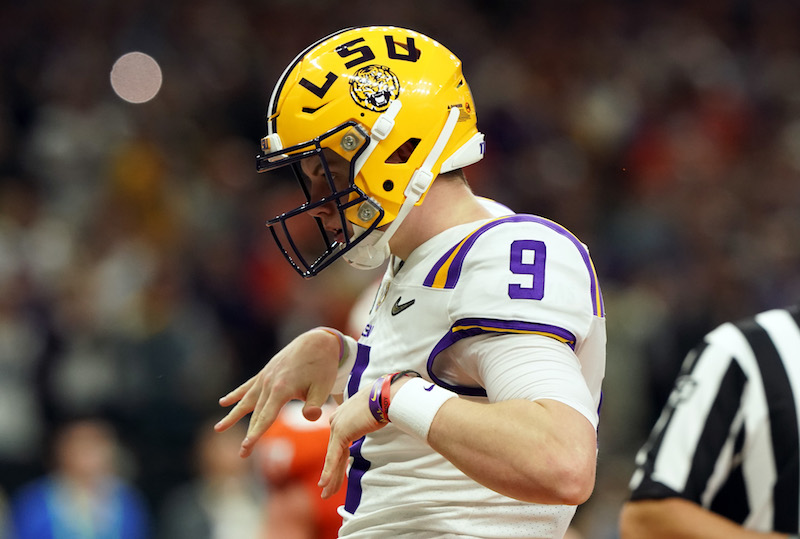 It’s NFL Combine season, and that means we have to pretend to care about things such as hand size and Wonderlic scores for the next couple of months leading up to the 2020 NFL Draft. We’ve already had our first drama out of Indianapolis, as potential No. 1 overall pick Joe Burrow’s hands measured in at only 9 inches.

That has sparked some debate and some interesting responses, so let’s take a look at the reaction to Burrow’s hand measurements over the past couple of days:

Much will be made about Burrow’s hand size and his other performances at the NFL Combine in the buildup to the draft, but it remains to be seen whether it affects his draft stock or not. The Cincinnati Bengals hold the No. 1 pick, so we’ll see what they decide to do.

There’s a new bowl game coming this year. How many bowls can college football support? 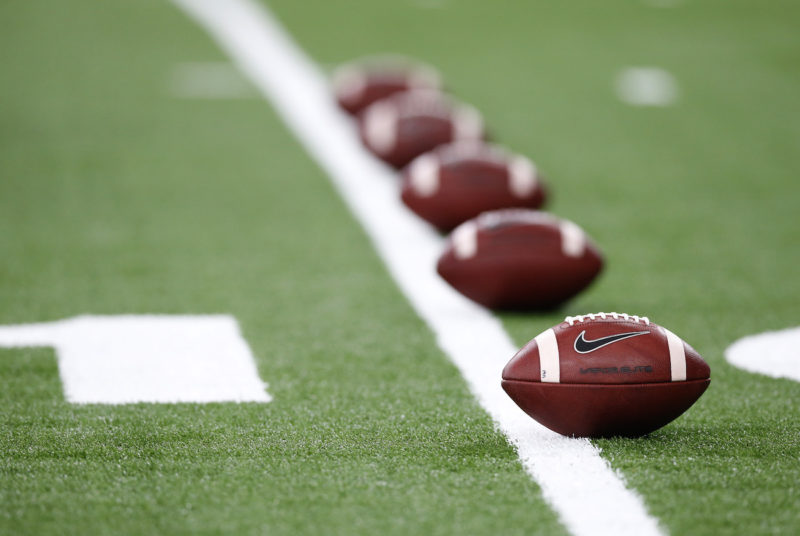 The Los Angeles area is already home to perhaps the most iconic bowl game we have in college football, as Pasadena is the host of the annual Rose Bowl game. That game dates back to 1902 and is lovingly referred to as the “Granddaddy of Them All.”

Apparently, though, there needs to be another bowl game in Los Angeles, as the LA Bowl was announced on Wednesday. Let’s take a look at this new bowl game:

Yes, this is yet another bowl game to pay attention to, but watching football games played in Los Angeles is always a beautiful sight to see on TV. The Rose Bowl consistently provides some amazing footage of sunsets, so we’ll see if the new SoFi Stadium can match it in beauty. Having the top team from the Mountain West won’t hurt the bowl’s watchability, either.

Last week, we gave you five schools and asked you to name the head football coaches for each of those schools. Today, we’ll give you the names of five coaches. You tell us which FBS program they lead. Ready? Here we go:

There are several key defenders still in the transfer portal. Where will they end up going? 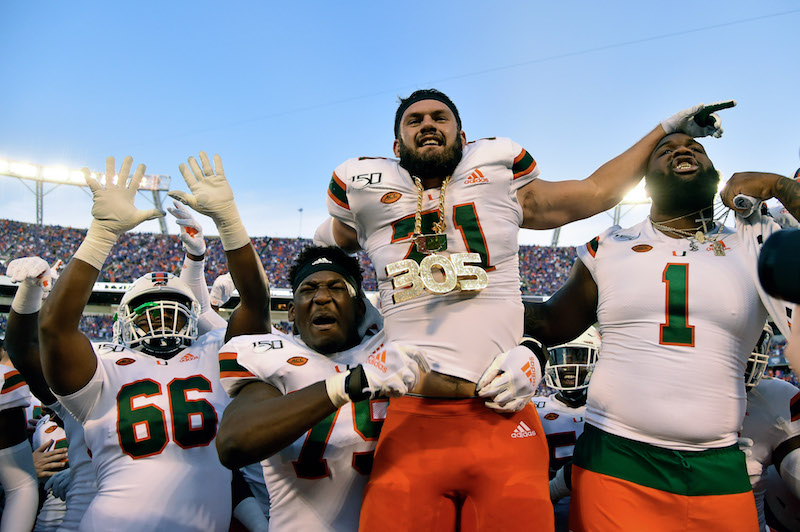 If your favorite team is weak at a certain position or lacks depth, there are still plenty of options out there. The NCAA transfer portal is still full of players who are exploring moving on to new schools ahead of the 2020 season.

These guys will explore all their options. If they do decide to move on, they could have a big impact on how the 2020 season plays out. Keep an eye on some upcoming player movement.

Here are the schools currently coached by the five guys listed above:

We’ll see how long these guys remain in their current jobs before they are either let go or move on to another job in the college or pro ranks.

“Well, I don’t like (Tua’s comments) because I don’t think that a young phenom, with all the potential in the world – once he gets healthy, needs to contaminate himself to such a flagrant degree before he even does anything. You know, listen, being a Cowboy, it’s going to give you the sizzle, it’s going to give you the back pages. But I think they’ve proven, your Thanksgivings are not going to be very beneficial. Christmas time is not going to be a festive time for you. To be a member of the Dallas Cowboys is to virtually ensure that your holiday seasons are not going to be jolly.”

– ESPN’s Stephen A. Smith made a bizarre argument for why Tua Tagovailoa wouldn’t like being a Dallas Cowboy. Seriously, click that link, because the quote above is only the tip of the iceberg on Smith’s argument. 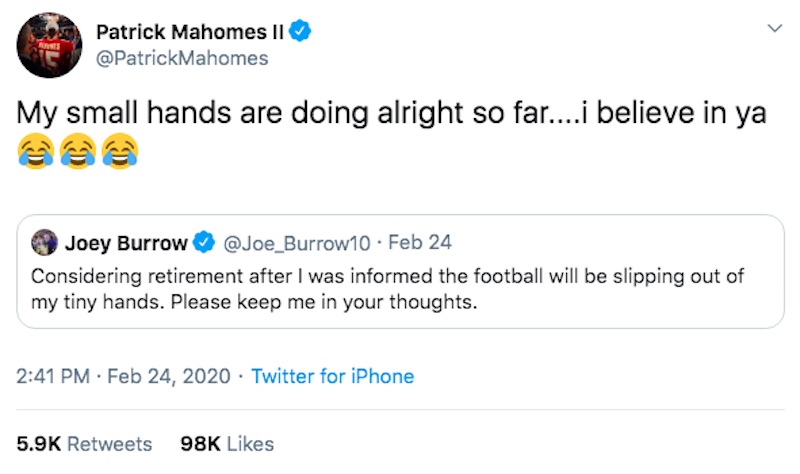 Joe Burrow’s hands, as mentioned above, measured in at only 9 inches at the NFL Combine. Super Bowl champion Patrick Mahomes’ hands were only 9 1/4 inches. Mahomes has confidence Burrow can overcome his small hands, too.