Good morning and happy Friday! This weekend’s slate of games has taken a beating as COVID-related cancellations have popped up in the Big 12 and the SEC. Still, there are some big matchups on the schedule that should be interesting to watch.

In today’s newsletter, we’ll discuss how Nick Saban’s absence will impact Alabama against Georgia. We’ll also put a few teams on upset alert and take a look at whether or not anyone can challenge Clemson in the ACC. Let’s get started!

Nick Saban tested positive for COVID-19 ahead of a game vs. Georgia. How will it affect Alabama? 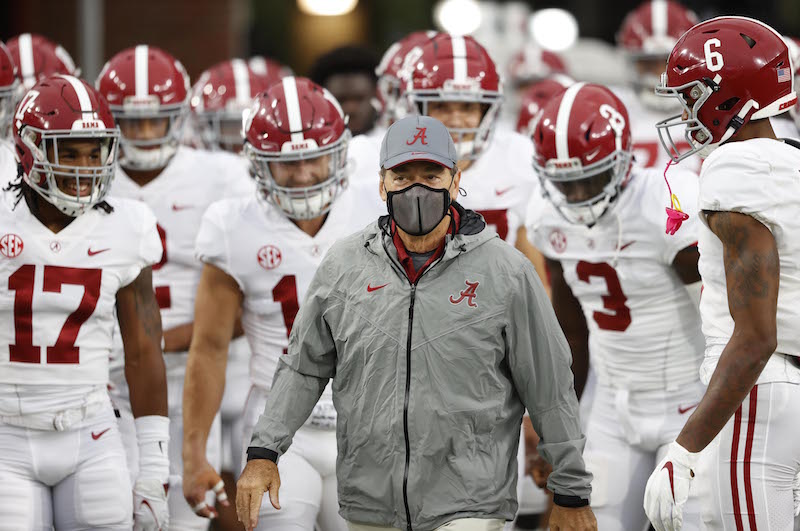 So, it appears Saban won’t be on the sidelines when No. 2 Alabama hosts No. 3 Georgia on Saturday night. How will that impact the game? Many have weighed in on it this week:

Fortunately, it seems that Saban is asymptomatic at this point. The latest update from his doctor was a good one. Hopefully, he’s able to return to the sidelines and to practices safely soon. But, on Saturday, it’s going to be very strange to not have him on the sidelines against his former assistant Kirby Smart and the Georgia Bulldogs.

There have already been four FBS games postponed for this weekend (Mizzou-Vanderbilt, LSU-Florida, Cincinnati-Tulsa and Baylor-Oklahoma State). However, there are still some intriguing matchups on the schedule for Saturday.

So, which teams are favored to win in some of the more important games on the schedule? Let’s take a look at some of the favorites as things stand on Thursday evening:

Will we see some more carnage in the rankings? There have been plenty of upsets already this season, so we’ll see which squads can avoid losing as big favorites this weekend.

The ACC surprisingly has 3 teams ranked in the Top 5. But can anyone really dethrone No. 1 Clemson?

The ACC has been the victim of finger-pointing and name-calling from other conferences around college football over the last few seasons. The league’s lack of depth behind Clemson has been criticized beyond exhaustion. The jokes about the Tigers’ softer-than-toilet-paper schedule have been repeated more frequently than a broken record.

But the unique circumstances of the 2020 season have provided the ACC with an opportunity to prove there’s more to the conference than Clemson. Notre Dame is ranked as the No. 4 team in the country after a 3-0 start, sitting in the conference on a one-year lease. North Carolina has risen quickly to the No. 5 spot, also beginning the year with three straight wins. Yes, that’s right, the ACC has three teams ranked in the top five spots of the Associated Press Poll. Do either the Fighting Irish or the Tar Heels actually pose a threat to top-ranked Clemson, though?

It’s difficult to tell if Notre Dame and North Carolina are serious contenders to Clemson this season, or if the Tigers are still head-and-shoulders above the rest of the ACC. If all three teams keep winning, though, it’s going to set up a really fun November and December for the league.

We’re currently experiencing a surge in offensive output through the first few weeks of the 2020 season. We’ve seen some record-setting passing performances, particularly in the SEC. For today’s quiz, can you name the quarterback that leads each FBS conference currently playing football (ACC, Big 12, SEC, AAC, Conference USA and Sun Belt) in passing yards?

Even with a pared-down schedule, a few ranked teams face tough tests. Which squads are on upset alert? 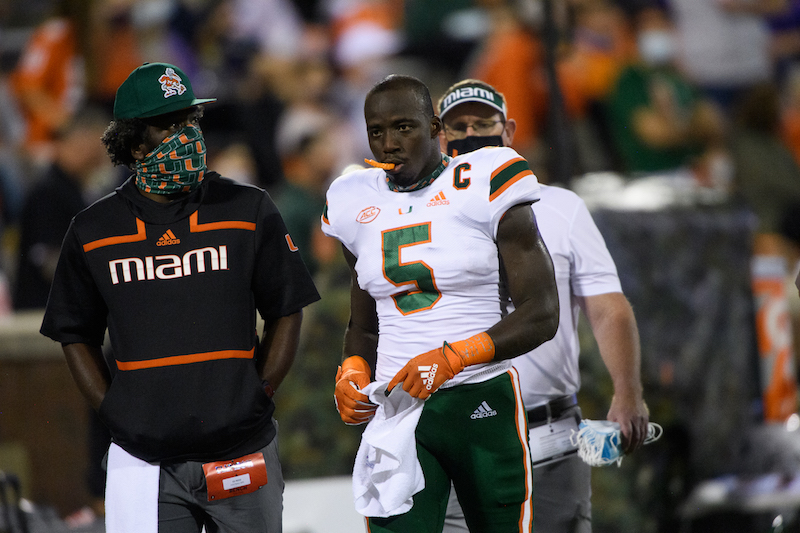 The weekend’s schedule isn’t as loaded with intense games as it was a few days ago, thanks to a few COVID-related postponements. However, there’s still plenty of action scheduled, including a couple of games tonight and several ranked teams in action on Saturday.

So, which teams need to be careful in this weekend’s games if they don’t want to end up with a bad loss on their resume? Let’s take a look at four ranked teams that are on upset alert this weekend:

As we continue to navigate the dicey waters of the 2020 football season, we’re sure to continue seeing upsets on a weekly basis. Just last week, after all, Florida and Texas bit the dust. Who will lose this weekend? We’ll find out over the next couple of days!

Here are the quarterbacks currently leading each active FBS conference in passing yards:

“I bleed orange and blue. I understand the magic of packing The Swamp and having all of our fans, especially at a home game against LSU. But really, Coach Mullen should be more focused on getting a new defensive coordinator, because we are being slammed in our secondary and going through our front lines against the run. That’s where our focus should be, not putting all of our fans and visitors to the stands and into The Swamp at risk for not only getting COVID, but also spreading COVID, not just throughout the state, but throughout the country.”

– Florida commissioner of agriculture and consumer services Nikki Fried took a shot at Florida DC Todd Grantham while discussing Dan Mullen’s “pack The Swamp” comments. The embattled coordinator can’t even watch the news without getting roasted these days! 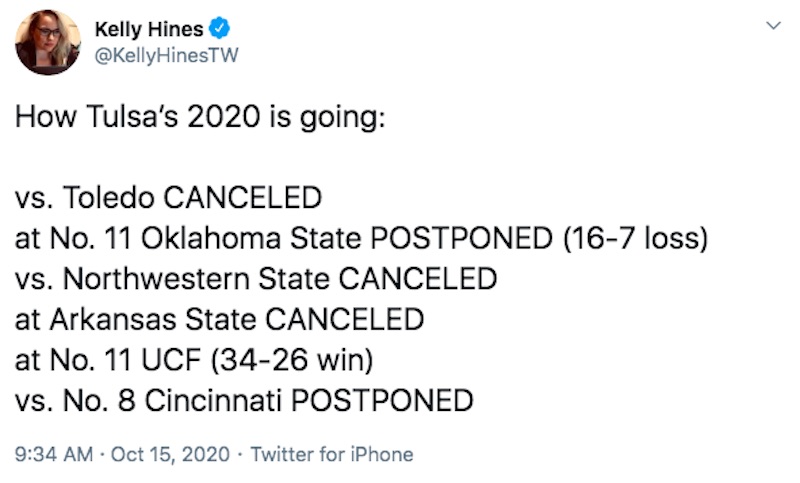 This season was always going to require a lot of patience and flexibility with regards to the schedule, but Tulsa has had a roller coaster campaign already. By the count above, that’s three canceled games, two postponed (one of which was played at a later date) and only one game played as scheduled. Hopefully the Golden Hurricanes can have a bit more luck getting games in moving forward.