Good morning and happy Friday! There’s another loaded weekend of college football ahead of us, starting with Louisville at Georgia Tech tonight. There have been some alterations made to the schedule due to Hurricane Delta, but for now, only one game (Coastal Carolina at No. 23 Louisiana) has been postponed.

In today’s newsletter, we’ll take a look at some ranked teams on upset alert, discuss SEC coaching hot seats and also dive into this weekend’s showdown between Texas and Oklahoma and whether each of the disappointing Big 12 powers can turn their seasons around. Let’s get started with today’s newsletter!

A few SEC coaches are struggling in 2020. How hot are these seats getting?

With the COVID-19 pandemic affecting college athletics budgets across the country, many analysts have speculated that struggling coaches could get a reprieve this year. After all, with budget shortfalls, paying massive buyouts to coaches won’t look great. Still, the SEC has deep pockets and not much patience, so there are a few coaches who need to improve if they don’t want to get the ax.

So, who are the SEC coaches on the hottest seats as the league prepares for Week 3 action? Let’s take a look at some of the grumblings from around the conference:

We’ve already seen one college coach (Southern Miss’s Jay Hopson) part ways with his school. Will we see some changes in the SEC? It seems highly unlikely that all four coaches mentioned above will be let go, but anything is possible. If these guys don’t start winning some big games, their seats will continue to heat up.

Even with some hurricane-related shuffling and some COVID-19 issues around the country, there’s still a full slate of college football games scheduled for Saturday. And, among those games are three matchups of ranked teams (Miami-Clemson, Florida-Texas A&M and Virginia Tech-North Carolina).

So, as we prepare for another week of exciting college football action, which teams are expected to win some of the biggest games on the schedule? Here’s a look at some of the key lines as of Thursday evening:

Will we see more chaos in the rankings like we have in the Big 12 in recent weeks, with Oklahoma and Texas both being disappointments thus far? Or, will this be a chalk weekend, with the favorites taking care of business? Tune into some of the big games tomorrow to find out!

Has Jeremy Pruitt brought Tennessee all the way back? We’ll find out on Saturday. 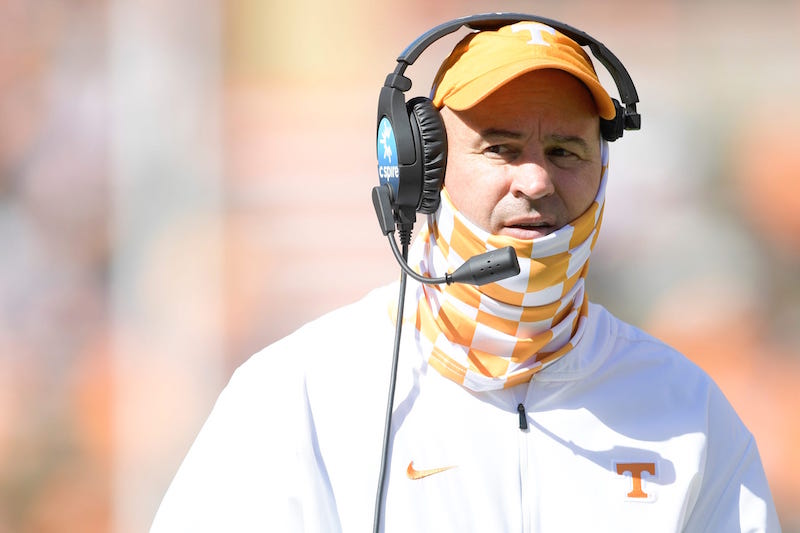 No. 12 Tennessee has a ton of momentum heading into Saturday’s matchup at No. 3 Georgia as the Vols currently have the longest winning streak in the SEC. The progress made on Rocky Top in just a season’s time has been nothing short of remarkable. Tennessee was sitting at 0-2 to start last season after losing to both Georgia State and BYU in Neyland Stadium, which led many to question whether coach Jeremy Pruitt was in over his head.

One season later and Tennessee has reached the doorstep of becoming a legitimate SEC contender — and perhaps, national title contender. For all the progress Tennessee has made, the next step will undoubtedly be the toughest as Georgia has as much talent as any team in the nation, led by perhaps the best defense Kirby Smart has fielded during his impressive coaching career.

That sounds great and all, but until Tennessee actually pulls off a victory over a top 10 opponent, Pruitt’s program isn’t “back,” and no one should make that statement until it happens.

This year has been disappointing for Oklahoma and Texas so far. Is either team still in the Big 12 race?

Typically, the Red River Showdown between Oklahoma and Texas is one of the most anticipated rivalry games of the season. But with the Sooners entering at 1-2 and the Longhorns sitting at 2-1, this year’s matchup lacks some of the appeal. We’re only three games into the season and both teams are considered out of the College Football Playoff race. Not to sound like an ESPN 30 for 30 clip, but what if I told you that wasn’t the case?

With just one loss, Texas is hardly out of the conversation, especially considering the already-wild season we’ve experienced. A win over Oklahoma would offset the loss to TCU and have the Longhorns back in the College Football Playoff conversation. The Sooners would obviously need some help, but with games against Texas, Oklahoma State and TCU on the schedule, OU could be in a great spot to compete for a spot in the Big 12 Championship Game at the end of the year. But before we talk about that, let’s dive into this year’s Red River Showdown matchup:

There’s one Big 12 team sitting around this weekend that’s going to take particular interest in this game — Oklahoma State. The 10th-ranked Cowboys are a perfect 3-0 (the only unbeaten left in the conference) and still have games against Texas, Oklahoma, Iowa State and Kansas State left on the schedule. Mike Gundy’s squad would have to feel pretty good about its chances to compete for a league title if both Oklahoma and Texas have two losses after just three conference games.

Oklahoma State also got a huge boost with QB Spencer Sanders returning to practice and working at “full speed,” according to Gundy. Right now, there’s a good chance that the state of Oklahoma is still represented in the College Football Playoff, but it’s the Cowboys, not the Sooners, currently in the driver’s seat for one of the four spots.

Upsets have been happening every week this season. How many could be in store on Saturday?

Last weekend saw some incredible upsets across the country. In fact, the same could be said of almost every weekend since the 2020 season kicked off. Thus, it seems fair to say that a few ranked teams will fall this weekend, too.

The Big 12, in particular, has been a hotbed for upsets this year. So, which top 25 teams are on upset alert this weekend? Let’s start with a Big 12 team:

Will we see any of these teams go down on Saturday? Will we see other top teams fall? Everything is in play this season. We’ve already had a handful of teams ranked in the top 10 suffer upset losses, so nothing can surprise us this weekend (probably).

Here are the 10 undefeated teams from the ACC, Big 12 and SEC as things stand right now:

How many of those teams will keep their records intact? Miami-Clemson, North Carolina-Virginia Tech and Georgia-Tennessee matchups ensure at least three teams mentioned above will lose this weekend.

“Well, I think he’s probably right. I wouldn’t disagree with him. I guess I would ask, when he’s my age, what’s he going to do? It’s a little bit of a disadvantage to be my age and have a hip replacement. I still pride myself on my ability to cover. I just don’t think I could cover him.”

– Alabama coach Nick Saban had a great response to Ole Miss coach Lane Kiffin’s quip about Saban being “elderly” and unable to cover him one-on-one. This new SEC West rivalry is already incredible.

This edition of the Saturday Football newsletter was written by Adam Spencer, Dustin Schutte and Michael Bratton.