Good morning and happy Wednesday! Even with a couple of COVID-related cancellations of games this week already, there’s still an exciting slate of games across the country this weekend. The Alabama-Georgia game will get a ton of attention, but we’ll save our preview of that huge SEC showdown for Friday’s newsletter.

Today, we’ll dive into the Alabama-Ole Miss sign-stealing controversy. Then, we’ll look at the stakes involved in this weekend’s LSU-Florida matchup. Finally, we’ll head to Austin, where coach Tom Herman’s seat continues to heat up. Let’s get started, shall we?

Alabama accused Ole Miss of stealing defensive signals. Is it true, and how big of a deal is it? 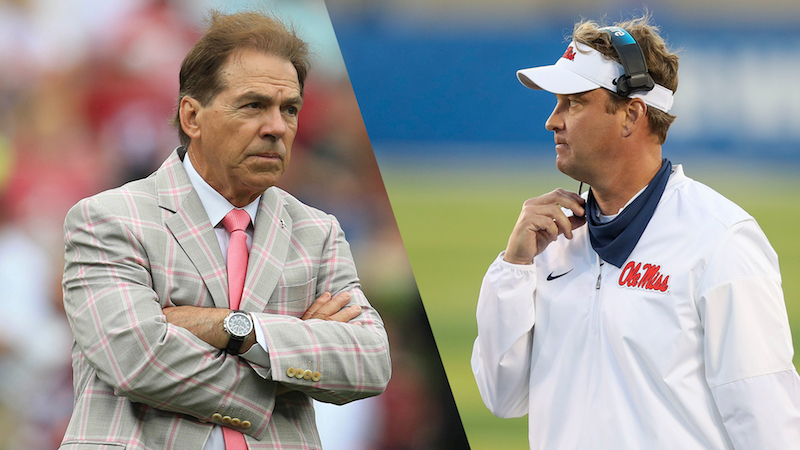 The Alabama Crimson Tide beat Ole Miss 63-48 on Saturday night in one of the most entertaining games of the year. The first meeting between Nick Saban and Lane Kiffin since Kiffin left Alabama’s staff lived up to expectations and then some. We saw multiple SEC records broken, and in the aftermath, there has also been plenty of drama.

So, what’s the issue between the Tide and Rebels now? Let’s take a look into all that’s being said about the sign-stealing allegations made by Alabama in the aftermath of Saturday’s win:

We know Alabama supporters aren’t big fans of Golding, so he’ll likely need to lead a major improvement quickly or face losing play-calling duties. For now, though, the Tide are still 3-0 and No. 2 in the AP Poll, so it’s not like the sky is falling in Tuscaloosa. Yes, this is worse than we’re used to seeing Alabama play on that side of the ball, but when you have the nation’s No. 1 scoring offense (51 points per game), it can cover up a lot of defensive mistakes. We’ll see if that continues against Georgia’s elite defense this Saturday.

As the college season moves along, recruits are getting a good look at which programs are on the rise and which coaches might be on the hot seat this offseason. That’s allowing them to gather more information before they make a final choice on where they want to play in 2021 and beyond.

There are still a number of elite 2021 recruits who haven’t made their commitments yet, so let’s take a look at the top 10 uncommitted players in the 2021 class as of Tuesday night (via the 247Sports composite rankings):

How many of these guys will make their decisions over the next month? We’ll take another look at how the recruiting rankings and top uncommitted player list looks when we reach November.

Saturday could be described as a “must-win” for LSU and Florida. Who needs to avoid the loss more? 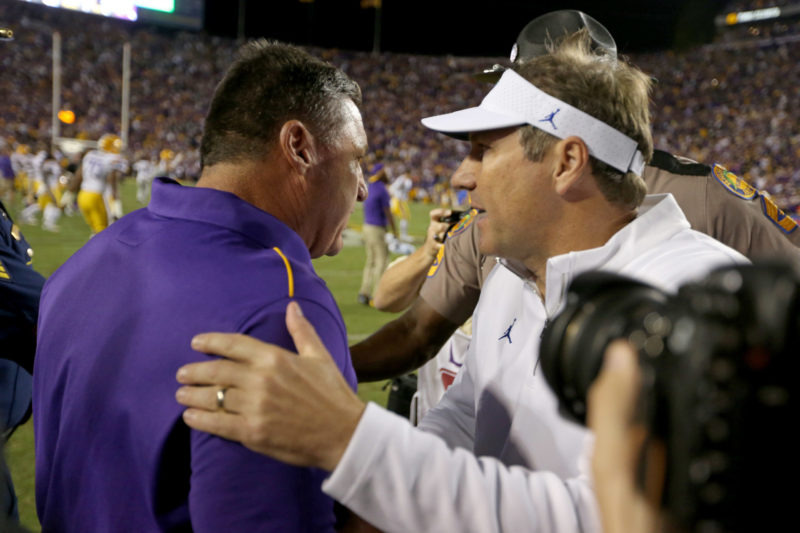 If we would’ve told you before the season that the Week 4 matchup between LSU and Florida had the potential to be one of the most important games on the schedule for both teams, your response likely would’ve been “Well, duh.” Saturday’s game is still significantly important, but for different reasons than we expected when the season started.

This year’s cross-division clash has a much different feel now that LSU is 1-2 and Florida is 2-1. Both teams lost last weekend, with the Tigers falling to Missouri and the Gators dropping a game to Texas A&M. Saturday’s matchup is an opportunity for both teams to get a bounce-back victory.

The LSU-Florida game may not have quite the same implication we thought it would before the season kicked off, but it’s still a critically important game. LSU could salvage its season with a win, and potentially knock Florida out of the SEC East race. The Gators could keep their hopes of a Playoff berth alive and really derail the Tigers’ season. We’re not talking about a Top 10 showdown right now, but there’s still going to be plenty of drama in Gainesville if the game is played on Saturday.

Texas fans are getting fed up with coach Tom Herman. Are his days in Austin numbered? 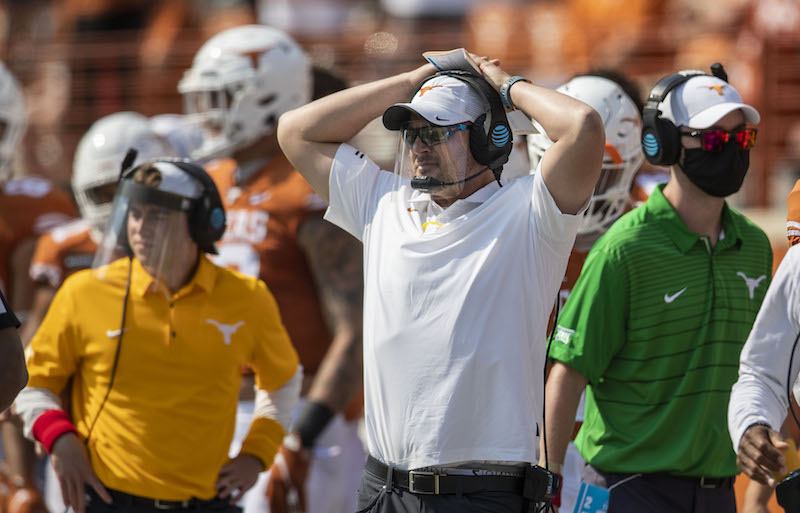 The Texas Longhorns might not be “back,” but they have certainly been an entertaining squad this season. They are only 1-2 in Big 12 play (2-2 overall), but they have a thrilling overtime win at Texas Tech, a 2-point last-second loss vs. TCU and a 4OT loss to Oklahoma in one of the best games in Red River Showdown history on their resume thus far.

Still, at a school like Texas, you have to win to keep your job, and coach Tom Herman hasn’t been doing enough of that for some fans’ and boosters’ liking. So, is Herman officially on the hot seat? Let’s take a look at what’s being said about the Texas coach:

Texas is off this weekend, then has a three-game stretch that includes home games against Baylor and West Virginia and a huge road trip to take on No. 7 Oklahoma State. Anything less than a 3-0 record in that span might bring more heat upon Herman and the Longhorns. It’ll be interesting to see how the team regroups on the field and how it handles “The Eyes of Texas” situation moving forward.

The five FBS schools that are currently allowing 40-plus points per game are:

“It’s been a wild about 3 hours. If y’all want to know the real truth, our bus company alerted us that Vanderbilt had canceled their buses and that’s when we first got wind that maybe this game wasn’t going to go on. As more and more things transpired, we got word from the SEC office that Vanderbilt had fallen below the COVID threshold. We absolutely understand. We’ve been dealing with COVID just like everyone else, so our No. 1 priority is for everyone at Vanderbilt to be safe, the players to be safe. These football contests can be made up.”

– Mizzou coach Eli Drinkwitz shared the bizarre way the Tigers learned their game against Vanderbilt was being postponed during an appearance on “The Paul Finebaum Show.” The game, originally set for Saturday, has been moved to Dec. 12 after the Commodores fell below the acceptable number of scholarship players available due to COVID-19 and contact tracing.

During a win over Miami on Saturday, star Clemson QB Trevor Lawrence drew a flag for unsportsmanlike conduct after he spiked the ball and got in a defender’s face after a touchdown run. Coach Dabo Swinney joked that Lawrence would draw kickoff coverage duties if he did it again.