It’s easy to get caught up in spring game hot takes. After all, it’s been a few months since we’ve seen live action. A chance to see players battle it out in a game-like setting often leads to some rash opinions.

There were no shortage of those thrown around after watching Saturday’s slate of scrimmages. These were four overreactions from the weekend:

1. Minnesota’s offense will be significantly better in 2017

Wait, hasn’t everyone been saying the Gophers will look like a different team under P.J. Fleck? Yes. Down the road, Minnesota football historians shouldn’t have any problems differentiating the Fleck era from the Tracy Claeys/Jerry Kill era.

I mean, when was the last time you saw a play like this from a Minnesota offense?

But declaring Minnesota’s offense is bound for major strides after Saturday would be premature for a few reasons.

While the Gopher quarterbacks did look impressive in their first live action, they were playing against a new-look defense. Minnesota is replacing plenty of talent from last year’s unit, not to mention one of the nation’s more underrated defensive coordinators in Jay Sawvel. It’s hard to evaluate an offense when you don’t know the kind of competition it’s playing against.

For now, hold off on assuming Minnesota will have a high-powered offensive attack in 2017.

2. The Blackshirts will still struggle under Bob Diaco

We knew going into Saturday that we weren’t going to learn anything about Diaco’s new 3-4 defense. Why? He didn’t plan on running it. Instead, Nebraska ran some sort of 4-2-5 with varied results.

Spring games are rarely lopsided, and some wonderws how one team could score 55 points. You could probably chalk that up to a lot of things. Tanner Lee made some NFL throws in coverage, the offense didn’t face much second-level pressure and the teams weren’t split evenly.

There were some defensive highlights, too.

Yes, there were also missed tackles and miscommunications on defense. Those things are correctable. Still, this comes back to Diaco’s desire to keep everything under wraps. His success depends largely on his ability to generate pressure in creative ways and he didn’t feel Saturday was the time to reveal any secrets.

It might be a good idea to wait until that Oregon game to jump to any conclusions about Diaco’s impact.

3. Ohio State’s secondary is in trouble

Saturday seemed like opposite day in Columbus. Ohio State receivers were open all over the place and the Buckeye secondary didn’t seem to have an answer.

On paper, one would chalk that up to looking like a group that just lost three underclassmen to the NFL draft, all of which could go in the first round. While the Buckeyes did have major turnover on the back end, Saturday’s lackluster performance wasn’t a true barometer for this unit.

Keep in mind that Ohio State essentially played two-hand touch during the first half. Not only did skill players play with backyard football rules, but the lack of a true pass rush didn’t exactly help out the young defensive backs.

Speaking of young defensive backs, the Buckeyes had a few talented early enrollees (Jeffrey Okudah and Shaun Wade) get significant playing time. Keep in mind that technically, they should still be in high school. If they’re already shutting down Ohio State’s wideouts after three months on campus, the Buckeye receivers would have some serious questions to answer.

It’ll take time for Greg Schiano and Kerry Coombs to work their magic with this group. It’ll also probably help when they get to play with normal football rules. 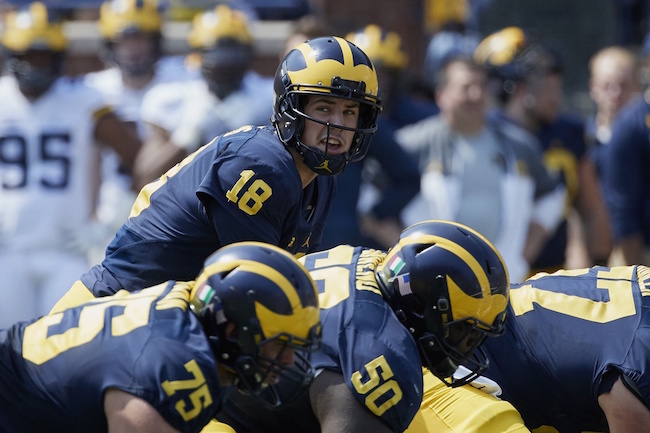 I know, I know. I already wrote after Michigan’s spring game on Saturday that the day shouldn’t have changed any opinions you have about Wilton Speight.

There’s nothing wrong with opinions changing about Peters. After all, the former four-star recruit looked better than Speight. There’s no denying that.

Even though Michigan had a more consistent pass rush than most spring games, Peters’ performance was still an extremely small sample size. Putting a redshirt freshman ahead of a returning starter like Speight, who led the B1G in QBR in 2016, is premature.

Peters should say that he’s competing for the starting job, just like he did after Saturday’s spring game. It’d be odd if he didn’t.

Speight also said the right thing. At this point, Peters is motivation for him. If Speight regresses come September, there will be a talented replacement waiting to step in (don’t forget about John O’Korn).

Like Dwayne Haskins did earlier in the day in Columbus, Peters gave a passionate fanbase a reason to be excited about the future. But in the present, the starting job — and control of the offense — still belongs to Speight.