A day before the first College Football Playoff poll, there’s plenty of forecasting going on.

Fans look ahead and try and predict wins left on the schedule. As we’ve seen in year’s past, the playoff picture could look vastly different in a month.

Some matchups are scarier than they appear. On Halloween, we took a look at some of the scariest matchups left for B1G contenders.

To clarify contenders are teams legitimately competing for a division crown. And games against ranked foes are not sleepers. Nobody is sleeping on that regular season finale in Columbus.

Michigan could be a 20-point favorite for this one, but Indiana is still a scary matchup for a variety of reasons.

Start with last year, when the Hoosiers were one goal-line stop away from handing Michigan a deflating late-season loss.

Kevin Wilson’s offense is different to prepare for than most. The Wolverines defense is vastly improved, but it still could struggle against IU’s spread attack, especially if Richard Lagow starts to cut down on the turnovers.

There’s also the timeliness of it. What’s a week away? Oh, nothing. Just maybe the biggest showdown between Michigan and Ohio State in a decade.

If the Wolverines sleep on IU, they won’t be unbeaten heading into Columbus. 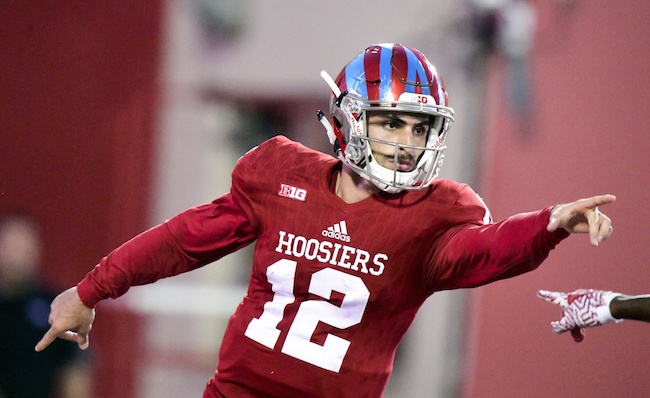 If Penn State takes care of Iowa, it’ll be riding a five-game winning streak into the road tilt at Indiana. With games to end the season at Rutgers and home vs. Michigan State, the Lions will start to hear even more chatter about a possible three-way tie atop the B1G East.

But as previously said, those Hoosiers are not to be taken lightly. They gave Ohio State everything they could handle and with the exception of the Buckeyes and Wolverines, the Hoosiers have the best defense the Lions have seen all year.

There might even be a little assumption that because the Lions earned one of their rare blowout wins against IU last year, 2016 will also be a walk in the park. James Franklin brought juice boxes so that they wouldn’t lack any juice in their first sleeper game at Purdue.

Franklin might buy each player a cooler full of juice to avoid a letdown in Bloomington.

What was supposed to be one of the games of the year in the B1G isn’t looking quite as promising as it once did. That’s all the more reason why it can be a sleeper.

Sure, MSU is going through its worst season in a long time, but the Michigan game said a lot. The Spartans didn’t quit. The second half was a reminder that MSU isn’t dead yet. The Spartans would love to play spoiler for OSU. Again.

A lot of the same MSU defenders that led last year’s stunner in Columbus are still around. It’ll be senior day in East Lansing, too. Anybody expecting MSU to lay down for the Buckeyes is mistaken.

OSU looked like a different team in October than it did in September. Everyone expects the Buckeyes to run the table and have that all-important regular season finale against Michigan.

Get caught looking ahead and that game won’t have nearly the significance.

When was the last time Wisconsin won in Evanston? Here’s a hint: It wasn’t this century.

That’s right. The last time the Badgers won in Evanston, it was in 1999 when Ron Dayne was running the show. Maybe there’s something to be said for a run-heavy team playing on a grass field all those years. Who knows?

Wisconsin hasn’t won at Northwestern since 1999. In other words, the Badgers haven’t won in Evanston since Ron Dayne left. pic.twitter.com/WR0f5r2KbO

Coming off a huge win against Nebraska, the Badgers are feeling confident. They’ll inevitably be in the top 10 for the release of the first College Football Playoff poll on Tuesday night, and they’ll hear many saying they should win out.

But besides their historical and recent success — the Wildcats won the last two matchups — Northwestern played like a top-25 team all October. The Wildcats have the B1G’s best receiver in Austin Carr and like J.T. Barrett, Clayton Thorson has mobility that could give the Badgers problems.

This might’ve been chalked up as the first easy game after Wisconsin’s brutal start to the season, but it appears the Badgers’ gauntlet will last into November.

Nothing Iowa did this year would suggest that the Hawkeyes could take down a top-10 team. In fact, the Hawkeyes haven’t done that since 2010. There will be plenty of people penciling Michigan to roll until it reaches Columbus.

The Wolverines have, at times, been vulnerable against the run. Iowa has two capable backs and a line that could be much healthier in a couple weeks. C.J. Beathard will also be the most-experienced quarterback Michigan will have seen. Will he be less rattled by Don Brown’s pressure?

This game could also be scary for a team that left the state of Michigan once before the mid-November showdown. Iowa City, even in a disappointing year, will be rocking for the primetime showdown.

Ask Urban Meyer, who had the best road winning streak in the country, how hard those primetime showdowns away from home can be. Michigan will have the same kind of target on its back.

The Hawkeyes would love nothing more than to take aim at Michigan’s run to the College Football Playoff.