Welcome back to the Starting 5. The Starting 5 is written multiple times per week by Adam Spencer to keep you up-to-date on all the news and events in the world of college hoops. You can follow Adam on Twitter at @AdamSpencer4 and @SDSBasketball.

Alabama is cruising through SEC play. The Crimson Tide are 9-0 against SEC competition entering Saturday’s brief reprise from league play. They’ll take on No. 24 Oklahoma in Norman in a game that is suddenly much more interesting than it appeared when the SEC/Big 12 Challenge pairings were announced.

It’ll be an interesting test for the Crimson Tide against a non-SEC foe, but coach Nate Oats has his team firing on all cylinders and doing exactly what it needs to do to win. It seems simple, but the Crimson Tide are maximizing the potential of every offensive possession by essentially eliminating mid-range jump shots.

The Tide’s 70-59 win over Kentucky on Tuesday night wasn’t as comfortable as the final score indicated, but look at this shot chart: 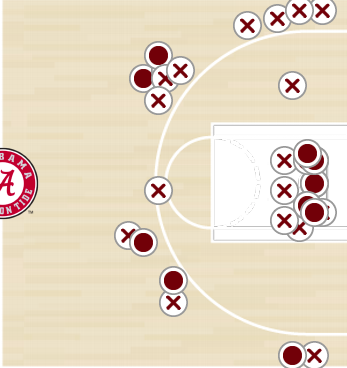 Only 2 shots on that chart weren’t from 3-point range or in the paint. And you can bet the 2 shots that were outliers absolutely infuriated Oats.

Here’s the shot chart from the win over Mississippi State last weekend: 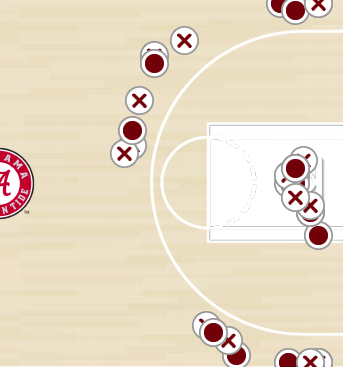 Oats will look at that and say it’s a perfect shot chart. Finally, here’s the chart from the record-setting win over LSU in which the Tide made 23 3-pointers: 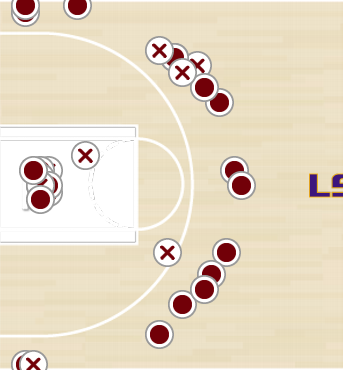 You get the idea. Launch 3s early and often, get to the paint (and the free-throw line) and eliminate low-percentage 2-point shots.

But, it’s not just launching 3s with a defender in your face. So, how do you create open 3s? Well, you get into the lane and kick it out to an open shooter. Here are a couple of instances of the Tide doing just that. In the first clip, freshman Josh Primo knocks down the shot. In the second, Jahvon Quinerly hits a big 3 at the end of the first half:

Drive-and-kick basketball is what has made James Harden an MVP in the NBA. He currently leads the NBA in assists with 11.1 per game. The previous 3 seasons, he’s led the league in scoring. The Crimson Tide are bringing elements of that style of play to the SEC, and are having a ton of success doing it.

They look like the favorites to win the SEC. But, can they win the NCAA Tournament, too? That’s the big question. SEC Network broadcaster Tom Hart recently appeared on “The Paul Finebaum Show” and explained why he thinks a national championship is in the realm of possibility for the Tide:

Hart mentions how Alabama’s defense is pretty darn good, too. Indeed, with SEC Player of the Year frontrunner Herb Jones leading the way, the Tide can stifle opponents on defense. Look at this possession in the first half of the Kentucky game:

The Wildcats couldn’t find space to get a shot off over the course of 30 seconds. That’s horrendous offense on Kentucky’s part, yes, but it’s also Alabama doing everything right.

The question is whether or not the Tide can continue to do everything right. As Hart mentions, this is a crazy year in the college basketball world. Anything can happen in the NCAA Tournament. He says Alabama will have to win on an off night.

Well, the Tide showed they could do exactly that against Kentucky. He also said they’ll have to beat a team they shouldn’t. We’ll find out in March if they can do that.

For now, though? I agree with Hart — anything is possible these days. Why couldn’t the Tide win it all?

Now, let’s move on to some other SEC headlines.

Auburn PG Sharife Cooper hasn’t been eligible for the Tigers for very long, but he’s already become a verified superstar.

And, let’s just say he got the superstar treatment against Mizzou on Tuesday night. I’m a Mizzou grad, yes, but I’m not bitter, I promise. I was wary of this game for the Tigers heading into Tuesday’s action, as Mizzou has struggled against dominant point guards in SEC play:

All I was saying about Mizzou entering this game is they usually struggle against ball-dominant guards.

Vescovi torched them in the first Tennessee game. (Kept in check in the second.)

DJ Stewart torched them in the MSU loss.

OF COURSE Sharife was gonna be a problem tonight.

Cooper finished with 28 points, 8 rebounds and 7 assists. But, he was only 5-for-12 from the field and 0-for-2 from 3-point range. He did his damage at the free-throw line, where he was an incredible 18-for-21. See, that’s where the superstar treatment comes in.

Mizzou only made 18 free throws all game (which is largely the fault of big man Jeremiah Tilmon, who went an abysmal 3-for-11 from the charity stripe). Now, to show you I’m not just complaining as a Mizzou fan, this is just awful defense:

Did the refs suck last night? Yeah, they always do.

But you don’t get to play this defense all night and then complain about a free throw disparity afterwards.

Sorry for harping on it multiple times, but I mean c’mon.

There were some questionable calls, but Mizzou didn’t put itself in a position to win. When Cooper was on the court, Auburn was unstoppable. When he was in foul trouble, Mizzou controlled the game.

Unfortunately for Cuonzo Martin and company, they couldn’t keep Cooper off the court for long enough. When he’s on the floor, he’s by far the best player. I mean, look at this insane lob pass:

I’ve mentioned how much I like how Flanigan cuts with a purpose and this is another great example.

Because he comes around the first screen so hard, his defender doesn’t even see the 2nd one coming until Al was already around it.

Easy find for Sharife for the lay in oop. pic.twitter.com/oZcSVKmMXq

That’s a guy who’s simply on another level when it comes to passing. He might be the best passer this side of the Mississippi River (with Gonzaga’s Jalen Suggs holding that title for the Western United States).

Anyway, Cooper is going to need to be an even bigger superstar if the Tigers are going to take down No. 2 Baylor on Saturday. More on Baylor later.

Last possession before Kentucky has to start fouling. The goal is to get the ball to Olivier Sarr. Once they do there is just no spacing. Three players in a pile out front. Allen runs toward the ball along the baseline. Just nothing there. @KentuckyRivals pic.twitter.com/9gcNTA9IcZ

Today’s Play of the Day is LSU Freshman Cam Thomas. Had 32 points in this game with 5 3’s. Does a nice job of rising up, hitting a quick fake into a 2 dribble step back squaring up his body and knocking down a contested 2. #NBA #NBATwitter #NBADraft pic.twitter.com/c1Kv4bX8N8

Now, let’s move on to some non-SEC stories from around college basketball.

We’ve talked a lot about the Baylor Bears this year, and for good reason. They’re the No. 2 overall team in the country and have remained perfect thus far. They picked up an easy win this week, thoroughly embarrassing Kansas State for the second time this season.

The Bears led by 28 (54-26) at halftime. That was their second-largest lead at halftime of a Big 12 game in program history. Interestingly, their biggest halftime lead ever in a Big 12 game was 29, which came against … Kansas State … back in December (when they led 56-27 at the half):

Via @ESPNStatsInfo:   Baylor’s 28-point halftime lead over Kansas State is its second-largest ever in a Big 12 conference game — with its largest (29) coming in December … against Kansas State.

This time, the Bears did better than the 100-69 final score they compiled in December, embarrassing the Wildcats 107-59. That’s right, a 48-point victory in conference play. That’s insane.

And, to make things more interesting, former Auburn guard Davion Mitchell led the Bears in scoring with a career-high 31 points (including a 7-for-9 mark from 3-point land):

Why is that interesting? Well, Mitchell will get to play his former team on Saturday, when Auburn comes to Baylor as part of the SEC/Big 12 Challenge. More on that game in a bit.

For now, let’s take a look around the rest of the college basketball landscape:

Little behind on Creighton vs. Seton Hall but saw this set play from Greg McDermott and couldn't resist breaking down what makes it so special pic.twitter.com/sc3PjM524p

Now, let’s take a look ahead to the weekend’s top college basketball games.

There are some great games this weekend, starting with a huge Big Ten showdown in Champaign on Friday night. Then, we’ll shift our attention to Saturday’s SEC/Big 12 Challenge. Here are the 5 games I can’t wait to watch this weekend:

It’s another loaded weekend of college hoops, and we’re not even to February yet. This season is just heating up, folks!

Now, let’s answer a couple of random questions before we get out of here for the day and enjoy our weekends:

Which conference will win the SEC/Big 12 Challenge?

Saturday’s SEC/Big 12 Challenge features 10 games, some good, some not so good. Can I be boring here? I think it will end in a 5-5 tie. From the SEC I have Alabama beating Oklahoma, Tennessee beating Kansas, Mizzou taking down TCU, Texas A&M beating Kansas State and Mississippi State downing Iowa State. From the Big 12, I have Baylor over Auburn, West Virginia over Florida, Texas Tech over LSU, Oklahoma State over Arkansas and Texas over Kentucky. That’s 5-5. Hopefully I’m wrong, though. These things are always more fun when one side or the other wins.

What does Sharife Cooper have to do to be the No. 1 overall pick in the 2021 NBA Draft?

I don’t think it’s going to happen. But, with how much analysts seem to enjoy comparing him to Ja Morant (the No. 2 pick in the 2019 NBA Draft) these days, I suppose it could be possible. I still think Oklahoma State’s Cade Cunningham is the No. 1 pick, just because NBA teams will fall in love with his size and versatility. If not Cunningham, Gonzaga freshman PG Jalen Suggs could slide into that top spot. But, don’t count out Cooper just yet. If he starts knocking down 3s at a higher rate, he could certainly see his draft stock climb even higher!

Enjoy the Starting 5? Have a question? Want to yell at me about something? Follow me on Twitter @AdamSpencer4 or email me at ASpencer@SaturdayDownSouth.com.

RECENT ARTICLES
BIG TEN
Which B1G quarterbacks will pass for 3,000 yards in 2021?
BIG TEN
B1G to allow fans at conference tournament in Indianapolis
BIG TEN
Here's where every B1G team ranks on KenPom with 1 week before B1G Tournament
BIG TEN
50 B1G players earned an invite to the NFL Combine. A breakdown by school