Welcome back to the Starting 5. The Starting 5 is written multiple times per week by Adam Spencer to keep you up-to-date on all the news and events in the world of college hoops. You can follow Adam on Twitter at @AdamSpencer4 and @SDSBasketball.

If you know college basketball, you know that the biggest threat to a zone defense is a team that can knock down 3-pointers at a high rate. So, if you’re scouting the Alabama Crimson Tide and discover that they’ve made an SEC-best 240 3-pointers this season, and that they’re knocking them down at a 36.6% clip (good for second in the SEC), you would probably not use a zone defense against them, right? Right?

Well, that’s not the strategy Tom Crean and the Georgia Bulldogs went with on Saturday, and boy, was it ever a mistake. For a sizable chunk of the first half, the Bulldogs were in a 2-3 zone look, and Alabama torched the Dawgs for 51 first-half points.

By the time the Bulldogs went back to more man-to-man defense in the second half, it was too late, as the Crimson Tide shooters were brimming with confidence. The final result? A 115-82 win for the Tide. That’s the most points Alabama has ever scored in an SEC game.

Just look at how easy it was for the Tide to break the Georgia zone early. You want to get the ball to the high post and have that guy look for an open shooter. This Jahvon Quinerly-to-Herb Jones-to-John Petty Jr. sequence is textbook:

Simple, yet effective zone set. Georgia is in a matchup 2-3… Ellis's cut from the corner to the top of the key frees up the middle of the paint and leaves #14 alone to guard two. Herb finds Petty for a wide open triple. pic.twitter.com/tFOocvuPzZ

You can also drive into the lane and kick it out to a shooter, as Jaden Shackelford demonstrates here, finding Herb Jones:

Shackelford has really improved as a ball handler. Great split and kick to the corner. pic.twitter.com/C7oy8MnqA6

That Shackelford play is a lot like what the Houston Rockets used to do when James Harden was playing for them. Get in the lane and make a layup, draw a foul or find an open shooter behind the arc. As you can see from Alabama’s shot chart from Saturday’s game, that’s exactly coach Nate Oats’ plan: 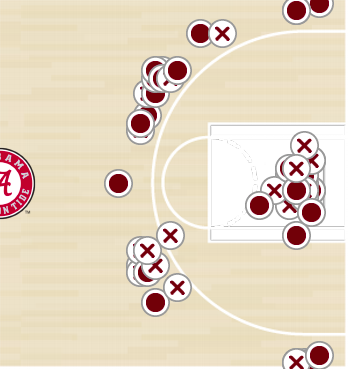 Look, Georgia is not a good defensive team no matter what scheme it is playing. The Bulldogs have allowed an SEC-worst 84.8 points per game this conference season. But, when their coaches don’t put them in position to succeed, things get even uglier.

Alabama’s offense entered that game struggling a bit (by its lofty standards). If this hot-shooting game (the Tide went 18-for-30 from 3-point range) reawakens this dynamic offense, the other SEC teams on Alabama’s schedule will be cursing Crean.

Now, let’s move on to some of the other SEC headlines from the weekend.

There are several great freshmen in the SEC this year. There’s Moses Moody at Arkansas, Keon Johnson at Tennessee, Josh Primo at Alabama and, of course, Sharife Cooper at Auburn. But, 2 of the best freshmen in the league went head-to-head on Saturday when LSU and Tennessee met in Baton Rouge.

Those 2 players would be Jaden Springer of the Vols and Cam Thomas of the Tigers. Thomas is currently trying to become the first freshman since fellow LSU Tiger Mahmoud Abdul Rauf to lead the SEC in scoring:

Cam Thomas: 22.6 PPG ♨️@24_camthomas is trying to become the first freshman since @RaufMahmoud to lead the SEC in scoring. @LSUBasketball 🐯 pic.twitter.com/62kD45ZfMq

He didn’t disappoint in LSU’s 78-65 win over the Vols. He had a game-high 25 points and made some NBA-caliber shots. This tough 3-pointer over some good Tennessee defense showcases his catch-and-shoot skills:

Thomas got his wins in too during this battle, tough catch and shoot 3 off the DHO against Springer here who's got a hand up in his face. Just doesn't matter, Thomas is easily one of the best scorers in this 2021 draft class and maybe the best tough shot maker. pic.twitter.com/hjnh8ilyD0

He can score in the lane, too. This floater in traffic was as difficult as it gets:

This is really damn good defense from Springer again, good fundamentals, shuffles well, shows the lateral quickness to stay in front of Thomas but it just doesn't matter. Thomas hit's an insane floater off the glass, just has a knack for making tough shots look easy. pic.twitter.com/9AQvMnNKgA

Springer only finished with 21 points, but he had a more versatile game, grabbing 6 rebounds and dishing out 7 assists. He showed off his NBA range, too:

Just finished watching LSU-Tennessee from yesterday, what a fun battle between Cameron Thomas (25 Pts) and Jaden Springer (21 Pts, 7 Ast, 6 Reb). Two guys, I think ultimately should be top ten selections. Springer reminds me of Brandon Roy, the set up to this 3 is so smooth. pic.twitter.com/Br25wn4BbZ

Oh, and you want to see him get into the lane like Thomas? Well, how about this difficult shot?

Ultimately, of the two I'm more impressed with Springer although I believe in both guys potential. Again I just can't get Brandon Roy out of my mind when watching Jaden Springer play. Another showcase of the smoothness and footwork, great attack on the switch. I'd take him Top 5. pic.twitter.com/pvX8US723c

Those guys are both going to be contributors in the NBA, probably by this time next year. Can either of them win the SEC Freshman of the Year award? Well, they’ll have their work cut out for them down the stretch, as the competition is fierce this year.

Now, let’s look at some other SEC stories from the weekend:

UK had two GREAT play calls late to ice the game. Back screen lob off the stagger out of the box set. It worked so well Isaiah Jackson is open on the first cut as well. Both he & Keion Brooks men get caught in the back screen action. Easy possession. @KentuckyRivals pic.twitter.com/33WfwyOUyx

Game winner by Davion Mintz. They had this the play earlier but couldn’t execute & Auburn tied it. Ballscreen occupies the top & the backside is overloaded. Mintz steps into the slot. Ball is reversed & now it’s two on one. HORSE shot. @KentuckyRivals pic.twitter.com/gJQDufJOWp

3️⃣ @justinsmith3_ just checking the weather above the rim ❄️
2️⃣  UP IN OT
1️⃣ @moses_moody3 with the game clenching steal 😤 pic.twitter.com/6dXXiIeRr5

Next up, let’s take a look around the rest of the college hoops world.

I mentioned in a recent Starting 5 that Iowa big man Luka Garza might be losing his stranglehold on the National Player of the Year awards. I had Gonzaga’s Corey Kispert and Illinois’ Ayo Dosunmu as the potential challengers to Garza’s throne.

Well, I’m glad I had Dosunmu on the list, because he continues to be incredible. Yes, Illinois needed overtime on Friday night to beat a bad Nebraska team, but the Illini would have lost without Dosunmu’s heroics.

He finished with 31 points, but he actually got off to a bit of a slow start. He finished strong, though, scoring Illinois’ last 10 points in regulation to force overtime. Then, he scored the Illini’s first 5 points in the extra period. Here are a couple of his late-game highlights. Look at the degree of difficulty of these shots:

Ayo Dosunmu puts a bow on this one. He finished with 31 points for @IlliniMBB. pic.twitter.com/9xHNNT20qH

His highlight reel from the game is full of 3-pointers, buckets in transition and finishing through contact at the rim. He can create his own shots and has a nice mid-range jumper, too:

Kofi Cockburn is a great Robin to Dosunmu’s Batman, as he had 21 points and 13 rebounds against Nebraska. But, if the rest of the team doesn’t step up more consistently, the Illini will only go as far as Dosunmu can carry them.

Now, let’s look at some other stories from around the country:

No. 12 Oklahoma beats No. 14 WVU in double OT pic.twitter.com/balhCAAAyO

Next, let’s look at some of the top games over the next few days.

Snowstorms across large parts of the country and the continuing COVID-19 pandemic have wreaked havoc on this week’s schedule. But, there are still some intriguing games on tap between now and Friday. Here are the 5 games I can’t wait to watch this week:

Double-check all these dates and times, as they are certainly subject to change. Still, if these 5 games are played as currently scheduled, they should be some entertaining ones to watch!

Now, let’s answer a couple of random questions before we get out of here for the day:

Who is your favorite college hoops player of all-time?

I loved watching DeMarre Carroll during my first year at Mizzou, but I’ll have to go back a little further to find my all-time favorite college hoops player. I’m probably going to go with either Deron Williams or Dee Brown on that 2004-05 Illinois team. I was in high school at the time and still remember where I was when the Illini had that insane comeback against Arizona in the NCAA Tournament. That was probably my favorite game ever, and Brown and Williams played big parts in it. Those were some really fun players to watch.

Should the men’s game follow the NBA and the women’s game by moving to quarters? Or should it keep its 2 halves style?

My honest answer to this question is that I don’t care one way or the other. I think either way would be fine. There are some advantages to the quarters system, but I think there are bigger problems facing college basketball than whether to ditch the halves system or not (the block/charge call, for instance). I don’t mind the 2 halves system, so I say keep it for now. Don’t rock the boat if you don’t have to.

Enjoy the Starting 5? Have a question? Want to yell at me about something? Follow me on Twitter @AdamSpencer4 or email me at ASpencer@SaturdayDownSouth.com.