Every year, Phil Steele puts together more information in one publication than anybody else in the college football world. There are trends, predictions, key stats and just about everything you could ever want in a college football preview magazine.

As always, a few of those things stand out.

Here are the 20 most interesting B1G nuggets from Phil Steele’s 2016 preview magazine:

-Steele: Michigan CB Jourdan Lewis is only a fourth-team All-American

Some publications had the Michigan senior as a first-team All-American last year. Pro Football Focus has Lewis as the No. 7 player overall in college football. So Steele saying that Lewis isn’t even a third-team All-American — behind a sophomore like Alabama’s Marlon Humphrey who never made an all-conference team — is a bit of a surprise.

With all due respect to the Badger veteran, this is going out on a limb. He was a second-team All-B1G selection in 2014 but he suffered a season-ending knee injury in 2015. He’s still coming back from that. I’m not saying it can’t be done, but there aren’t many guys who undergo major knee surgery and make that big of a jump the next year.

-Steele: Penn State’s running backs are only ranked No. 20 nationally

No love for Saquon Barkley, eh? The dynamic sophomore could easily finish the season as one of the top backs in the country. And oh, the top 2016 tailback, Miles Sanders, just got to Happy Valley. Under Joe Moorhead, this group should exceed that No. 20 ranking. 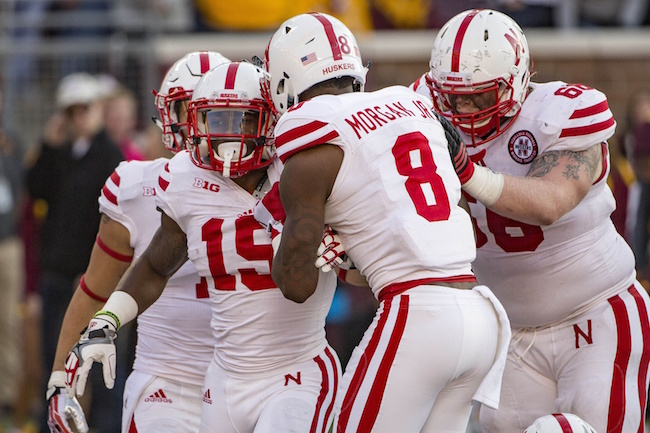 -Steele: Nebraska’s receivers are only ranked No. 17 nationally

Speaking of units that weren’t ranked in the top 10 that should’ve been, No. 17 is too low for an experienced group of Husker receivers. Jordan Westerkamp, De’Mornay Pierson-El, Stanley Morgan Brandon Reilly and Alonzo Moore make up what might be the best group of five receivers in the B1G. And tight end Cethan Carter is a talented pass-catcher who will make his presence felt. If Pierson-El stays healthy, this could be a top-five group nationally by season’s end.

Bruce Feldman had Michigan’s DL ranked No. 1. Pro Football Focus had three Michigan defensive linemen ranked in its top 101 players in the country. That didn’t include breakout candidate Bryan Mone. It also didn’t include Taco Charlton, nor did it include No. 1 overall recruit Rashan Gary. As long as Ryan Glasgow is healthy, this unit will excel against the run under new defensive coordinator Don Brown.

-Minnesota, Maryland and Purdue are the teams most likely (nationally) to benefit from an easier schedule in 2016

The Gophers topped Steele’s list, and not surprisingly. Zero non-conference road games coupled with crossovers against Maryland, Penn State and Rutgers explain that. Purdue isn’t slated to win many more games, but at 2-10 in 2015, the only way to go is up. Maryland, despite having a brand-new coaching staff, is also a candidate to best three wins with zero non-conference games against Power Five teams and home games against Purdue, Minnesota and Rutgers.

And that’s just in the first seven games of the year. Need I say more?

Well, there shouldn’t be any excuses for Purdue in 2016.

-Ohio State is the least experienced team in the country

Well, there shouldn’t be any excuses for Ohio State in 2016. 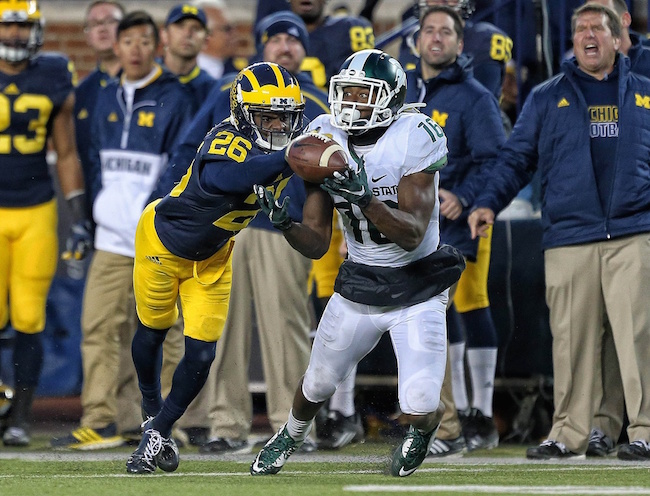 In other words, Michigan had the most amount of its best players returning and Michigan State had the least. The Wolverines return a pair of All-Americans and seven players who received All-B1G honors. MSU, on the other hand, lost four All-Americans and all five of its first-team All-B1G players are gone. If there was ever a time for Michigan to swing momentum of the rivalry back, this year is it.

Speaking of the Spartans’ youth, Steele made the bold prediction that the versatile Spartan freshman would have quite the freshman season. There’s been plenty of hype surrounding the early enrollee all offseason, and this only adds to it. Bold it is to say that the true freshman will have a better season than established veterans like Amara Darboh and Janarion Grant.

-The top seven B1G kick returners from 2015 are back

Take a look at the special teams talent returning (forgive the unavoidable pun):

Oh, and that DOESN’T include Will Likely, RJ Shelton, De’Mornay Pierson-El or Jabrill Peppers, all of whom are a touchdown waiting to happen. Get ready for some special teams TDs in the B1G.

If there’s anything that speaks more to Dave Aranda’s brilliance, this is it. The former Wisconsin defensive coordinator led the nation’s top scoring defense by allowing an average of 137 points per season. Wisconsin’s +166 advantage in average yards per game is 27 yards better than second-place Michigan State. The Badgers actually have a greater advantage than Alabama (+134) and the entire SEC. Actually, the only Power Five teams better than the Badgers in that category over the last three years are Baylor and Clemson. 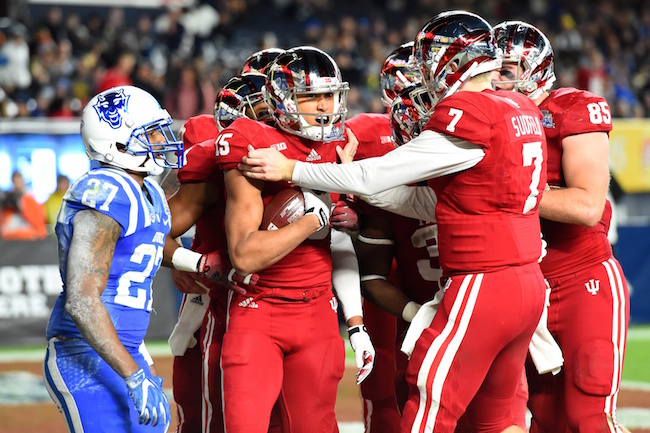 -Steele: Indiana will have its first winning season since 2007

At Indiana, that’s awfully bold, especially considering the Hoosiers lost all-time passing leader Nate Sudfeld and All-B1G tailback Jordan Howard. Steele is doubling down after putting the Hoosiers on his “Most Improved List” a year ago. IU does have a soft non-conference schedule and four home games against teams with sub-.500 conference records in 2015. If new defensive coordinator Tom Allen can just make the IU defense mediocre, the Hoosiers could make Steele look smart again.

-Rutgers allowed 6.5 yards per carry in their last six games

Yikes. Sure, the Scarlet Knights were depleted, but that number was the main reason that the Knights didn’t win one of their final six games. Why am I pointing that out? Because I don’t think Chris Ash’s team will allow 6.5 yards per carry once in 2016. His rugby-style tackling will maximize the unit’s limited potential. On top of that, Darius Hamilton will be back. If he returns to form, you won’t find this stat in Steele’s 2017 preview guide.

-Steele: Iowa is the No. 3 surprise team in CFB

Iowa still qualifies in Steele’s eyes as a surprise team because the perception that 2015’s 12-0 regular season was fueled by a weak schedule. That’s the same reason he predicted success for the Hawkeyes in 2016. He has a point. The Hawkeyes’ only road game against a team that finished above .500 is Penn State. Their only game against a team in the preseason top-25 is home against Michigan. Once again, the deck is stacked for an experienced Iowa team to get to Indianapolis.

-Despite 6-2 B1G record, Northwestern was out-gained by an average of 39.3 yards per game

If you wonder why some are predicting a regression for the Wildcats in 2016, this stat could be why. Part of this was because the Wildcats’ losses came by a combined 117 points (there were only three). They won their six B1G games by 54 points. That’s more a reflection of how much Northwestern struggled on offense. Sure, Justin Jackson is one of the B1G’s best options at tailback, but he can’t do it alone in 2015. Without Dan Vitale, Northwestern has major offensive questions to answer if it wants to avoid falling back to mediocrity. 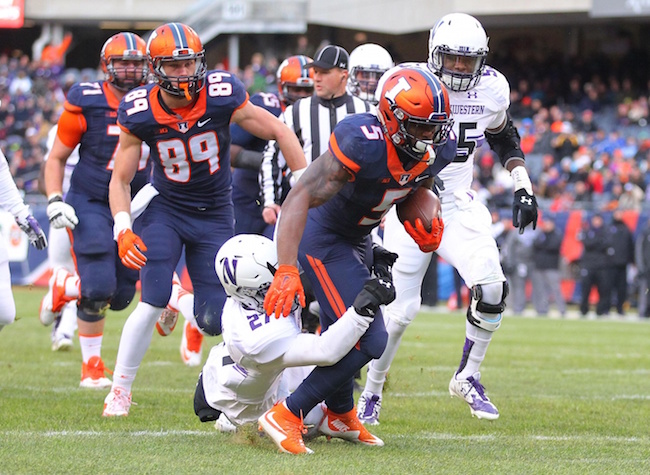 It’s funny, because Illinois actually returns seven starters on offense and they’ll have two possible first-team All-B1G defenders in Dawuane Smoot and Hardy Nickerson. But Illinois will lack depth in Lovie Smith’s first season. The Illini could’ve lost even more via transfer had Josh Whitman not made a splashy hire at head coach. Still, there isn’t much room for error in Champaign in 2016.

-Steele: Only one B1G team will make the CFP, and only one will play in New Year’s Six

Steele’s College Football Playoff has the B1G and Pac-12 missing out while the SEC has two teams (Alabama and LSU). On top of that, he only has one B1G team (Ohio State) in a New Year’s Six Bowl. Compare that to three last year. Surprising was his omission of Michigan, which has experience and a favorable schedule to at least make a New Year’s Six game. And even though Iowa was his No. 3 surprise team, he didn’t have the Hawkeyes earning their second straight New Year’s Six game. Representing the B1G in the Rose Bowl against Washington was Ohio State, which has been to a BCS/New Year’s Six game every year that the Buckeyes have been eligible in the Urban Meyer era. But the Buckeyes are the least experienced team in the country. Steele might have some friends in Columbus, but not in the rest of the B1G.

-Steele: The B1G is the weakest Power Five conference

The last two B1G nuggets worth mentioning are one of the same. Steele has a bunch of different rankings that he uses to come up with conference strength, so he isn’t exactly picking names out of a hat, but it’s still a surprise. The B1G finished second in 2015 with his crazy algorithm. But at the same time, he also predicted that cellar dwellers Maryland, Purdue and Rutgers will all make improvements in 2016. So what gives? Steele obviously isn’t sold on Michigan as a title contender, the lack of experience prevents Michigan State and Ohio State from getting back to the College Football Playoff, and he doesn’t think Iowa will be as good as its record might indicate.

But hey, the B1G proved people wrong before (don’t forget that no other conference had four teams in the top 12 in the final Associated Press poll). Why can’t it happen again in 2016?