Immediately after hearing about Christian McCaffrey’s decision to skip the Sun Bowl, I wondered about the possibility.

It’s not a crazy thought. We’re talking about amateur athletes — technically — sitting out an exhibition game in order not to risk millions of dollars. To question a guy’s commitment after 672 touches from scrimmage the last two years would be silly.

There are others in McCaffrey’s position. Leonard Fournette did the same thing last week. More will do the same. In the right circumstance, it makes sense. Notre Dame linebacker Jaylon Smith lost out on over $20 million because of his Fiesta Bowl injury against Ohio State last year.

These three B1G players are in the right circumstances (only non-New Year’s Six bowl players eligible) to skip out on the postseason if they so choose…even though they won’t.

Desmond King, Iowa CB — For the record, the chances of King skipping the Outback Bowl are slim to none. Keep in mind that this was the guy many thought was a first-round pick last year and he came back to graduate and end his career the right way. So breathe easy, Iowa fans.

But if King wasn’t wired that way, there’d be no faulting him if he wanted to take a pass on the Outback Bowl.

The guy has given everything and more to the Hawkeyes since coming to Iowa City. The two-time All-American is the main reason Iowa is 20-6 the last two seasons. To question his commitment to the program would be silly.

King, if healthy, is projected as a top-two round pick. Pro Football Focus actually has him going off the board in the middle of the first round. Is his stock changing with a few nice plays in the Outback Bowl? Probably not. And if it is, his benefit is significantly less than the drop he’d have if he suffered a major injury.

King’s résumé is locked in, and while the Outback Bowl is still important, it isn’t a New Year’s Six bowl. He already passed on millions for Iowa once. You shouldn’t hate the guy if he went a different route this time. 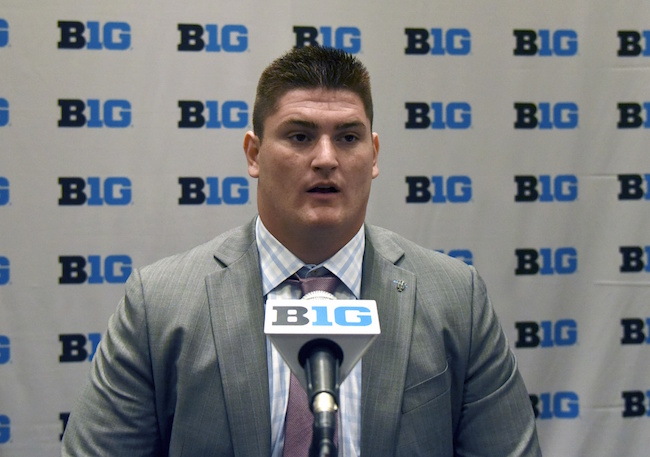 Dan Feeney, Indiana OL — This entire conversation started because of the injury risk of playing in a bowl game. Feeney missed four games because of an early-season concussion against Ball State. It was severe enough to sideline Feeney for a month, which means that another concussion would put his health in question.

Like King, Feeney easily could’ve left school for NFL riches after an All-American junior season. But he didn’t. Even though he only played in eight games, he’s still the top-rated guard in the 2017 class (nfldraftscout.com). There’s enough film on Feeney for scouts to know that they’re looking at one of the top offensive linemen in the draft.

The bowl game matters to Indiana. When you haven’t won one in 25 years, they all matter. But let’s not pretend like Feeney would be selfish by not risking millions to help win the Foster Farms Bowl.

Again, all signs point to him playing and laying it all on the line, but he’d have every right to sit.

Nathan Gerry, Nebraska S — Gerry is one of the last people you’d expect to skip a bowl game. The senior captain is a team-first guy who has been the heart and soul of that defense for four years.

Still, he wouldn’t be foolish to skip the Music City Bowl.

The four-year starter will jump out on the film when front offices watch the variety of things he can do from the strong safety position. He didn’t always play for a great defense, but his efforts won’t be lost when he’s evaluated individually. That could make him a potential Day 2 pick.

On the flip side, the margin for error is slim among middle-round prospects like Gerry. He also isn’t moving to the first round with a couple interceptions in the Music City Bowl. A major injury this close to the evaluation period plummets his stock. The way Gerry plays the game, he’s at greater risk for injury than nearly everyone he takes the field with.

Fortunately for Nebraska fans, Gerry won’t skip the Music City Bowl even though it can probably do him more harm than good.