Two B1G teams in the College Football Playoff? Here's how it happens

For as crazy as the weekend in college football was, Tuesday night’s College Football rankings likely wasn’t going to change a ton for the B1G.

Michigan and Wisconsin both stayed in their same spots despite their drastically different results. Penn State’s No. 8-ranking was about as good as it could’ve asked for.

But what really told the tale was that Ohio State moved up to No. 2. Even though that might’ve been expected, it still said a lot about how much the committee values strength of wins, which OSU has in spades.

OSU has the murkiest path to the B1G Championship. That was thanks to Michigan falling at the hands of Iowa on Saturday night. If the B1G is going to get a second team into the playoff, it’ll be OSU. There are some wild scenarios one could draw up that would result in two non-OSU B1G teams getting in, but they aren’t worth sifting through.

If you focus on the realistic scenarios that can play out, many of them favor the B1G. Forget about having one team in the playoff. The B1G is setting itself up to become the first conference to put two teams into the field.

What a time to be alive. 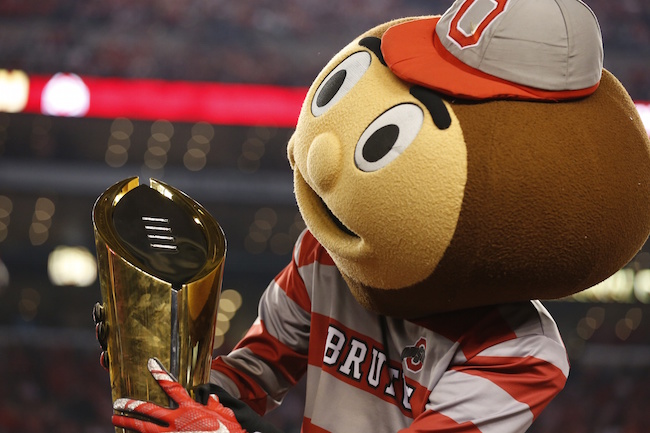 For the record, there are some legitimate scenarios in which only one B1G team gets into the field. Some of them are more straightforward than others. For the record, all of this is assuming that Alabama is already in the field. Let’s be honest. The Tide have a loss to give, and frankly, it doesn’t look like it’ll be giving it anytime soon.

The Wolverines would eliminate two-loss, non-conference champs Ohio State and Penn State, as well as a three-loss Wisconsin team with that path. It’s pretty cut and dry. If the Wolverines make the field, they likely won’t be taking a B1G team with them. It’s that simple.

Again, this is based on the belief that a two-loss, non-conference champ isn’t making the field. Michigan beating OSU and falling in the B1G Championship would essentially create that scenario for the B1G East. Wisconsin, even though it lost the head-to-head battle with OSU, might have the bigger tiebreaker with a conference title. The Badgers would also have a neutral site win vs. the Michigan team that OSU couldn’t beat on its home field a week earlier. Unless there was absolute chaos (non Clemson/Louisville ACC champ + Washington loses again), it’s hard to see any B1G team other than the Badgers making the field in that scenario.

Ok, that’s a lot to process. Here’s why it would be bad for the B1G. Wisconsin only plays Penn State if it wins out and Ohio State beats Michigan. So you would have a one-loss Ohio State team that beat a two-loss Wisconsin team in Madison. The Buckeyes, based on their current ranking and an additional win vs. Michigan, would likely get that bid ahead of B1G champ Wisconsin. If they didn’t and the committee decided that conference titles were more important, than the Badgers, Washington, a Clemson/Louisville ACC champ and Alabama are getting in.

What the committee did by ranking Washington No. 6 and Wisconsin No. 7 was say that if both win out, the Huskies are still in better position as a one-loss team. Wisconsin can only make that leap ahead of a Washington if it completely pounds PSU in Indy. Then, as we found out in 2014, it gets interesting. 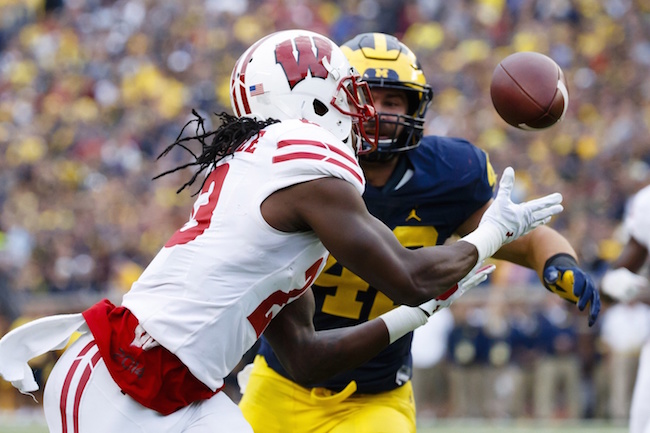 Now, there are always other things that can happen that can ruin these scenarios. If Michigan State beats either Ohio State or Penn State in the next two weeks, the two-team argument would all but end. That’s what throws everything off track. Wisconsin isn’t getting into the field with three losses, and if MSU pulls off an upset, only one B1G East team will have a chance to make the field.

But here’s how multiple B1G teams make the final four.

Believe it or not, this isn’t that crazy. Crazy would be if a two-loss Penn State team that won the B1G East and beat Wisconsin was left out of the field. Even if Clemson/Louisville won out and Washington won out, the Lions would be in better position than the Huskies to get the bid. Why? They would have outlasted Michigan and Ohio State and taken down top-10 Wisconsin in the title game. Based on how strongly the committee feels about the B1G  — four B1G teams in the top eight is no coincidence — PSU isn’t getting left out. And unlike Wisconsin if it beat PSU in the title game, it would have a win vs. either Michigan or Ohio State.

RELATED: What the ESPN panelists had to say about the College Football Playoff rankings

One-loss OSU would have wins vs. potentially three top-10 teams (Michigan, Oklahoma, Wisconsin) and four top-15 teams if Nebraska won out. The Buckeyes are No. 2 right now. TCU dropped from No. 3 to No. 6 without a conference title game in 2014 because it had ZERO wins vs. teams in the then-current top 10. OSU’s 2016 résumé is far better and far more likely to hold true through conference championship week.

This scenario would eliminate the ACC from the playoff. With two ACC teams in the top five, that seems far-fetched right now. Louisville’s awful strength of wins (zero vs. current top 15) and it’s losing tiebreaker with Clemson would be it for the Cardinals. Based on Clemson’s No. 5-ranking, it doesn’t have any more wiggle room because of the fact that it lost at home to an unranked team. Both of those teams losing is unlikely, but it would open the possibility for a field of Alabama, Ohio State, Washington and Wisconsin. 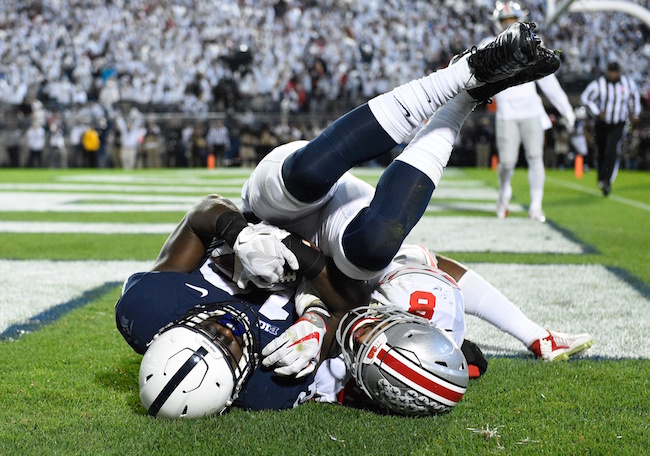 Everyone wants to know about teams like Oklahoma, West Virginia and Colorado. Do they have an outside chance of sneaking in and stealing a second bid from the B1G?

Well, a two-loss Oklahoma team isn’t stealing a bid from Ohio State after it was crushed by the Buckeyes at home. Jumping a two-loss Wisconsin or a two-loss Penn State team (either would be a conference champ) doesn’t seem likely given the current rankings.

Colorado, as a two-loss team, wouldn’t jump fellow two-loss team Wisconsin considering the Buffs were beat by three scores at Michigan. Even if the Buffs won out and beat Washington for a Pac-12 title — that would mean beating three ranked Pac-12 teams — they’d still be a two-loss team trying to steal a bid from a two-loss B1G champ. Wisconsin or Penn State would have the edge.

And what about one-loss West Virginia? The Mountaineers are sitting at No. 14 for a reason. One more win vs. a top-10 team (Oklahoma) wouldn’t suddenly vault them ahead of a two-loss B1G champ.

The reality is that B1G is in a power position. As we saw last weekend, crazy stuff can happen. But after all of that craziness, the B1G still was sitting there with four teams alive for a playoff spot. In all likelihood, November craziness is far from over. Who knows how these last few weeks will play out?

All we know is that with two regular season weeks left, the B1G is in better shape than anyone could’ve ever imagined.

How’s that for November craziness?