It’s always a good game when the Old Oaken Bucket is on the line!

The annual rivalry between Purdue and Indiana admittedly looks a bit different this season. Bowl eligibility is not on the line for either team with Indiana already eligible with seven wins. Unfortunately for the Boilermakers, they are unable to get to eligibility at 4-7.

Though it has been a rough year, Jeff Brohm and Purdue should be commended for the fight and grit they have shown this season. Missing a starting QB, superstar WR Rondale Moore, and a great defender in Markus Bailey, the odds have been against them for much of the year. The Boilermakers will once again be an underdog to finish the year.

For Tom Allen and the Hoosiers, they have put up a brilliant campaign and are out for a bit of revenge. Allen is currently 0-2 against Purdue and would love to make up for those first two seasons this year.

Heading into the contest, Indiana is a 6.5-point road favorite heading into West Lafayette. However, the computer prediction put out by Odds Shark doesn’t see a close game.

That prediction is expecting the Hoosiers to win in blowout fashion, 36.3-16.7: 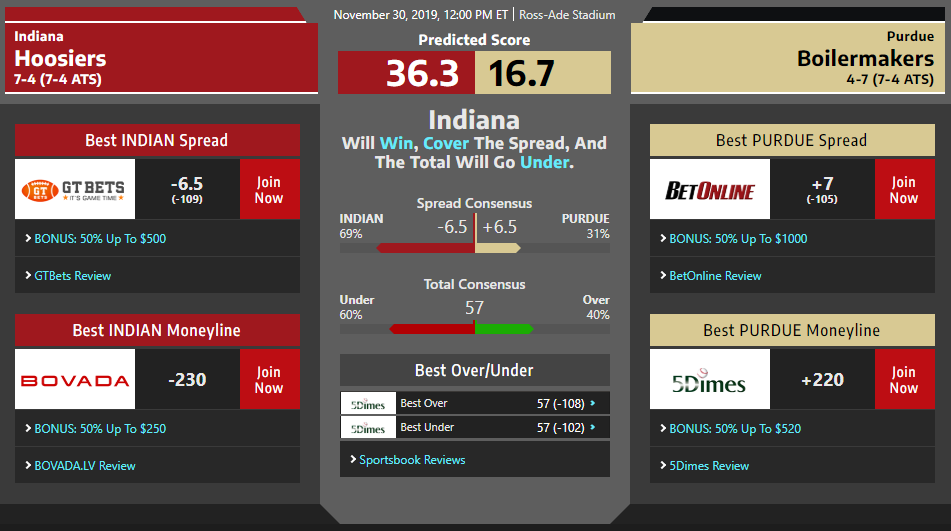 Can Indiana roll to its first win against Purdue under Allen, or will the Boilermakers turn the odds one more time in 2019? Saturday’s kickoff is set for 12 pm EST on ESPN2.