If you looked around the B1G on Saturday, you saw a few things. You probably saw overcast skies, temperatures in the 30s and maybe even some snowflakes.

As is customary in mid-November B1G games, the tailbacks were the stars on Saturday. They dominated this week’s game balls:

De’Veon Smith, Michigan RB — The Wolverines were staring at a second-half deficit at home against Indiana with a backup quarterback. It could’ve gotten scary in Ann Arbor. It did, but that was because Smith was scary good in the second half. The senior finished the day with a career-high 158 rushing yards and two scores. You couldn’t have drawn up better conditions for Smith to dominate.

Ryan Glasgow, Michigan DT — Speaking of Michigan seniors having career days, Glasgow was a force. He finished the day with three tackles for loss, a sack and a forced fumble. The Indiana offense didn’t have a second-half touchdown and was held to just 1.8 yards per carry. Glasgow wouldn’t mind repeating that effort next week.

L.J. Scott, Michigan State RB — The kid that Urban Meyer wanted but didn’t get almost ended Ohio State’s playoff bid. Scott ripped off big play after big play against that vaunted OSU defense. The sophomore finished with 236 yards from scrimmage and two touchdowns in a losing effort. Without Scott, MSU wouldn’t have been anywhere near the Buckeyes. 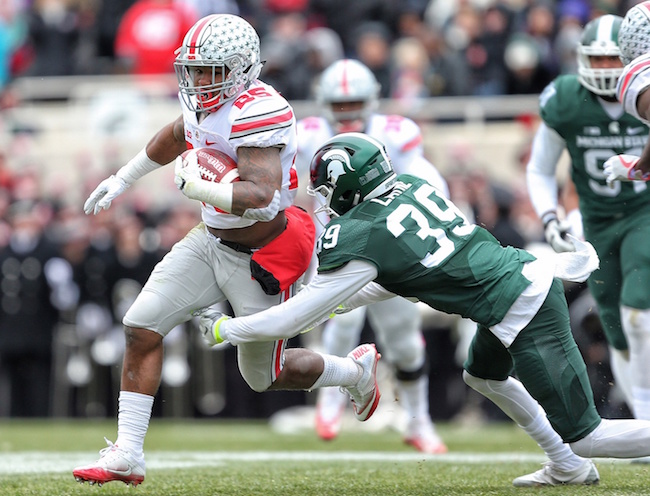 Mike Weber, Ohio State RB — I know, the fumble was bad. It was a freshman mistake. But you know what wasn’t? Weber gashing the Spartans for 111 yards and a touchdown and becoming the third Ohio State freshman ever to run for 1,000 yards.

T.J. Watt, Wisconsin LB — Watt did something his brother never did at Wisconsin. That is, return an interception for a touchdown. He’s always going to be compared to his brother, but plays like these are helping him make a name for himself.

DeAngelo Yancey, Purdue WR — The Boilermakers didn’t have a great offensive day, but Yancey was once again impressive. The senior finished with 155 yards receiving and two scores, one of which was from 75 yards out. Want an absurd stat? Yancey has a catch of 50-plus yards in five of his last six games. That’s next-level stuff.

LeShun Daniels, Iowa RB — Last week, Michigan didn’t have an answer for Akrum Wadley. This week, Illinois didn’t have an answer for Daniels. With the Iowa passing game stuck in neutral on a cold day, Daniels bruised the Illini for 159 yards rushing and two touchdowns in a 28-0 win. He had a nice day, but Kirk Ferentz probably benefitted the most from the Hawkeyes’ seventh victory.

Desmond King, Iowa CB — Believe it or not, that was only King’s second interception of the year. After leading Power Five defenders in picks in 2015, King simply hasn’t been targeted as much this year. But he made a spectacular play on the ball and earned his second takeaway of the year. He also helped stymie Illinois’ passing game and lock down a shutout victory.

Ryker Fyfe, Nebraska QB — Wait, is that Tommy Armstrong Jr.? No, but Fyfe could move a little, too. Filling in four Armstrong, Fyfe made some nice throws facing Maryland pressure. He picked up his first career win after completing 23 of 37 passes for 220 yards and a score. And unlike his first start against Purdue in 2015, he didn’t throw four interceptions. It was a much better effort for the Grand Island, Neb. native.

Terrell Newby, Nebraska RB — Without Armstrong, Newby had to carry the load in the ground game. That he did. The senior finished with a career-high three touchdowns in a rare comfortable win for Nebraska. That was also his first rushing score in over a month. It came at a good time.

Blake Cashman, Minnesota LB — On a day that was supposed to be about seniors, a sophomore stole the show. Cashman stepped up and had a forced fumble and a career-high 10 tackles, two of which were sacks. Minnesota finished with a season-high seven sacks against a Northwestern offense that’s had plenty of success in 2016.

Brandon Bell, Penn State LB — Bell helped Penn State join the club of B1G East teams to shut out Rutgers. He did so by recording a sack and finishing with a team-high five tackles. Fortunately, Bell and the Lions defense didn’t need to be on the field very much on Saturday night. If people are trying to figure out what’s different between Penn State now compared to two months ago, look no further than Bell’s presence. Can he lead the Lions to a couple more wins?