The games might be easier in non-conference play, but the grades are harder to decide.

If a team wins a game by 20 that it was supposed to win by 30, does that make it a letdown? Or why does a team that loses facing a quality opponent get a better grade than a team that won by 40?

Those answers are in the eye of the beholder. In this case, that’s a guy who spent 9 a.m. to midnight consuming all things B1G football.

So here are the marks that each B1G team earned in Week 2:

On the bright side, Illinois ran the ball well. Five yards per carry against UNC is the tone Lovie Smith wants to set in the B1G play. But 3.5 yards per pass isn’t going to stretch the field. It would’ve been a monumental win for Lovie Smith with a sellout crowd on hand. Instead, it’s a little early reality check.

Indiana did snap its losing streak to Ball State — IU should never lose to Ball State — but the offense is still a work in progress. Losing Simmie Cobbs and Dan Feeney certainly hurt. It’s worth noting that the IU defense didn’t allow a touchdown until the 57th minute. That’s rare, even against teams like Ball State.

Complete and total domination. CJ Beathard played arguably the most impressive game of his career, Iowa’s tailbacks ran like grown men, and the defensed harassed both Iowa State quarterbacks. That was everything Kirk Ferentz could’ve asked for. Iowa certainly looks the part of a top-15 team early this season.

Speaking of complete domination, that was pretty impressive stuff from the Terps on Friday night. On the road, Walt Bell’s offense was in mid-season mode. Perry Hills looked as good as ever, as did D.J. Moore. If there’s one knock, it was that the Terps allowed five yards per carry to an offense that became one dimensional once Alex McGough went down. That won’t be lost on DJ Durkin. 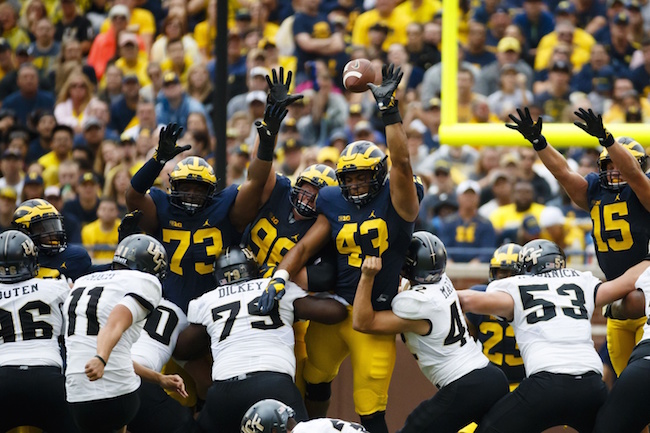 Does that seem harsh? That’s how top-five teams get graded. Top-five teams don’t get out-rushed 275-119 by a team like UCF, either. But the Wolverines took over with the passing game and outside of a few long runs, the defense showed why it’s one of the top units in the country. There’s definitely room to improve before conference play starts.

A 58-point effort was exactly what Minnesota needed to do against a weak FCS foe. The Gophers delivered their best offensive output in a decade and that was thanks to Mitch Leidner and Drew Wolitarsky. If there’s one complaint, it was that the Gophers’ usually-stout secondary let up four passing touchdowns to an FCS team. That doesn’t happen often.

It was obvious that Wyoming was going to come into Lincoln with a chip on its shoulder. To the Cowboys’ credit, they were within a touchdown of the Huskers near the end of the third quarter. But the wheels fell off after Kieron Williams’ pick-six. Tommy Armstrong delivered one of the better passing performances of his career. And fittingly, he became the school’s all-time leading passer. Not a bad day’s work.

You can’t lose to an FCS school at home. You just can’t. 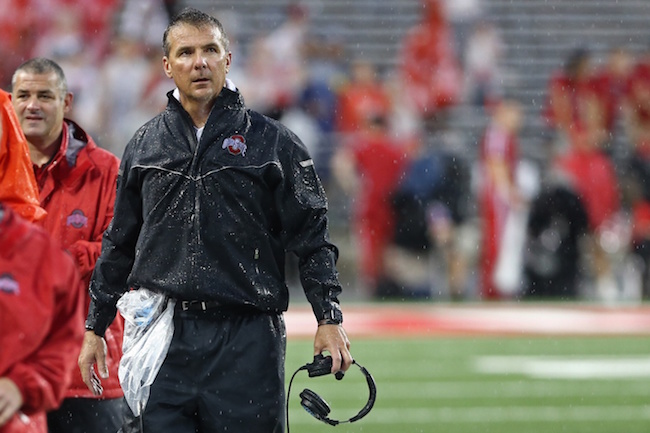 It’s hard not to be impressed with the Buckeyes’ secondary. Four more interceptions bumped the season total to seven, which is tied with Nebraska and Cincinnati for the best in FBS. Once the rain came down, the Buckeyes pinned their ears back and made life difficult for Tulsa. JT Barrett and the passing struggled before the weather became a factor, though. That’ll have to be taken care of before Oklahoma.

The Lions had every excuse to throw in the towel. Down three scores, Penn State was being embarrassed by rival — yes, rival — Pitt. Credit the Lions for mustering some stops on defense and capitalizing on some prime field position. Somehow, the Lions were a dropped pass from winning that game. It doesn’t erase Pitt’s early dominance, but in the fourth quarter, PSU played with more fight than it ever has in the Franklin era.

Let’s start with the good because there wasn’t much of it. David Blough did throw for 400-plus yards. After two games, Purdue actually leads the B1G in passing yards. But……..Blough also threw five picks, each one more painful than the last. That killed far too many drives. And Markell Jones left the game with an injury. Purdue’s defense is still a mess. The Bearcats racked up over 500 yards of offense, and Purdue never got within one score after the mid-way point of the second quarter. Darrell Hazell can’t afford many more fourth quarters in an empty Ross-Ade Stadium.

I feel like I’m going to say this often this year, but where would the Scarlet Knights be without Janarion Grant? I already wrote about his dynamic effort, which was needed after a slow start against lowly Howard. Being down 14-0 to a team like Howard can’t happen. It’s never good when the national media starts talking about a score like that.

Impossible to overstate how bad the first quarter was for Rutgers. Trails Howard — Howard! — 14-7 and outgained 159-15. Pitiful.

Howard and Rutgers tied at 14 late in the first half

For a team set on rebuilding its culture, Chris Ash can’t have that. Fortunately, the Knights hung 52 unanswered points on Howard to avoid embarrassment.

The Badgers were prime candidates to start slow riding the high of last week’s LSU win. They definitely avoided that. Nearly 600 yards of offense was exactly what Paul Chryst wanted to see from his group against a weak Akron team. Bart Houston looked solid, the ground game found its groove and the Badger wideouts did their part. Alex Hornibrook even came in and was a perfect 5-for-5. And as usual, the Wisconsin defense didn’t allow much of anything. It was the perfect post-LSU response.