It could’ve been an embarrassing week for the B1G. If you could’ve stopped after the noon games, you would’ve assumed it was a Saturday to forget.

But Michigan State, Nebraska and Ohio State all turned it around, and earned high marks in the process.

Here are the B1G grades for Week 3:

Western Michigan is no joke, but losing to a MAC school by 24 points is unacceptable. PJ Fleck is one of the early candidates for B1G Coach of the Year after taking down Illinois and Northwestern. Maybe Western Michigan should be “Chicago’s Team.”

The Hawkeyes earned the worst grade of the week not because of the simple fact that they lost to an FCS school. It was the way that it happened. There’s no reason Iowa should EVER get out-rushed 239-34 to an FCS school. I don’t care how many national titles they’ve won. That’s the foundation for Kirk Ferentz’s program. Clearly, there are some leaks in it. Side note: How bad is Iowa State?

Before Tyrrell Pigrome’s dramatic walk-off touchdown, Maryland went back-and-forth on the road against an improving UCF squad. But the Knights were starting a true freshman quarterback, and he threw for 260 yards and a couple scores. Why did the Terps win? Well, they won the turnover battle 4-0. My how things have changed. 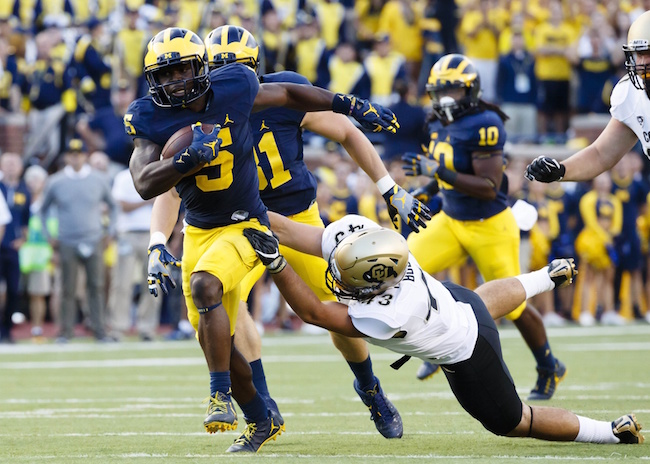 Colorado was certainly a little bit better than some might’ve realized (me). But Michigan was getting manhandled defensively in the first 25 minutes. If not for some putrid special teams play and the do-it-all-man Jabrill Peppers — he’s incredible, by the way — it could’ve been a much more nerve-racking finish. On the bright side, De’Veon Smith looked like he was in mid-season form. The Wolverines need him to have more games like he did Saturday.

Wow, so that’s how good Michigan State is? Watch out, B1G. Tyler O’Connor was poised, the MSU ground game was dominant and the Spartan pass-rush was solid. To jump out to a 36-7 lead in South Bend is unheard of. If not for allowing three straight scores late, MSU would’ve been at a solid ‘A’ for the impressive road win. Still, the Spartans showed that they aren’t in rebuilding mode at all.

Finally, the Huskers made the winning plays down the stretch and beat a good team. Tommy Armstrong came through in the clutch and the Blackshirts didn’t wilt as they’ve done so often in late-game situations under Mike Riley. Credit Nebraska for not letting Oregon become another game that got away. If there’s a knock, it’s that Oregon still ran for seven yards per carry without Royce Freeman for most of the afternoon. But Nebraska will gladly take that with a monumental win.

Hey, the Cats are on the board! Go figure that it took Northwestern’s first Power Five matchup to yield a victory. Clayton Thorson made mistakes, but at least he moved the offense and took advantage of a young Duke defense. He and Austin Carr appear to have a nice connection going, which is beyond important heading into B1G play. If the Wildcats started off 0-3, it would’ve been disastrous for what’s already the B1G’s smallest fan base. 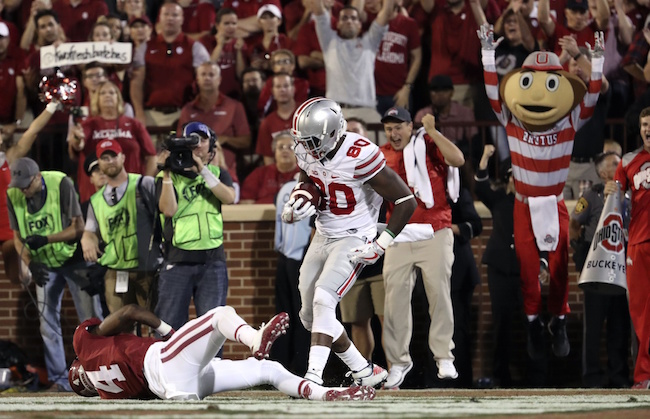 I don’t know how many teams in America could go into Norman and completely take over like that. Alabama and Ohio State might be the only ones. That was as impressive of a road performance as we’ve seen from a B1G team in a long time. Noah Brown and Curtis Samuel played like All-Americans, the defense dismantled one of the nation’s most prolific offenses and OSU’s underclassmen played like poised veterans. Any questions about Ohio State’s inexperience are gone after that showing.

On one hand, it was a one-possession victory against a team Penn State should’ve beat by three touchdowns. On the other, PSU was completely decimated on defense and completely stuffed Temple’s run game. On top of that, Saquon Barkley was out for the majority of the game. That was not a game Penn State needed style points. It just needed a win.

And yeah, Barkley is fine:

I’m a little torn on this one because falling behind 21-0 to a Mountain West team at home is bad. Those slow starts have to end in B1G play. But I was impressed with the defensive adjustments Chris Ash made. Robert Martin and Janarion Grant’s long touchdowns erased the need for Chris Laviano to engineer a bunch of scoring drives. The more of that, the merrier.

Yuck, yuck, yuck. Those aren’t laughing yucks. Those are “ew, gross” yucks. Wisconsin barely got by its easiest game on the schedule. The Badgers were awful in the red zone, they lost the turnover battle 2-0 and they allowed 269 passing yards. All around, it was a horrific effort after such a promising start. With or without Corey Clement, that shouldn’t happen. That kind of effort won’t fly in any one of Wisconsin’s first five games to start B1G play.