You can’t lose as a double-digit favorite at home to arguably the worst Power Five team in the country. It didn’t matter that Illinois lost Wes Lunt. Purdue, which totaled 10 rushing yards last week against Maryland, ran all over the Illini with its third and fourth-string tailbacks. Chayce Crouch and the Illini running game got it going, but it was still a home loss to a team that had two B1G wins since the start of 2013.

The Hoosiers played the No. 2 team in the country competitively on the road. IU deserves credit for completely eliminating the OSU passing game (9-for-21, 93 yards) and making a dynamic OSU offense one-dimensional. If the Hoosiers allowed less than six yards per carry, the IU offense could’ve gotten into a better rhythm and built off some of its first-half momentum. It’s a three-touchdown loss, but scoring two offensive touchdowns and containing that passing game was no small task. 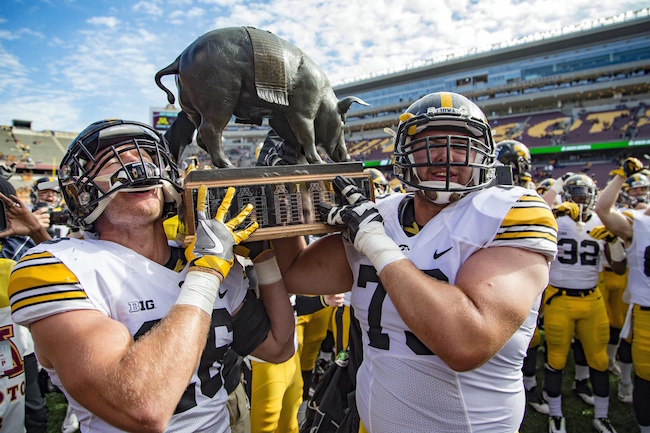 For once, Iowa got a timely score. Akrum Wadley saved the day for the Hawkeyes on the road and got the them out of Minnesota with some bacon. Offensively, Iowa deserved a ‘D’ for that effort. But credit the Hawkeye defense for stopping a potent Minnesota ground game and forcing Mitch Leidner to go to the air. That didn’t work out so well. Wins aren’t easy to come by for Iowa these days, but that was a gritty road victory.

The Terps were actually favored on Saturday. Some of us — myself — even predicted Maryland to pull out a win. After a nice early start, that went out the window. Part of that was because Perry Hills went down and Tyrrell Pigrome had to play from behind. That’s not what Maryland wants to do. More concerning for DJ Durkin was the fact that his defense was trampled for 372 rushing yards against the B1G’s last-ranked rushing attack. Fortunately, they won’t see Saquon Barkley every week.

That was a conference game? Are you sure Michigan wasn’t playing some New Jersey high school team?

Just when you thought Michigan State couldn’t look any worse, Saturday happened. A complete collapse yet again dropped the once-proud Spartans to a new low. MSU was out-rushed 260-85 on its home field to a 2-3 BYU team. The defense allowed a whopping 24 first downs and MSU was out-gained 398-206. Just a complete and total failure, it was.

Minnesota fans might feel a ‘C’ was too generous given how much Mitch Leidner struggled. But the Gopher defense went 55 minutes without allowing a touchdown. Minnesota held an All-B1G quarterback to under 200 yards and forced two interceptions. If not for that Wadley run, the Gophers are holding Floyd with a fighting chance in the B1G West. Unfortunately, the offense couldn’t pull its weight. 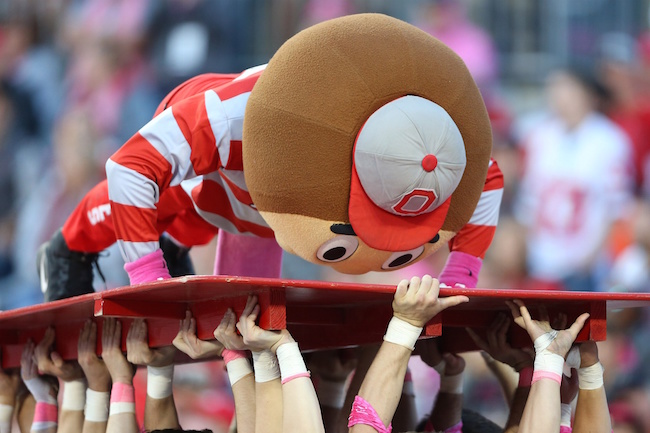 Urban Meyer made sure his team wasn’t underestimating Indiana. That might not have been the case, but the Buckeyes still struggled to get distance against the pesky Hoosiers for most of the afternoon. It was the first time that Ohio State was pushed a little bit. The passing game struggled mightily and the defense looked somewhat human. It was still impressive to hold that rushing attack under 100 yards and to rack up nearly 300 yards on the ground. Sometimes, you have to win ugly.

The best game PSU played all year. Period. The Lions finally came out ready to go with a perfect opening drive that set the tone for a dominant rushing day. Saquon Barkley and Trace McSorley were way too much for Maryland and the PSU defense got tough after getting gashed for a long Ty Johnson touchdown in the first quarter. The wheels didn’t fall off when Andrew Nelson went down. The ground game just kept rolling. That was an ideal performance before a bye week and a showdown vs. Ohio State.

For the third time in the Darrell Hazell era, the Boilers celebrated a B1G victory. Even more surprising was the fact that it happened on the road. Never mind the fact that Purdue let a backup quarterback run all over the place. It was a win, and adjustments in the run game fueled it. Who would’ve thought that the Boilers — after running for 10 yards at Maryland — would rack up 231 rushing yards without Markell Jones? J.D. Dellinger even delivered the game-winner. By far, it was the most impressive effort of the season for Purdue.

Does Rutgers have a first down yet?