At the midway point of the season, we have a better feel for expectations for each B1G team.

Meaning that when Ohio State wins at Wisconsin, we know how impressive that is. Or when Nebraska grinds out a victory at Indiana, we no it’s a solid road win.

Expectations are taken into account. Grades are all about whether or not a team performed up to or below expectations. It’s more than if they covered the spread or if they put up a certain amount of points.

So with that, here are the Week 7 grades:

Beating Rutgers isn’t exactly the world’s greatest accomplishment these days, but it’s still a conference win. Lovie Smith didn’t have one of those before Saturday. He joined the B1G win club thanks to a monster day from Kendrick Foster. Without Wes Lunt, Illinois found ways to score and snapped a four-game skid.

My how expectations have changed in Bloomington. In the past, narrowly beating a top-10 team would’ve warranted at least an A-. But Indiana still left too many points on the board. The Hoosiers didn’t get their first offensive touchdown until the final play of the third quarter. This team isn’t sustaining drives like it usually does under Kevin Wilson. Go figure that the defense looks like the superior unit. 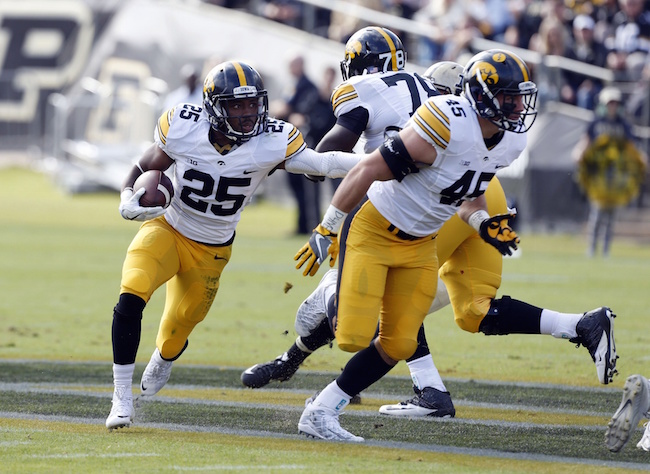 Since you started reading this sentence, Iowa ran for another touchdown. You know it’s ugly when two guys crack the 150-yard mark. So why not an ‘A’? Allowing 504 yards to Purdue isn’t good. The Boilers made that game closer than it actually was. Still, Iowa embarrassed Purdue enough for Darrell Hazell to lose his job.

It’s always difficult to grade a team without it’s starting quarterback. The entire offense changes. That was the case for the Terps. It wasn’t an overhaul of Walt Bell’s system, but Tyrrell Pigrome operated differently in it. And unfortunately for the Terps, the offense was shaky all day. Minnesota also established the run against a Maryland defense that’s not looking as solid as it once did.

How bad was Saturday for MSU? That was the most points the Spartans allowed at home. Ever. It was MSU’s most points allowed in a game in 13 years. And it was against Northwestern. You know, that team that scored seven points at home against an FCS team a month ago. The Spartans can’t generate any pressure and they can’t cover anybody. Believe it or not, that’s a bad combination. 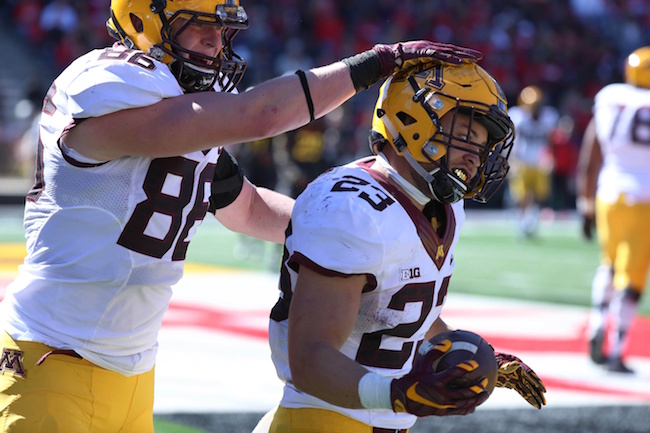 Early, the Huskers looked like they were going to run away with one in Bloomington. That was a stellar effort from the Blackshirts against an offense that can score in a hurry. Holding that group without a touchdown for 45 minutes in their building was impressive. But the Nebraska offense sputtered. Tommy Armstrong wasn’t right, but that still doesn’t excuse some of the back-footed throws he tried to make. If Armstrong is unable to go or hampered this week, he can’t afford to revert to his old ways. Having said that, that it was still a nice road win against a quality opponent.

Who woke up this offense? The Wildcats are suddenly an offensive juggernaut with their second straight game lighting up the scoreboard on the road. Clayton Thorson, Austin Carr and Justin Jackson led a 54-point effort, which was the most points ever allowed by MSU at home. The Cats got better and better as the game went on and took advantage of a disastrous MSU defense. 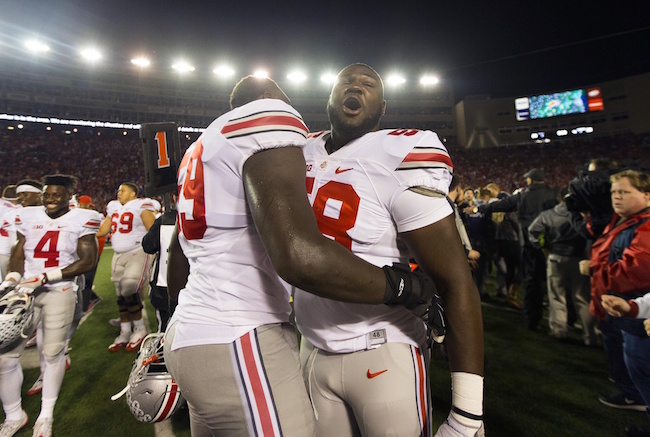 Any team that goes into Camp Randall and wins deserves an ‘A.’ Against that defense, Ohio State cranked it up a few notches in the second half and kept its undefeated season alive. And Greg Schiano deserved credit for making some big-time adjustments and shutting down the Wisconsin offense after its fast start. The Buckeyes aren’t used to coming back on teams, and in that building, that was no small task.

The Iowa ground game is one of the B1G’s best. Still, the Boilers allowed over 300 yards of rushing on first down alone. That’s awful. It proved to be the last straw for the long-expected firing of Darrell Hazell. Trailing 28 points at home to an unranked team can’t happen in the next era of Purdue football.

Rutgers scored! Rutgers scored! Unfortunately, that was the internet’s reaction when the Scarlet Knights finally pushed one across against Illinois, which snapped an 11-quarter scoring drought. Rutgers did nearly hit the 400-yard mark, so that’s something. A 17-point home loss to Illinois is still pretty deflating.

That first-half performance was as good as we’ve seen by any B1G team in 2016. The Badgers broke off big chunks of yards against a top-five defense. And once again, the Wisconsin defense was dominant. But the Badger offense went in reverse in the second half and Wisconsin was out-coached. Ohio State made the tweaks needed to pull out a hard-fought win in Madison. But if that effort against that team didn’t prove Wisconsin is top-10 worthy, I don’t know what will.