Anybody can shine in the first quarter. The performances that are remembered are by those who come up big late.

There were plenty of those efforts on Saturday. And fittingly, the most memorable came during the last game of the night.

Corey Clement, Wisconsin RB — Remember those questions about Clement’s durability? Well, throw them out the window. The Badger tailback racked up a career-high 35 carries and run for 134 yards and a touchdown in a win at Iowa. Sure, he fumbled on the goal line, but Clement made up for it with a 37-yard run on a key third-and-one in the fourth quarter. He’s well on his way to an All-B1G year.

Garret Dooley, Wisconsin LB — If I had a nickel for every Wisconsin linebacker I gave a game ball to, I’d have some serious pocket change. Dooley was just the latest Badger linebacker to step up. He racked up 2.5 tackles for loss and came up big on a day on which T.J. Watt, Jack Cichy and Vince Biegel were all working through various injuries.

Hendrick Ekpe, Minnesota DE — The Gopher defense wasn’t great against Rutgers, but Ekpe was. He had three tackles for loss, two of which were sacks. Ekpe’s pressure was big on a day in which Minnesota lacked several key defensive stoppers. 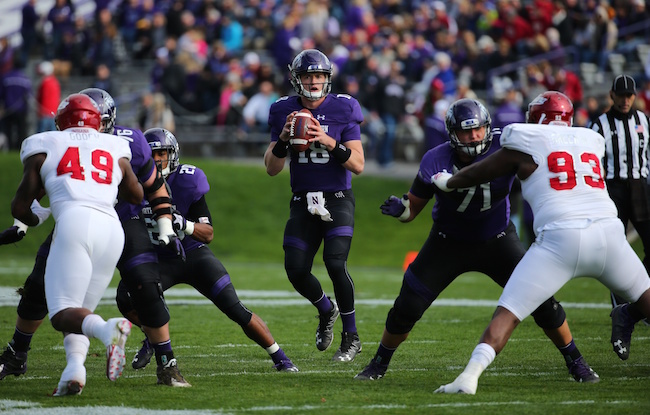 Clayton Thorson, Northwestern QB — Wow, is this kid turning into a player. Thorson diced up a solid Indiana secondary and delivered one of his best games to date. He racked up a career-high three touchdown passes, one of which was to Austin Carr, of course. The Wildcats have three straight wins in which they’ve put up 38 points per contest. Thorson had three touchdown passes in all three of those games, too. That’s not a coincidence.

Kyle Queiro, Northwestern CB — Hey, Jordan Lewis. How do you like them apples?

De’Mornay Pierson-El, Nebraska WR — Man, was it good to see this guy back to full speed. It seems like Pierson-El hasn’t quite looked like himself since the end of 2014, but he did on Saturday. He zipped past the Purdue secondary for a 40-yard score and made Nebraska fans remember how electric he could be. Pierson-El had more receiving yards on Saturday (69) than he did in the previous six games combined (61). That offense has a major x-factor when he’s right.

Wilton Speight, Michigan QB — No, the Illini don’t exactly look like the Monsters of the Midway, but Speight still looked solid against a defense that’s not as bad as some say. Believe it or not, that was Speight’s first game with multiple touchdown passes since UCF. He wasn’t perfect, but Speight again showed that he’s making some necessary steps in Jim Harbaugh’s offense.

Maryland ground game — Now THAT was what the Maryland backfield looked like during the 4-0 start. The Terps ran all over Michigan State for 247 yards. Ty Johnson was special again and Lorenzo Harrison provided his first career 100-yard output and even Kenneth Goins got into the end zone. When the Terps can establish the run like they did against MSU, they’re a capable team.

Garrett Sickels, Penn State DE — Who needs to play a full game? Certainly Sickels didn’t. After serving a one-half suspension, Sickels harassed J.T. Barrett. He sacked him 2.5 times and finished with 3.5 tackles for loss. The Lions defensive line completely took over down the stretch and Sickels was the biggest reason why. Without him, Penn State doesn’t win its biggest game of the James Franklin era.

Marcus Allen/Grant Haley, Penn State — How many times do you think they’ll watch this one on replay in State College?