An ‘A’ is a sign that expectations were exceeded and the result was the best one could’ve hoped for.

In Week 8, there weren’t a ton of those.

As much as Penn State’s upset stole the show, few teams rose above expectations. Michigan, Nebraska and Wisconsin all got victories, but none of them were their best all-around games.

There were, however, a few teams that stood out:

Losing by 33 points and scoring one garbage time touchdown is usually not a passing grade. But when you’re Illinois and you only allow the No. 2 team in the country to score one touchdown in an entire half, you’ve done something right, at least on one side of the ball.

Teams struggle in those early games at Northwestern. Maybe it’s playing in front of a smaller crowd and playing on a grass field. Whatever it was, Indiana started and looked slow against the Wildcats. As a result, the fact that the Hoosiers shut out Northwestern in the second half was moot.

A ‘C’ indicates that a team met expectations. Losing to the Badgers in the fashion that they did was exactly what most expected out of the Hawkeyes. The passing game was a mess, the defense kept them close, and Wisconsin pulled out a hard-fought win. But apparently not everyone knew it was as close as it was. 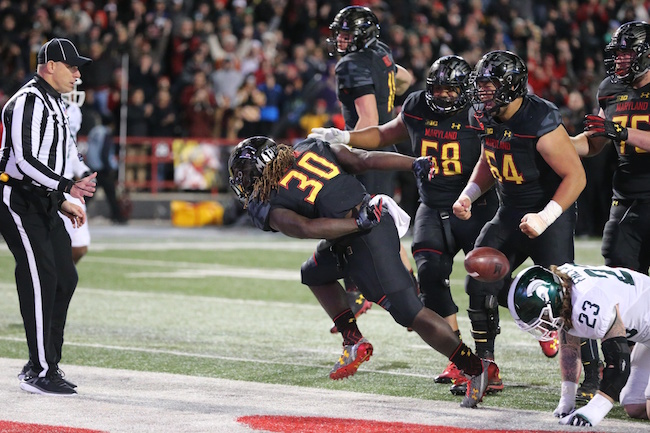 Huge, huge bounce-back effort from the Terps. Right before the recruiting cycle picked up again, the Terps took down last year’s B1G champs (it’s easy to forget that) in a prime-time game. Maryland’s offense looked much better with Perry Hills back. He played one of his best games and the Terps ground game did the rest. So why not an ‘A’? The Terps did allow 270 rushing yards to a previously non-existent Michigan State ground game. With three top-10 teams in the next four weeks, that has to be taken care of.

For the third time in as many games, the Wolverines held its opponent to single digits. That’s what the Wolverines are supposed to do against first-year starters. But Illinois made some nice halftime adjustments and the Michigan offense was held to one second-half touchdown. The Wolverines have their highest ranking in a decade, but there’s definitely room for improvement.

Yuck. That’s the only word that works for MSU these days.

The Gophers should’ve lit up Rutgers like a Christmas tree on Saturday. Instead, they needed a last-second field goal to win against arguably the worst Power-Five team in the country. The Gophers didn’t have an offensive touchdown after the first quarter. And on the flip side, the defense allowed Rutgers to rally back from an 18-point deficit. That should never happen.

I get that Nebraska is banged up right now. The Huskers weren’t going to deliver a complete rout of Purdue. But this was a prime opportunity to get some offensive mojo back and the Huskers had to grind out yet another win. Purdue let up an average of 50 points to Iowa and Maryland. The Blackshirts adjusted well after an awful first quarter, but Nebraska has some serious offensive tweaks to make. 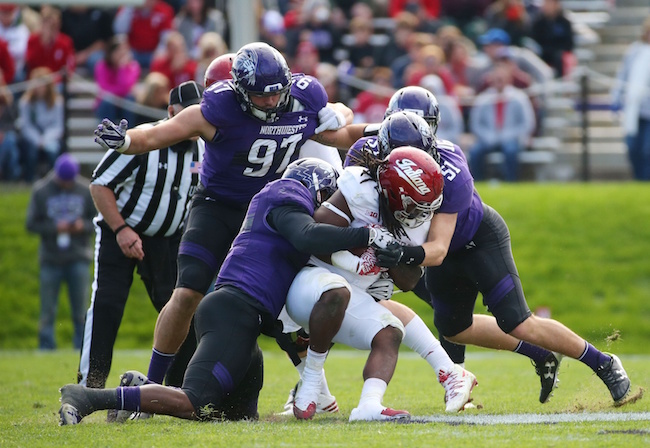 The Wildcats came out ready to roll against a solid Indiana defense. Fortunately for Northwestern, it got its points before the Hoosiers knew what hit them. Austin Carr delivered yet another standout performance and the Northwestern passing game proved again that its not the same group that scored seven points against Illinois State. And after that ugly defensive effort at MSU, the Cats held Indiana to its lowest offensive output since Oct. 10, 2015.

For the first time in a long time, the Buckeyes completely collapsed in the fourth quarter. That was Ohio State’s first loss after leading by 14 points in the fourth quarter in 78 tries. The Buckeyes fell apart on special teams and couldn’t take care of the line of scrimmage late. That’s a bad combination for trying to win on a hostile environment.

The Lions earned their best win of the post-Joe Paterno era. And go figure that PSU would beat an Urban Meyer-coached team because of special teams. That was the first time the Lions took down either Michigan, Michigan State or Ohio State since James Franklin took over. Sure, the passing game didn’t look polished, but when you beat the No. 2 in the country, it’s an A-worthy performance.

Purdue played inspired for Gerad Parker in his first game as head coach. The Boilers came out and threw the ball all over the place against an improving Nebraska defense. But a fast start was all that Purdue had. The offense couldn’t get anything going in the second half and the upset bid fell short. Still, hanging around on the road against the No. 8 team in the country isn’t easy to do.

Woah, was that the Rutgers offense I saw? I believe it was! For the first time in five weeks, the Knights scored more than a touchdown. And believe it or not, it happened against a decent B1G defense. Rutgers had double its points from the last four games combined. That’s more than a quarterback change. It was defense also held strong after an awful first quarter. Progress was made in Minneapolis.

Even with Vince Biegel and Jack Cichy less than 100 percent, the Badgers still didn’t allow a touchdown. That’s impressive. Also impressive was the durability of Corey Clement and the Badger offensive line, which didn’t lose any steam in the fourth quarter in a traditional, black-and-blue B1G game. Wisconsin’s first win in a month solidified what the standings didn’t. This team is really, really good.