At the midway point of the season, maybe we actually have this thing figured out. Crazy thought, right?

That’s not to give myself a pat on the back — though I did go 5-1 in picks — but more about the feeling surrounding the B1G.

The top three are really really good, teams 4-6 could probably beat each other in any given week, 7-11 is an inconsistent mess and 12-14 is just brutal.

So if you’re looking for a B1G shakeup, sorry:

Home against Illinois and still a 17-point loss? Rutgers might not move off that No. 14 spot all year. On the bright side, Rutgers is likely finished with ranked opponents in 2016.

Hey, Lovie Smith is on the board! Believe it or not, he and Tracy Claeys earned their first B1G road victories on the same day. Perhaps Smith’s midseason fire got the troops ready to roll for Saturday. Maybe if he goes full Mike Gundy, the Illini will stay within two touchdowns of Michigan.

A new coach but the same spot for Purdue after another horrific defensive performance. You obviously can’t win in this league if you can’t stop the run. The Boilers get a Nebraska defense averaging 220 yards per game and end the season with five of the six leading rushers in the B1G. Yikes.

Speaking of inept run defenses, Northwestern diced up the Spartans all afternoon. Only Rutgers and Purdue have allowed more touchdowns than MSU. As Mark Dantonio said, that nine-year bowl streak might’ve been taken for granted. 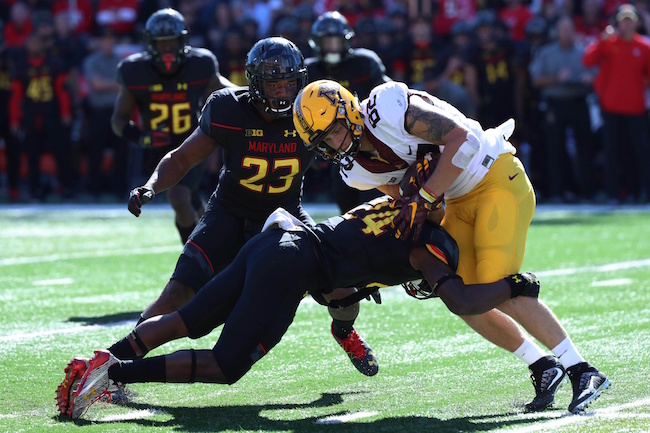 It’s hard to drop a team three spots when it loses a game without its starting quarterback. Still, it’s hard to have much faith in an offense that scored 24 points in the last two games. And that run defense that looked stout in September didn’t look very stout in consecutive weeks. The Terps need Perry Hills back and then maybe they can get back to looking more like the team that started 4-0.

Not to speculate, but 0-3 in the B1G would not have earned Tracy Claeys a contract extension. It’s easy to forget that Claeys is still trying to prove himself to a new boss. Getting back on track on the road is a good place to start. What’s up next? Rutgers, Illinois and Purdue. It would be a major letdown if Minnesota wasn’t 7-2 heading into that showdown at Nebraska.

Just like that, Iowa is 3-1 in the B1G. Sure, two of those wins came against Rutgers and Purdue, but the Hawkeyes actually still control their own destiny. We’ll see if the same thing can be said after games against Wisconsin, at Penn State and vs. Michigan. 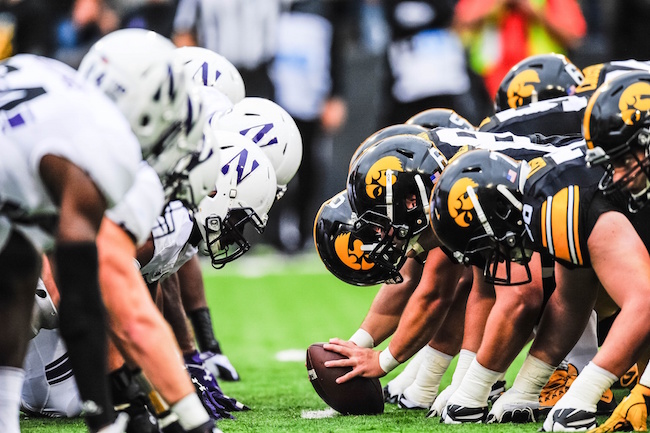 After that disastrous start, the Cats have wins in three of their last four games, with the lone loss coming to No. 8 Nebraska. Go figure. The Wildcats offense is in a major groove right now. And surprisingly, it isn’t just the running game. If this offense somehow produces with Indiana, Ohio State and Wisconsin up next, then that’d be all sorts of impressive.

There really isn’t much separation between Indiana and Nebraska. Put them on a neutral site and I believe Nebraska wins maybe six out of 10 times. The Hoosiers need their best two offensive linemen back in a hurry. Fortunately, the Hoosiers get four straight unranked foes after facing three straight ranked teams.

The Lions got two weeks to prepare for Ohio State. That’s huge for a team that was in need of a break to get healthy on the defensive side. Here’s a crazy thought: If PSU somehow pulled off a mammoth upset against Ohio State, it would be in decent shape to hit 9-10 wins. Road games at Purdue, Indiana and Rutgers are winnable, as are home games against Iowa and Michigan State. Not saying it’ll happen, but PSU’s chances at getting over the seven-win hump look much better than they did a few weeks ago.

Go figure that Nebraska is showing a lot of the same characteristics of last year’s Iowa squad. The unbeaten Huskers haven’t been dominant the way Michigan and Ohio State have been. And because Wisconsin faced four teams better than Nebraska’s toughest foe — and been competitive every time — the Badgers get the higher spot. Upcoming trips to Madison and Columbus will be true barometers for this team. 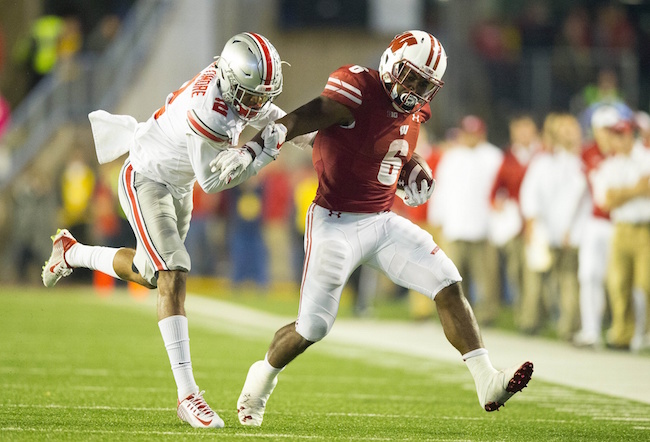 The Badgers nearly pulled off a monumental victory that would’ve given them the inside track to a playoff spot. Still, the Badgers showed what we already knew. They’re legit. That defense is going to be even more dominant against weaker offenses down the stretch. The Badgers aren’t through the gauntlet yet with a trip to Iowa and a showdown against Nebraska coming up. But it’d be surprising if the Badgers weren’t favored to win the rest of their games.

Whether Michigan was rooting for or against Ohio State on Saturday night, the top spot in the B1G was up for grabs. OSU still has it. Yes, both Michigan and OSU have been equally dominant. But OSU gets the edge because it’s more battle-tested to this point. Beating two quality top-25 teams on the road isn’t easy. Unfortunately for the Wolverines, it’s looking like they won’t get to play a top-25 team on the road until you-know-when.

The Buckeyes might already have something that they haven’t had in the first two years of the playoff system — a mulligan. Two road wins vs. top-25 teams plus dominant showings vs. unranked teams should give OSU a built-in loss. But on the other hand, what if OSU lost to Michigan and missed out on the B1G Championship? Would the Buckeyes still be in the field with one loss along with the B1G Champion? Assuming Nebraska is still in the top 25 in three weeks, OSU would have three wins vs. top-25 teams, and potentially two wins against top-10 teams. There’s still so much that can happen, but so far, you can ask for a much better scenario if you’re OSU.