But finding the right head coach has been a rough obstacle for several programs in the conference. Many have had to go through trial and error before landing the right guy. Some are still enduring that process.

There have been plenty of bad coaching hires made since the turn of the century.

What are the worst?

This wasn’t a bad hire because O’Brien was unsuccessful. O’Brien’s lack of commitment to a program needing stability landed him on this list.

O’Brien came in after Penn State was hammered with NCAA sanctions following the Jerry Sandusky scandal. The longtime assistant for the New England Patriots was never fully invested in the program, and took a job with the Houston Texans after two seasons in Happy Valley.

Player run-ins with law enforcement, academic issues and other behind-the-scenes problems led to Flood’s dismissal after a 4-8 season in 2015. It was a year many journalists in the New Jersey area coined as “the season from hell,” and was a sign that the head coach had lost control of his program.

On the field, Flood was an average coach who struggled to win meaningful games. Rutgers was winless against ranked opponents in his four seasons, posting an 0-7 mark during that stretch.

His best season was in 2012, when the Scarlet Knights finished 9-4 and took home the Big East crown. Rutgers also went to three bowl games during that stretch, posting a 1-2 record.

When he first took the job, Brewster said his long-term goal was to win a Big Ten Championship. He never came close in his three-and-a-half year stint.

Brewster’s first season was a struggle, with the Gophers finishing the year 1-11. In 2008 and 2009, Minnesota went 13-13 and reached made back-to-back bowl appearances.

The Gophers couldn’t build on that success though. After starting the 2010 season 1-6, Brewster was fired and replaced by offensive coordinator Jeff Horton.

Minnesota never won more than three conference games and finished seventh or worse in the B1G standings each of the four seasons.

Indiana is a tough job for anyone. DiNardo found his three years in Bloomington especially difficult.

The Hoosiers won just eight games in three seasons under Dinardo, never posting more than three wins in a single season. They also ended each season with a 1-7 conference record.

The peak for DiNardo came in his final season, as Indiana finished the year 3-9. That year, though, the Hoosiers posted wins over two ranked opponents, beating Oregon and Minnesota. 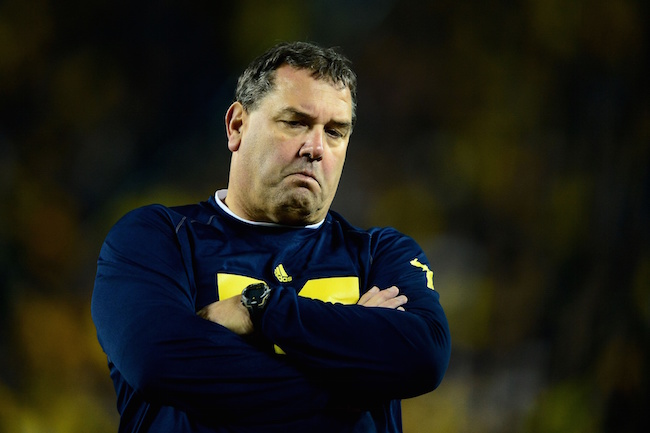 Hoke appeared to be a solid hire after his first season at Michigan, going 11-2 and beating Virginia Tech in the Sugar Bowl in 2011. It all went downhill from there.

The Wolverines steadily declined each of the following three seasons and found themselves left out of a bowl game in 2014. The ultimate embarrassment of Hoke’s stint in Ann Arbor came in September 2014, when Notre Dame held the maize and blue scoreless in a 31-0 route. It was the first time Michigan had been shutout in 365 games.

Michigan finished that season 5-7, winning just three games in B1G play. It was a downward spiral for one of the nation’s most storied programs.

Hoke beat Ohio State in his first season but then dropped three-consecutive games to the Buckeyes. He was fired quickly after the season ended in 2014.

There were some successful stops in Smith’s college coaching career, but East Lansing was not one of those.

Michigan State went 8-5 in Smith’s inaugural season with the program and tallied wins against ranked conference foes Iowa and Minnesota. It ended with a berth in the Alamo Bowl, where the Spartans fell to Nebraska 17-3.

That was the only winning season during the four-year stretch.

In 2005 and 2006, the Spartans were notorious for blowing leads and seemed unmotivated at times. They finished tied for last in the B1G that year, winning just one conference game. Smith’s contract was bought out in November, though he was permitted to finish the season.

Michigan State’s 2003 bowl berth was the only postseason bid the program received under Smith’s direction.

It was difficult for Hope to sustain the success that his predecessor Joe Tiller had enjoyed, reaching 10 bowl games in 12 seasons.

Purdue did post some nice wins, beating Ohio State twice in the Hope era, but the Boilermakers were consistently hovering around the .500 mark. They did make bowl games in 2011 and 2012 after ending the regular season with a 6-6 mark both years.

Though Purdue made the postseason, it never quite lived up to expectations.

In 2012, the Boilermakers were expected to be a dark horse in the B1G and potentially contend for a conference title. Disappointment set it when they finished 3-5 in the conference and were fourth in the Leaders Division.

Hope was fired before the Heart of Dallas Bowl in 2012.

Williams had some big shoes to fill after former head coach Nick Saban bolted for LSU. He was never able to live up to the standard.

Under Saban, the Spartans competed in five-straight bowl games and won 10 games in 1999. That success evaporated quickly after he left.

Michigan State had one winning year under Williams, finishing 7-5 in 2001. It never finished higher than eighth in the B1G and never won more than two conference games in a row.

Williams was terminated late into the 2002 season after the Spartans started the year 3-6. They finished 4-8, marking the program’s worst record since 1991. 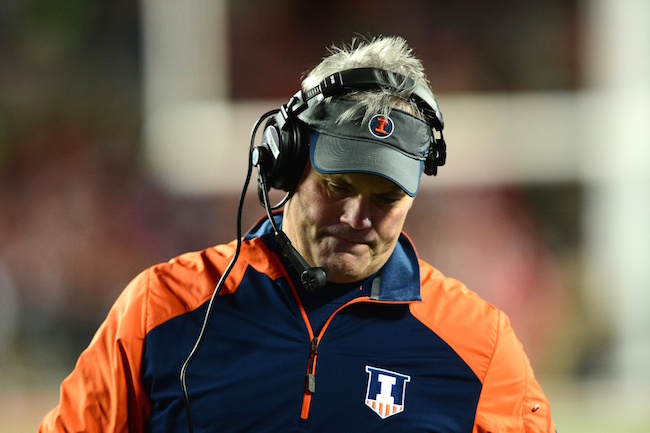 Player accusations of abusive and negligent behavior from Beckman saw the three-year Illini head coach ousted from his position sooner than expected.

Prior to the 2014 season, several players came forwarded about Beckman, stating he had forced them to play through injury and threatened to retract their scholarships. Illinois wasted little time, firing Beckman shortly after the accusations.

It wasn’t a huge loss for the Illini, who had won just a dozen games from 2012 through 2014. Illinois did improve its win total by two victories in every season but it was still nowhere near competing with elite competition.

In three seasons, Illinois never beat a team ranked in the AP top 25.

The move to bring RichRod to Ann Arbor seemed like a good fit for Michigan.

It never paid off.

Michigan finished 3-9 and 5-7 in Rodriguez’s first two seasons, placing him on the hot seat immediately. But the poor records were only the beginning.

Rodriguez had trouble retaining players and saw several transfer out of the program. Many claimed his “lack of family values” as a reason for their departure.

Major NCAA violations were also levied against the program after it was discovered that Rodriguez and his staff were not in compliance with practice and workout regulations.

The Wolverines did improve each year under Rodriguez but he had tarnished the reputation of the “Block M” enough. Rodriguez was dismissed after the 2010 season, after he finished the year 7-6, the only winning record in three seasons.

During Rodriguez’s tenure, Michigan went 0-6 against Michigan State and Ohio State and dropped their three games against the Buckeyes by a combined score of 100-24.

At least he’ll always have this moment: