Wrigley Field wants to host an annual bowl game, which could benefit the B1G

No, it’s not a World Series that the Chicago Cubs covet. They have that now.

According to the Chicago Tribune, Wrigley Field is looking to host an annual bowl game beginning in 2020. Cubs President Crane Kenney told the publication that the Cubs “absolutely” intend on hosting a bowl game when bowl games are up for review.

No bowl games are allowed to be added until after 2019, per the NCAA and Football Bowl Association.

But with Wrigley Field undergoing a massive renovation, the timing could work out perfectly. The Friendly Confines will be even friendlier with the updating of the concourses, press box, visiting locker room, as well as the addition of new hotels and restaurants in the surrounding area.

According to the Tribune, Wrigley Field is already planning on hosting “multiple” Northwestern games beginning in November 2020. The Wildcats played against Illinois in 2010 and over 41,000 people showed up, as did College GameDay. 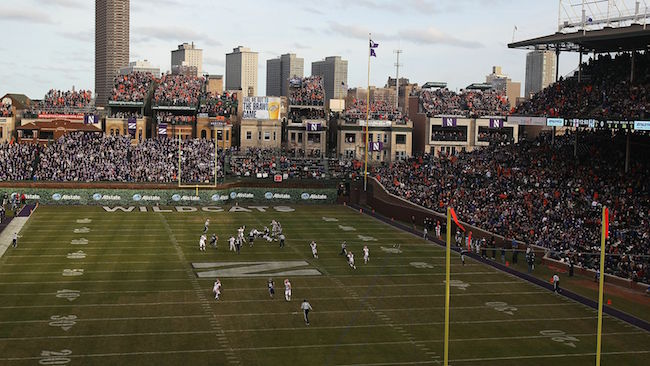 Big Ten Network President Mark Silverman told the Tribune that BTN “would be open to exploring televising a bowl game in Chicago. Our ability to reach over 60 million homes would be a great asset to promote the bowl game.”

That would obviously be a major benefit to the B1G, which would get a rare postseason home-field advantage.

Besides the obvious proximity factor, it would potentially pit a B1G team against another Power Five team in what could be its coldest game of the year. It would essentially flip the script for the B1G.

B1G teams played in the home state of four of its opponents during the 2016-17 bowl season. If Chicago was added, the B1G could have three games (Quick Lane Bowl in Detroit and the Pinstripe Bowl in New York) that would be within the conference’s geographical footprint.

Even if it did replace the Quick Lane Bowl, a bowl game at Wrigley would create a more-centrally located game for the conference. And if past non-baseball events at Wrigley Field are any indication, attendance wouldn’t be an issue.

For what it’s worth, the B1G is 4-2 in the Pinstripe Bowl and Quick Lane Bowl since it aligned with those two games.

Perhaps the addition of another bowl game in B1G country will continue that trend.