For the next two weeks, we’ll be taking a look at where each B1G team needs to improve and answering pressing questions this offseason. For some it’s establishing depth, and for others, it’s learning a new system. Whatever it is, each team has at least five things to take care off before 2016 kicks off:

For the second year in a row, a key backup running back, Dre Brown, went down in spring camp with a torn anterior cruciate ligaement. Brown’s absence means that Illinois is thin at the tailback position behind Ke’Shawn Vaughn. Under Bill Cubit, Illinois needed at least two backs to thrive. Garrick McGee surely wouldn’t mind having a second option, though he might have to work around it.

There will be a prime opportunity for either redshirt freshman Reggie Corbin or junior Kendrick Foster to earn a role in Illinois’ new offense. The problem? They have a combined 78 career rushing yards, and like Vaughn, they’re more of speed backs than bruisers. McGee’s first major challenge is finding a way to make sure that doesn’t become an Achilles’ heel.

Every B1G team has key offensive linemen to replace, many of which are off to the NFL. But four-year starters don’t come around very often. Karras solidified Illinois at right guard since 2012, which means filling that spot is no easy task.

Fortunately for Illinois, it might have its next four-year starter in Gabe Megginson. The former four-star recruit has the size at 6-5, 300 pounds, and he could get a chance to make an immediate impact. He’s been playing both guard and tackle, which means that the Illini coaching staff is planning on having him contribute early and often. Karras set a high bar for Megginson, but it’s one he’s capable of reaching.

Illinois players admitted that last year’s offense was too complicated. McGee’s goal has been to implement his system — he left Louisville to come to a place where he could do that — and make things simpler. That’s really his only option considering he came to Illinois the second week in March. The protection packages are new, and he’s been rotating offensive linemen so that everyone understands everyone’s role in the offense.

McGee also wants to be a run-first offense. Illinois was 13th in the B1G running the ball, which means for the first time in a long time, Illinois might have a back average 20 carries per game. That might not be what Wes Lunt wants to hear, but there’s a reason McGee was one of the highest paid coordinators in the country. The guy knows what he’s doing. 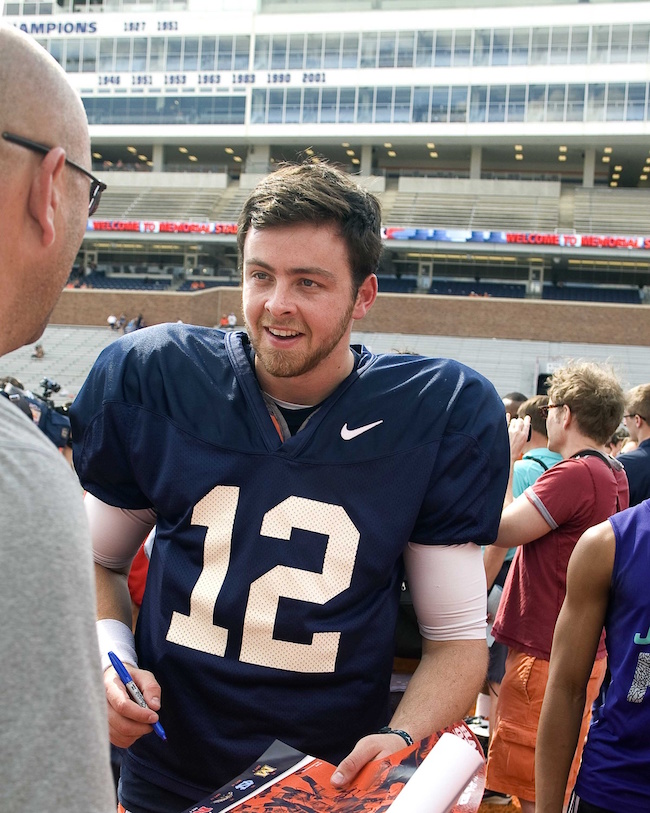 I referenced this when breaking down how important the addition of Hardy Nickerson Jr. was. A sure-tackler is the most underrated thing on a defense, and Illinois lost a few of the B1G’s best in Clayton Fejedelem, Mason Monheim and T.J. Neal.

It’s easy to assume that the addition of Lovie Smith will automatically boost the defense. An overlooked decision Smith will have to make is how much full-contact action he allows in fall camp. Illinois needs to develop that physicality, but it also can’t afford to have guys getting hurt before the season even starts. Smith might have to roll the dice with more full-contact practices than normal to make sure his defense is ready come September.

Illinois athletic director Josh Whitman bought into Smith, and if their initial reactions were any indication, Illinois players did, too. Being in a household name has already helped Smith earn respect among players and recruits, but that’s the easy stuff. The hard part is getting a senior whose had three coaches in the last year to try something new.

There are still guys on this team that were recruited by Ron Zook. It’s not easy to have a revolving door of coaches for a college kid. This team can only have success in 2016 if its seniors buy into Smith and this new coaching staff.

All signs out of camp suggested that happened in the spring. Now it has to carry over into the fall.

Connor O'Gara
Connor O'Gara is the senior national columnist for Saturday Tradition. He's a member of the Football Writers Association of America. After spending his entire life living in B1G country, he moved to the South in 2015.
RECENT ARTICLES
ILLINOIS
Illinois among 4 teams to compete in 2021 Hall of Fame Classic next basketball season
ILLINOIS
Illinois center opts for transfer portal after two seasons
ILLINOIS
What Bret Bielema said after Illinois' spring game
ILLINOIS
What a catch! Luke Ford hauls in impressive one-handed TD grab in Illinois spring game