Illinois vs. Mizzou over/unders: Who we like and who we're betting on during Braggin' Rights rivalry

Illinois will take on rival Missouri on Thursday night in St. Louis in the annual Braggin’ Rights matchup.

This has been a streaky rivalry in the past. Illinois won in 2021, breaking a 3-game Mizzou winning streak. Prior to the Tigers’ run, Illinois had won 5 in a row.

This year, Illinois enters the game as the No. 16 team in the country with an 8-3 overall record. Mizzou sports a 10-1 overall record, but hasn’t played a very tough schedule outside of a rivalry loss to Kansas.

The game is set to tip off at 9 p.m. Eastern time on Thursday night and can be seen on the SEC Network.

Over at Underdog, there are ways to get in on the action by making fantasy picks for this weekend’s player over/under stats.

What is Underdog and why should college hoops fans care?

Underdog is a new daily fantasy platform backed by investors such as Mark Cuban, Kevin Durant and Adam Schefter.

This isn’t what you might think about fantasy sports though. Through Underdog’s “Pick’em” contests, you can bundle a few selections of player prop picks similar to what you find at sportsbooks, and yes, you can put real money against these picks.

Underdog Fantasy is available in 41 states, so a lot of the states where sports betting is not yet legal? Yep, you can do Underdog Fantasy picks for real money, as we’re outlining here. It’s really fun.

If you want to get started, Underdog will match your first deposit up to $100 by clicking here or using promo code SOUTH.

My picks for Illinois vs. Mizzou

The Tigers don’t play much defense, but they do like to get up and down the floor at an impressive rate. According to the KenPom ratings, Mizzou plays with the 17th fastest adjusted tempo in the country.

Running and gunning is just fine with Brad Underwood and the Illini, though. They run the offense with the 56th fastest adjusted tempo, per KenPom.

Expect plenty of points in this game, as Mizzou has the No. 4 offense in the country, putting up 88.4 points per contest. Illinois is tied for 76th in the nation at 78.1 points per game. That’s good for No. 4 in the always-competitive Big Ten, though.

Mizzou doesn’t have a ton of size in its rotation, so my first bet is Illinois big man Coleman Hawkins and the “higher” option for 19.5 points+rebounds+assists. Look for the Illini to get him the ball in the paint early and often and let him distribute to outside shooters or score at the rim.

Speaking of outside shooters, Baylor transfer Matthew Mayer has come on strong lately for the Illini. He’s scored 14 or more points in his last 3 games, so I like his “higher” option for 19.5 points+rebounds+assists, too.

On the Mizzou side, point guard Nick Honor, a transfer from Clemson, isn’t fazed by big-time opponents. In the Tigers’ past 2 games (against Kansas and UCF), he’s had 20 and 22 points+rebounds+assists, respectively. Thus, I like him hitting the “higher” option on 16.5 points+rebounds+assists on Thursday night against the Illini.

How many picks should you make? 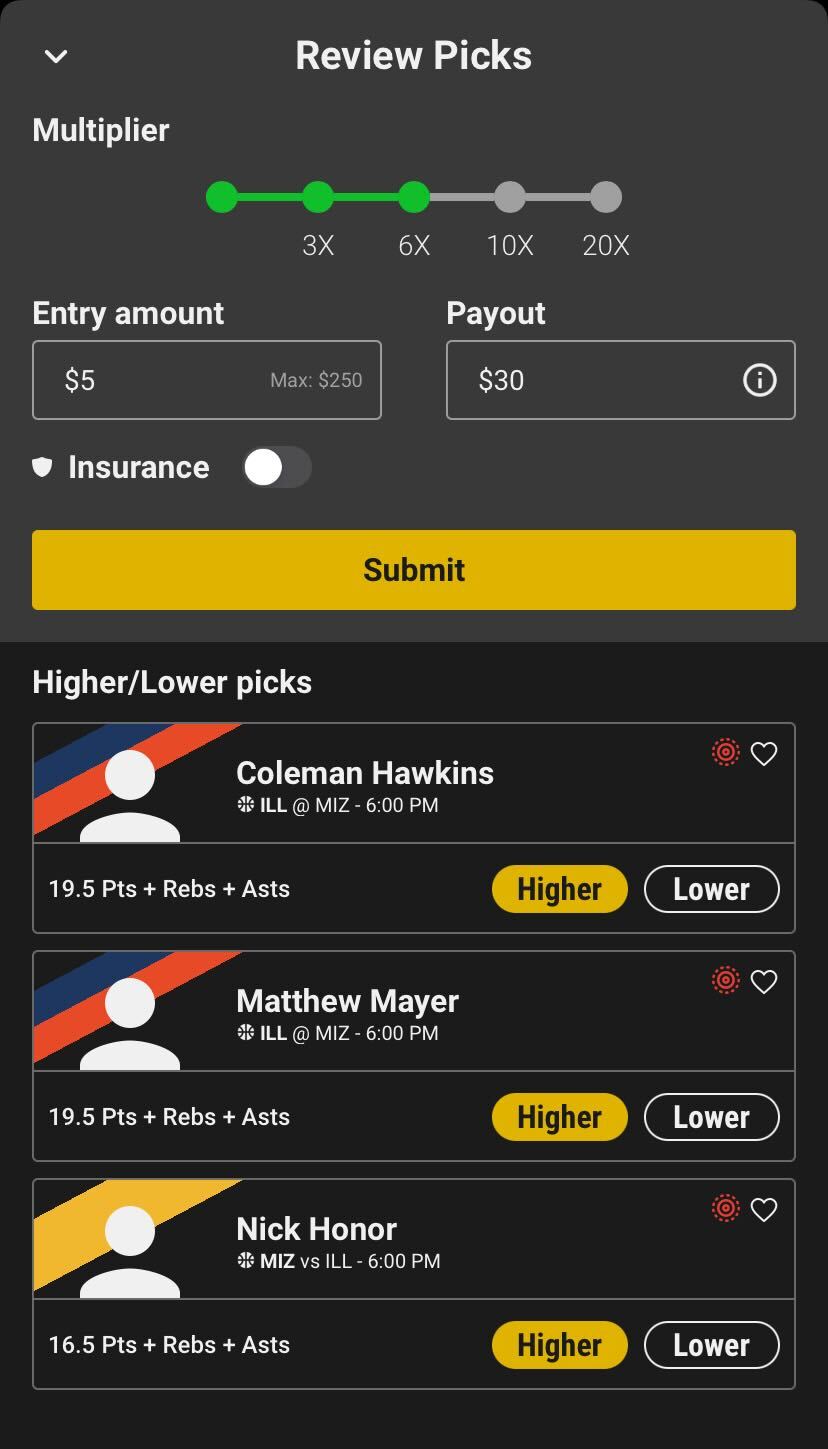 If you want a safer, 2-leg parlay bet, I’d suggest removing Mayer from the equation and going with the “higher” options on Hawkins and Honor. Either way, we should expect plenty of scoring from these 2 talented offensive squads.

Get started on Underdog by clicking here and make your picks for the Braggin’ Rights rivalry or other CFB, CBB, NFL and NBA games. Using this link means Underdog will match your deposit up to $100. If you deposit $25, you’ll get an extra $25 to start playing right away.

Adam Spencer
A 2012 graduate of the University of Missouri, Adam is the news editor across all Saturday Football brands. Follow on Twitter.