Step back to eight months ago.

Lovie Smith was just hired as the new head coach at Illinois. It was a splashy, monumental hire that created more preseason hype about Illinois football than perhaps ever. Season tickets were selling like hotcakes and Illinois had serious momentum.

Step back to last Saturday. On a cold, windy day, Illinois closed out the home schedule in front of a sparse crowd without scoring a point against Iowa. It was about as anticlimactic of a senior day as one could’ve had.

Surely this was not the picture Illinois fans envisioned when they celebrated Smith’s arrival:

There were probably people that saw how weak of a crowd that was and thought, how is Smith ever going to turn this thing around? That question will be answered in time.

Smith has time to fill the seats. Illinois athletic director Josh Whitman will give him every resource he can to do just that. He made a six-year investment into Smith not to see results in Year I. Shoot, Illinois could’ve gone 0-12 and it shouldn’t have changed a thing about the program.

The reality was there was almost no way that Smith was going to turn Illinois into an overnight winner. In this era of the B1G, it’s easy to think that Smith should’ve at least had the Illini more competitive. Mike Riley, Paul Chryst and Jim Harbaugh could all have 10-win seasons by Year 2.

Smith won’t get anywhere near that. Odds are, there will be a couple more bowl-less seasons ahead in Champaign, filled with weak crowds and meaningless November football.

But that won’t mean that Smith is failing at Illinois. If Illinois still hovering near the bottom of the B1G recruiting rankings in a couple years, that’s perhaps more concerning than the on-the-field product.

The biggest question mark coming into Smith’s first year in Champaign was how he was going to fare as a recruiter. Would he have the energy to deal with 17-year-old kids and would he be able to sell him on Illinois?

We’re still nowhere near getting that answer. 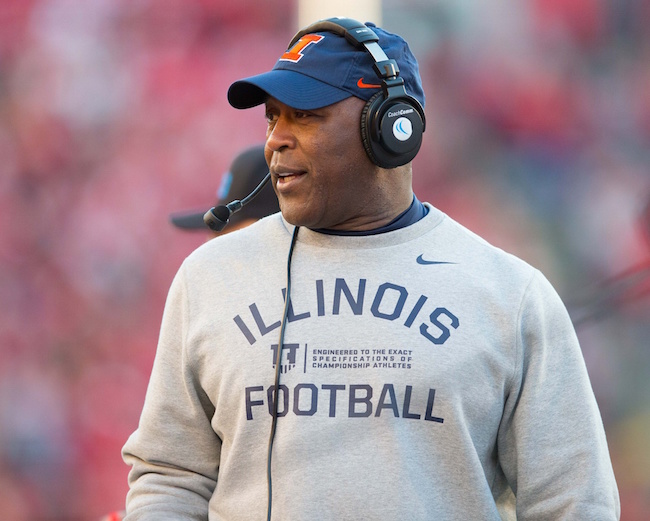 Smith’s first recruiting cycle figures to be a busy one. The good news is that he already has verbal pledges from three of the state’s top 10 recruits. That’s as many as Illinois landed in the last three years combined. With Illinois’ season wrapping up, Smith will get to pour his energy into recruiting for the first time.

It’ll be a couple years until Smith gets his guys on campus and contributing. The fact that Smith was left with anything after Illinois’ 2015 season of turmoil was a miracle in itself.

And frankly, in a typical year, the product on the field wouldn’t have looked as bad as it was. But Illinois was the unfortunate victim of arguably the best regular season in B1G history. On top of that, Illinois’ non-conference slate proved to be one of the tougher draws in the country.

Seven of the eight teams that Illinois lost to received at least five votes in the latest Associated Press poll. The only team that didn’t was Purdue. That means Smith faced a team at least five people feel are top-25 worthy in more than half of his games.

Did Illinois hang tough with those teams? No, but the schedule certainly didn’t do Illinois the favors many B1G West doubters thought it would.

Look at the team Smith will face on Saturday. In a different year, the Wildcats are probably an eight-win team right now. Instead, Pat Fitzgerald needs a win against the Illini just to make it to a bowl.

Besides that, Northwestern has the thing Illinois has been desperate for in the 21st century. No, not the title of “Chicago’s B1G team.” The Wildcats have a steady presence in Fitzgerald. People forget that Fitzgerald’s first season in Evanston was a 4-8 season with dwindling attendance numbers, much like the year Smith just had.

The good news is, it appears Illini fans have patience:

Standing 'O' for Lovie when shown on the Jumbotron at tonight's @IlliniMBB game. ???? #Illini pic.twitter.com/91sz4v6Q6n

If there’s anyone doubting Smith based on the product on the field in 2016, that’s silly. Fans want competitive football, and they don’t want to be a national punchline. That’s understandable.

Even though Illini fans and senior players don’t want to hear it, Smith’s first year in Champaign was always going to be a wash. As long as he didn’t look completely in over his head — suspensions, coaches quitting, etc. — Smith’s reputation shouldn’t have changed in Year 1.

If it did, someone lost sight of the big picture.