Lovie Smith hasn't yelled once since arriving at Illinois, and it's scaring players

CHICAGO — It’s a common sequence of events in spring practice. Player X and Player Y get into a fight, they get separated and the head coach ends the dispute with some scolding of his own. That played out at spring camps across the country.

Illinois dealt with situations like that, too. With a new coaching staff in town and jobs on the line, tempers occasionally flared. Players got into fights, they were separated and their coach promptly…kept quiet and moved on.

Lovie Smith didn’t yell. In fact, he hasn’t yelled in the five months that he’s been in Champaign.

Players knew that Smith was a low-key guy from his days in Chicago. But they didn’t expect him to be this reserved.

“I have no idea why that hasn’t happened yet,” Illinois quarterback Wes Lunt said. “I think it’s scaring us as the days go by.”

Quarterbacks, generally speaking, are known for making their coach’s blood boil. Their mistakes are magnified. A missed read here, a poorly-timed throw there is usually all it takes to warrant a tongue-lashing from the lead man.

Lunt, however, said he’s never even seen Smith’s levels go up. Nobody has. That isn’t lost on anyone in the Illinois locker room.

“Everybody is just waiting for that one moment where he just blows up,” Illinois tailback Ke’Shawn Vaughn said. “Everybody’s just waiting.”

RELATED: Everything you want to know from Day 1 of B1G Media Days

That wait might not have an end in sight. Smith’s former Chicago Bears players like Roberto Garza said they went years without seeing him yell.

As much as some want to see it happen, it might not be a bad thing if it doesn’t.

“I don’t think you want to push him to that point,” Vaughn said. “But if him being mad is calm, let’s keep it right there. Let’s not push it to that point. The day he blows up, it’s gonna be a wakeup.” 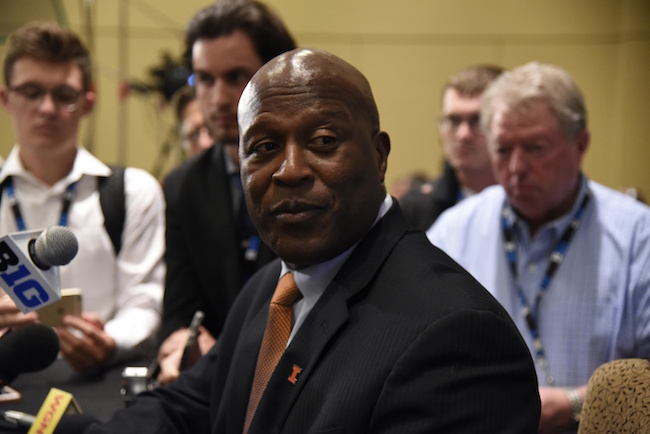 Smith’s calm demeanor was night and day from what Illinois players were used to. This is the same program that was at the center of a nasty player abuse scandal that ultimately got Tim Beckman fired.

Smith might be the least-likely coach to ever get caught up in something like that. He’s a player’s coach through and through. By all accounts, Smith’s players are treated like adults.

Previous regimes at Illinois got on players about little things like the shirt they wore under their shoulder pads. Smith doesn’t believe in micromanaging.

As a result, his players aren’t on edge.

“We’re just more comfortable. He doesn’t yell about a dropped pass. We know we dropped the ball,” Vaughn said. “We don’t need to hear about dropping the ball 10 plays later. He’s moving on.”

RELATED: Everything you might’ve missed from Day 2 of B1G Media Days…and more

Vaughn is a perfect example of that. The sophomore tailback has admittedly had his fair share of bad practices. As underclassmen are prone to do, Vaughn has a tendency to beat himself up after a rough day.

Smith will talk with him one-on-one — without raising his voice — about things he can work on. He reminds Vaughn that “he’s the guy.”

Smith took that a step further when he chose Vaughn as one of three players to represent Illinois at B1G Media Days. What’s the significance of that? Vaughn was the only sophomore among the 39 players in Chicago.

“That’s just the type of guy he is,” Lunt said. “It’s that much more effective. When he speaks, we listen.”

Players said that Smith’s demeanor created more accountability. And if there is an instance that warrants a different tone, Smith’s coordinators are plenty capable of loudly getting the message across.

“If anybody is going to do the yelling, it’ll be (offensive coordinator Garrick) McGee,” Lunt said.

Don’t worry. There’s a yeller on the defensive side of the ball, too.

“Lovie’s not (an energetic guy), but Hardy is,” Dawuane Smoot said of defensive coordinator Hardy Nickerson. “Hardy brings that fire. He’s always saying to bring out that nasty. That’s what he shows everyday in practice.”

Time will tell if coaching at the college level results in Smith developing a mean streak. If his 19 years in the NFL were any indication, it won’t happen anytime soon. Maybe it’ll be a missed tackle or a delay-of-game penalty that finally sets Smith off.

Connor O'Gara
Connor O'Gara is the senior national columnist for Saturday Tradition. He's a member of the Football Writers Association of America. After spending his entire life living in B1G country, he moved to the South in 2015.
RECENT ARTICLES
ILLINOIS
The good, bad and unknown as Illinois winds down first spring under Bret Bielema
ILLINOIS
Illinois among 4 teams to compete in 2021 Hall of Fame Classic next basketball season
ILLINOIS
Illinois center opts for transfer portal after two seasons
ILLINOIS
What Bret Bielema said after Illinois' spring game