During an Under Armour All-America practice, Jeff Thomas ran the route from the slot with Maleik Gray on the coverage. Thomas didn’t get the target, but he probably should’ve. After the play, Team Armour coach Herm Edwards yelled over to Gray to press Thomas.

Edwards knew that Thomas didn’t need much space to get open and rip off a big gain. There was a reason why the four-star wideout came to Orlando as one of top 50 recruits in the country.

The East St. Louis, Ill. recruit earned USA Today first-team All-America honors after leading his squad to the 7A state championship with 58 catches for 1,198 yards and 15 touchdowns.

Yeah, it’s not hard to see how that happened:

Edwards’ good friend, Lovie Smith, made Thomas his top 2017 target after he arrived in Champaign. Before Smith was hired in March, Thomas had zero interest in Illinois. Even as an Illinois native, Thomas grew up an Alabama fan.

Both Alabama and Illinois made Thomas’ initial top three, as did Missouri. But recently, Thomas dropped the two SEC schools for a simple reason.

“(Alabama) wasn’t recruiting me hard enough,” Thomas said. “(Alabama and Missouri) are good schools. I just don’t think they had interest in me as much.”

Right after Smith got to Illinois, he reached out to Thomas on Twitter. Thomas remembered what their first interaction was like.

“(Smith) told me that he needed a ballplayer like me,” Thomas said. “He just wants ballplayers from the Midwest to come to Illinois.”

As it stands, it looks like there’s a solid chance of that happening. The 247sports crystal ball has Illinois as a 74-percent favorite to land Thomas. If he came to Illinois, he’d be the program’s highest-rated recruit since Arrelious Benn back in 2007.

A year after Benn came to Champaign, Illinois picked up a commitment from four-star receiver Terry Hawthorne. Where did Hawthorne play his high school ball? East St. Louis. After a brief professional stint, Hawthorne returned to his old stomping grounds, where he was an assistant coach on Thomas’ squad.

Hawthorne wouldn’t mind seeing Thomas end up at Illinois, too. 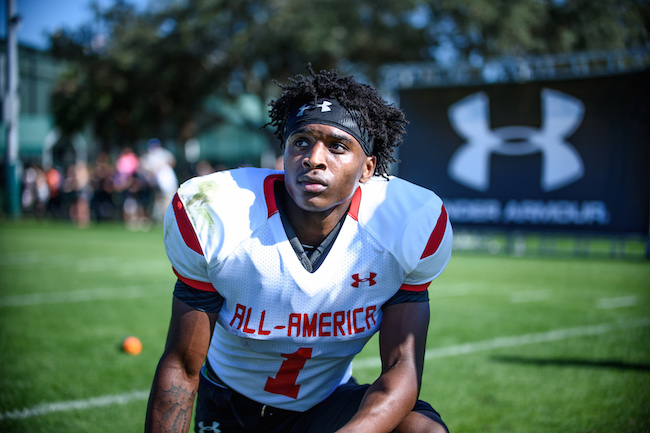 That’s why Illinois appears to have a legitimate leg up on the competition. Add to the fact that Thomas wants to play in Illinois’ spread offense right away, and it’s not a surprise why the Illini emerged as a favorite to land the talented wideout.

But there will be competition in the final month before National Signing Day.

In addition to Illinois, Thomas plans on taking an official visit to Louisville and possibly Oregon. The idea of playing with Heisman Trophy winner Lamar Jackson intrigues him, and new Oregon coach Willie Taggert reached out to him after he was hired a couple weeks ago.

Still, they’ll have some serious ground to make up in order to make a late run at Thomas. And inevitably, Smith will make a strong push of his own. From Day 1, Smith preached the importance of landing the top recruits from St. Louis and Chicago.

Smith and Edwards both get it. You don’t let explosive receivers like Thomas get away.