Hiring Tom Allen was a risk, but it was a smart risk for Fred Glass to take

I was ready to rip into Kevin Wilson.

However it went down, let’s be clear that Wilson did something wrong. Whether the reports of player mistreatment were true or not, Wilson still walked away from a six-year contract a year removed from signing it. Technically. At least that’s the way IU athletic director Fred Glass spun it.

Glass addressed the media after the odd firing of Wilson just days removed from clinching IU’s first consecutive bowl berth in 25 years. Instead of getting peppered by questions about what Wilson didn’t do, he did something smarter. He avoided the topic altogether.

But isn’t that cowardly? Why couldn’t he tell everyone what they believed to be true? Why couldn’t Glass sit up there and address why his biggest hire was leaving at the oddest time possible?

That wasn’t going to help Glass or the program. It would’ve helped us as media members, but it would’ve set his program back even further by going into specifics.

So instead, Glass chalked it up to “philosophical differences” and he sat up on the podium with his new head coach, Tom Allen. And as Glass said, Allen is expected to sign a six-year contract in the near future.

Wait, he offered a guy with one year of experience as a Power Five coordinator a six-year deal? And wasn’t Allen just coaching in high school 10 years ago?

Glass did just that. Is it risky? Absolutely. But it was the move Glass had to take on Thursday. 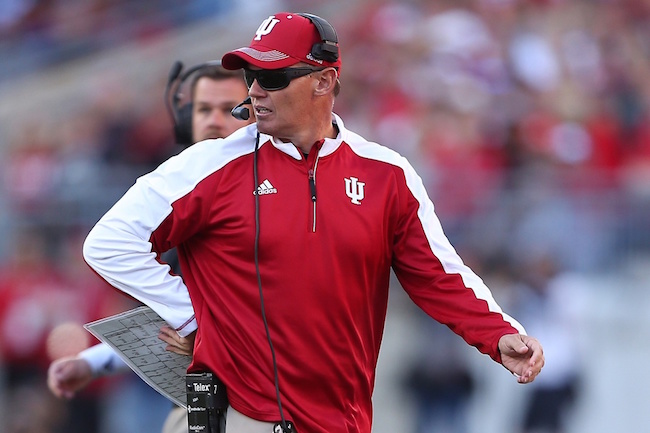 A messy situation could’ve been a whole lot messier if not for Glass. Let’s make that known. He cut ties from arguably the program’s best coach in decades, not because of wins and losses. Instead, Glass had the entire college football world scratching its collective head wondering what happened.

Many ADs would’ve cracked or made a panic move in that situation. That’s an AD’s worst nightmare. A scandal in the midst of unprecedented positivity is disastrous. Instead, Glass used his brain and not his emotions. He agreed to send Wilson off with his dignity and a fair buyout.

He also recognized the urgency of the situation. Some might criticize him for not dipping into the coaching pool and seeing if he could lure an experienced candidate.

Why? He would’ve had to go through a coaching search that lasted several weeks, and there’s no guarantee that he would’ve landed one of his top choices. Keep in mind that this is also recruiting/transfer season. If you have a complete overhaul of your staff, you essentially miss a recruiting class. Kids would’ve de-committed. Players would’ve transferred.

Instead of having two weeks of everyone talking about a player mistreatment scandal and a mystery new coach with recruits, players and staff members speculating, Glass stabilized IU’s foundation.

And in case you forgot, Allen’s defense was the reason IU is going bowling this year. Some thought he should’ve been up for the Broyles Award as the nation’s top assistant coach. Another year of that and he would’ve had head coaching offers.

Will Allen be in over his head? Possibly, but he already knows what works and what doesn’t. He’s known and well-respected in the Indianapolis community, which is his top area of concern for recruiting battles. Allen is also has the high-energy presence you need at a place with a conditional fanbase like IU.

Glass knew all of those things. He also knew that he saw a historically awful defense look like a different unit with Allen running the show. You saw the social media response to the news of Allen’s full-time hiring:

5 minutes of listening to Tom Allen speak & I'm ready to tackle the shit out of any living thing that crosses my path. Love this guy. #iufb

Been texting all day with HS football coaches in Indiana. They love new IU coach Tom Allen, the former coach at Ben Davis. He's one of them.

With that being said Coach Tom Allen is as good as it gets. Not a more deserving coach or man for the job. I look forward to winning a bowl

Allen is someone IU can rally around. Compare that to what could’ve been for IU. If Glass didn’t give Allen that deal, he’d bring in an outsider who would deal with the shadow of Wilson’s confusing end in Bloomington. Chances are, he wouldn’t keep the staff in place. That could’ve included Allen.

Glass avoided what could’ve been a major transition process. By moving forward in the manner that he did, Glass didn’t allow the rest of the IU staff to even skip a beat. They were all on the road recruiting. Now they don’t have to cancel visits, come back and wonder what their futures will hold.

They probably had recruits texting them with questions for about two or three hours on Thursday. Compare that to two or three weeks.

In somewhat improbable fashion, Glass avoided a complete disaster. That’s what he was looking at on Thursday afternoon. The free-fall looked imminent. A program that worked so long to climb just to mediocrity appeared to be back at the bottom of the mountain. IU is still climbing that mountain, but it won’t start nearly as low as it could’ve.

On a day that made many people question the way in which Wilson did his job, Glass deserved nothing but applause for the way he did his.