Does Indiana's emerging defense change its chances vs. Ohio State?

Be honest. If you aren’t an Indiana fan, you probably laughed at that headline. Maybe you did even if you are in IU fan.

How could Indiana — the program trying to make consecutive bowls for the first time in 25 years — beat an Ohio State team that destroyed four teams en route to a No. 2 ranking?

The thought of Indiana ending a 20-game losing streak against Ohio State is indeed crazy, at least according to Vegas. The spread on this game is 28 in favor of the home Buckeyes. Nobody in their right mind would predict the Hoosiers — even coming off the MSU win — to be the team to slip up this Ohio State team.

But here’s a thought. Three of Urban Meyer’s four games against Indiana were within three points in the fourth quarter. And none of those IU defenses were anywhere close to this year’s group. 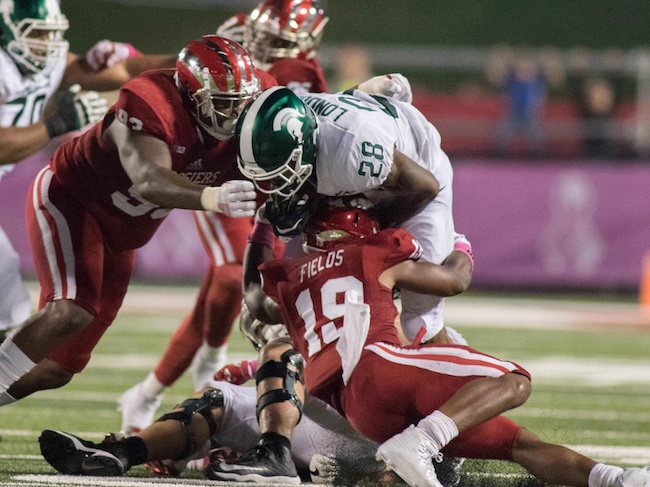 The IU defense is in middle of the pack when it comes to yards per game. The Hoosiers are ranked 51st in the country in yards allowed. Believe it or not, no past OSU opponent ranks higher than Tulsa (61st) in that category.

Last year, IU allowed 509 yards per contest. For a little perspective, only four FBS teams have a worst average than that in 2016.

Still, the Buckeyes needed Ezekiel Elliott to bail them out with a monster second half in order to escape Bloomington with a seven-point win. But Elliott won’t be on the field Saturday, and neither will that porous IU defense.

Just ask Michigan State. Last year, the Spartans scored 24 points in the fourth quarter against IU. This year, MSU managed one scoring drive in the final 19 minutes plus overtime.

“The players are engaged,” Meyer said on the B1G coaches teleconference this week. “We respect every opponent, but sometimes when the film is not very good, that’s where you have to create scenarios or maybe not even show them what you know.

“But when a team is really good — Indiana just beat Michigan State — there’s no issue. It is a problem when the (opponent) is not that good, but that’s not an issue this week.”

Meyer has every reason to take Indiana seriously, especially with the improvement of this defense. We’ve heard a lot about how Ohio State has only allowed two offensive touchdowns this season. Nobody in the country can touch that.

Not far behind in that category is Indiana, which ranks 10th in FBS with just eight offensive touchdowns allowed. That’s an average of two per contest. How many did IU average last year? Five.

All of Indiana’s defenses have been awful since Meyer got to OSU. Each year, his team faced an Indiana defense that ranked in the bottom two in the B1G in yards allowed. And with the exception of last year, Meyer’s offense posted at least 42 points in a victory.

RELATED: The next Percy Harvin? Curtis Samuel has been that and more

That wasn’t against Tom Allen’s 4-2-5. But IU’s solid defensive start obviously wasn’t against any offense with two Heisman candidates. Curtis Samuel has been virtually unstoppable while J.T. Barrett — outside of a couple first-quarter interceptions — has played at an All-American level.

The battle of OSU’s offense vs. IU’s defense could be a bit more even than it’s been in years past.

But that won’t matter very much if Ohio State’s defense continues its rampage. The Buckeyes are first in FBS with 2.25 interceptions per game. Malik Hooker and Marshon Lattimore abused opposing quarterbacks in OSU’s 4-0 start, and they’ll abuse Richard Lagow if he doesn’t play his best game of the year.

It might be a bigger statement if the IU offense gets rolling than if the IU defense strings together a few stops. Kevin Wilson did say that the Ohio State defense is so good that it could win even if the offense never took the field.

Both units will take the field on Saturday, despite the belief by some that the game will be over before it starts. Meyer heard that before multiple Indiana games only to find his team in a dog fight in the fourth quarter.

He’s preparing his red-hot team for another. Just don’t expect this one to be decided by a shootout.