No, that’s not how it was supposed to happen. Indiana was the program that always squandered the prime opportunities.

Remember when Indiana nearly marched down the field and tied it up against preseason national title favorite Ohio State last year? Remember when the Hoosiers were a goal-line stand from stunning No. 14 Michigan last year? What about in 2010 when Damarlo Belcher dropped the game-winning touchdown that would’ve given IU a win against No. 16 Iowa?

Indiana booted countless “over-the-hump” games in the past 10 years against ranked teams at Memorial Stadium. The Hoosiers lost their last 10 home games vs. ranked teams, seven of which were decided by eight points or less.

That is, until Saturday.

Somehow, the football gods were finally on Indiana’s side. The Hoosiers finally got the breaks that they never got and beat a top-25 team. And Michigan State, which made its name on always finding a way, couldn’t in Bloomington.

It was a complete roll reversal. Somehow, someway, the Brass Spittoon is back in Bloomington for the first time in 10 years. How it got there is anyone’s guess. 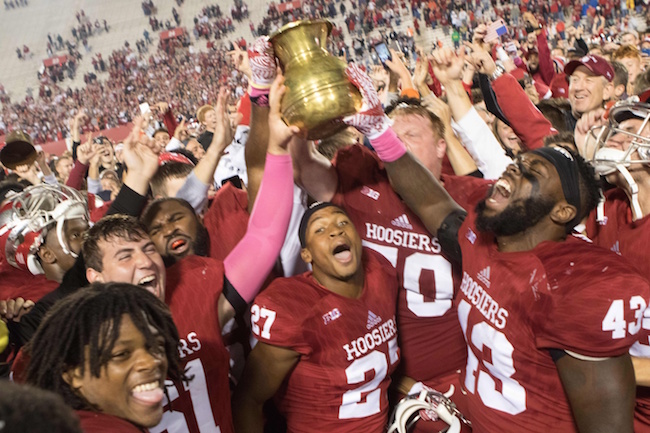 The old “IU can’t win the big one” narrative was playing out again with Michigan State up 14-0 in the middle of the third quarter. The Hoosiers were the ones who kept squandering prime opportunities. Whether it was a Tyler Natee attempting fourth-down conversions or Griffin Oakes missing kicks, IU found new ways to shoot itself in the foot.

But somewhere in the midst of that odd third quarter, the script flipped. MSU was the team that suddenly couldn’t throw the ball. Donnie Corley dropped a sure-fire touchdown. The Spartans couldn’t fall on what would’ve been a game-changing fumble recovery.

For the second straight week, Michigan State completely lost its offensive way. The ground game was non-existent down the stretch. Instead of MSU relying on its strength to put away a less-talented team, it fell back on its heels.

For once, Indiana was the one that got the last laugh.

The team that never buckled down and made the big play down the stretch finally did. After seven first-half penalties, IU wasn’t penalized in the second half or in overtime. This time, it was MSU’s penalty that proved to be the difference.

After Oakes missed what could’ve been a game-winning kick in overtime, Michigan State’s Drake Martinez was called for leaping and Indiana was given new life. Go figure.

And Oakes, who missed three kicks already, finally made a virtual extra point. It was actually tipped, but Indiana got that bounce, too:

It was a wild scene, and surely not one fans are used to seeing at Memorial Stadium. Fitting it was that Kevin Wilson called out Indiana fans and his team for not playing in the fourth quarter. For once, Indiana had a home-field advantage.

And while Indiana is back on track, MSU now finds itself at 0-2 in B1G play. That’s already more losses than the Spartans had in all of the 2015 regular season. It wasn’t Notre Dame who gave MSU that humbling reality. It was a B1G West foe at home and a team that the Spartans hadn’t lost to in 10 years.

The Hoosiers finally finished something on Saturday night. In the process, they finished off any glimmer of hope MSU had of returning to the College Football Playoff. For the first time since he got to IU in 2011, Wilson gave the home fans a quality win.

Just don’t ask anyone how it happened.

Connor O'Gara
Connor O'Gara is the senior national columnist for Saturday Tradition. He's a member of the Football Writers Association of America. After spending his entire life living in B1G country, he moved to the South in 2015.
RECENT ARTICLES
INDIANA
Indiana could be without two starters for season finale vs. Purdue
INDIANA
Indiana OL who appeared in 23 career games hits transfer portal
INDIANA
Dick Vitale labels Indiana-Michigan State game a 'monster' for Archie Miller
INDIANA
Indiana clinches worst 5-year stretch of B1G play in over 100 years