That’s how quickly Tom Allen turned around Indiana’s woeful defense. In his head coaching debut on Wednesday night in the Foster Farms Bowl, the IU defense showed why under Allen, it has the potential to frustrate some of the best teams in the country. Four forced turnovers were proof of that.

That’s how long Richard Lagow got to run the show as IU’s starting quarterback. In his postseason debut, Lagow showed why with him leading the offense, the IU has potential to squash all of Allen’s defense revival. A 36-percent passing clip was proof of that.

Lagow didn’t deserve all of the blame for IU suffering another crushing bowl defeat. To Lagow’s credit, he make some big-time third down throws to move the chains and keep IU alive. And there were more than enough drops to go around.

But his ineffectiveness was evident. Even on the game’s final play, Lagow’s lack of pocket awareness cost him a chance just to attempt a last-second hail mary. As a result, IU came up short against No. 19 Utah after one of its best performances in recent memory.

Allen’s first major depth chart decision as head coach should be an obvious one. By no means should Lagow have the starting quarterback job locked up. 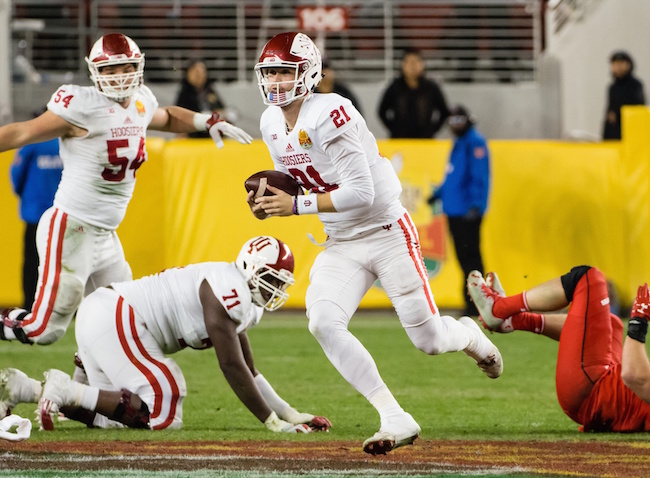 It’s crazy to think that in one season, IU’s identity completely turned around. Twelve months ago, we watched a defense that couldn’t stop mighty Duke and ultimately, fell in a bowl game that it should’ve won.

The same was true on Wednesday night, albeit with a different plot.

Neither team could throw the ball, but Lagow could barely get the ball past the line of scrimmage. That’s right. The 6-6, gunslinger couldn’t throw over defensive linemen. Unofficially, Lagow had eight balls tipped. That’s not a coincidence. That’s a mechanical issue that Utah scouted and capitalized on.

Lagow has had a full year to correct that. He still hasn’t.

That’s perhaps the biggest gripe about Lagow’s play. The JUCO transfer got the benefit of the doubt early in the season because he was still adjusting to Power Five speed. But after going through the B1G East, there’s no way Lagow should’ve shown some of the flaws he did on Wednesday night.

It wasn’t just the tipped passes. It was not understanding how to wait for a screen and overthrowing Mitchell Paige on a crucial third down late in the fourth quarter. It was throwing deep to 5-9 Ricky Jones in double coverage.

???? @Utah_Football forces their 3rd turnover of the game with this @Babymagik32 INT! #GoUtes #FFBowl pic.twitter.com/ATFgKMdEma

They say that the game is supposed to slow down for quarterbacks after a certain amount of time. For much of the 2016 season, the game looked too fast for Lagow.

Sure, he finished second in the B1G passing yards. But Lagow threw 17 (!) interceptions. Goodness, the guy was picked off a combined five times against Purdue and Rutgers in November games.

Odd as it sounds, IU needs more of a game-manager with this new defensive-minded identity. It needs a guy who isn’t going to put pressure on the defense like Lagow did with his mistakes all season. So what if a guy doesn’t have Lagow’s rocket arm?

Ironically enough, Lagow didn’t even make the best throw of the night for IU. Zander Diamont, who announced he was retiring at season’s end, threw one pass.

It was the deep ball IU couldn’t get from Lagow:

Unfortunately, Diamont won’t be in the QB race this offseason. He’s retiring to prevent further head injuries. Diamont would actually be a better fit for what Allen needs compared to when he was when he started as a freshman.

So with Diamont out, that means either Lagow, Danny Cameron or Austin King should get a crack. King did show a lot of promise in the spring, which forced Kevin Wilson to broaden his competition.

Allen doesn’t have to make that decision for a while. He’ll have an entire offseason to think about whether or not Lagow really made enough progress to warrant unconditional starter status.

It shouldn’t matter that Lagow will be a senior or that he looks the part. It should be an open competition without any promises. After all, this is a new era of IU football.

Wednesday night should’ve served as Lagow’s first day with a new boss. Allen is now responsible for the offense that his defense spent far too much time bailing out. Thanks to Lagow, Allen got a new taste of that.

Lagow got his season. Now Allen gets his.

It doesn’t have to be centered around Lagow.