Why should an NFL prospect expose himself to injury if he doesn’t have to? We’re talking about millions of dollars at stake here.

That became a popular topic of conversation a few months ago when college superstars like Leonard Fournette and Christian McCaffrey sat out bowl games to “prepare” for the draft. They didn’t want to jeopardize their first-round status by taking on unnecessary punishment. Some called it an epidemic, even though less than one percent of college football players were in that position.

More common of a position for NFL hopefuls — whether it’s realized or not — was the one Ricky Jones was in a few months earlier.

Entering his fifth year at Indiana, Jones had hopes of finishing his college career off with a bang and getting drafted. That wasn’t a crazy goal for someone who finished in the top 13 in the B1G in receiving yards (906), receiving touchdowns (5) and catches (54) as a junior.

Still, Jones didn’t see his name on the early draft boards. Even if he had another solid year, he realized there was only so much he could prove to NFL scouts as a 5-10 receiver.

So Jones figured out a way to kill two birds with one stone.

“I was talking to coaches in the offseason and I was like, ‘I need to play on special teams because I’m being overlooked already,’” Jones told Saturday Tradition. “I wasn’t hearing my name very much. I wanted to play in the NFL and I wanted to do whatever I could to help my team win.”

Jones actually didn’t return punts or kicks in 2016 (he did as an underclassman and again at the College Gridiron Showcase in January). Unlike most veteran receivers, he made his presence felt on the coverage units. Jones’ efforts even earned him IU’d special teams player of the year honor.

The move paid off for IU. Jones was an indispensable piece in getting the Hoosiers to consecutive bowls for the first time in 25 years.

Now, he’s hoping to become an indispensable piece in the NFL. 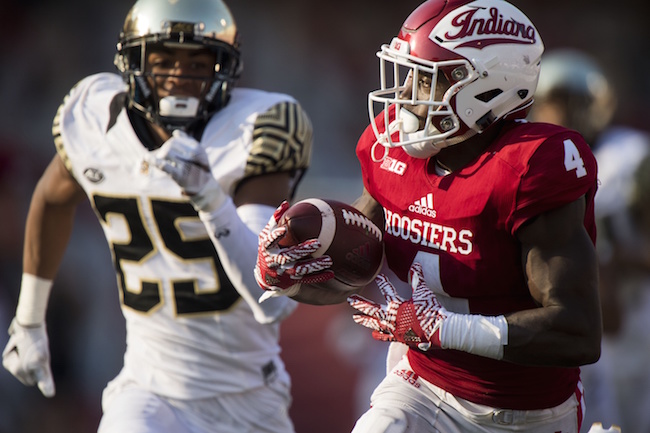 Though he’ll gladly suit up on special teams, Jones’ primary focus is to become a slot receiver in the NFL. He spent the last few months training in three different places.

Jones worked out with former IU receiver Kofi Hughes in the Chicagoland area before heading down to Miami (FL), where he continued his training at Bommarito Performance Systems. Most recently, Jones went back to his alma mater to prepare for the pro day with a bunch of former IU players.

“I’m definitely gonna impress scouts when the pro day comes around. I don’t think a lot of people expect me to run pretty fast,” Jones said. “I’m willing to go out there and shock the world.”

For any slot receiver, the 40 time is crucial. Considering Jones wasn’t invited to the NFL Scouting Combine, his 40 time will be especially important.

He’s well aware of that.

“They know I’m strong with my hands and they know I’m a physical dude. You can see on my film. I run through dudes,” Jones said. “I’ve got a lot of power behind me, but they want to see if I can separate myself when I’m running a route. I believe this training will definitely help with that.”

Jones is right. Check out the film and you’ll see him running through dudes both as a receiver and on special teams (he was IU’s special teams player of the week for that blocked punt at Northwestern).

It’s not hard to figure out why Jones developed his just-get-me-on-the-field approach.

The Sarasota, Fla. native was — not surprisingly — a do-it-all high school player. In addition to starring at receiver, Jones also was a ball-hawking cornerback and an ace return specialist. The Class 4A all-state receiver said he picked Indiana instead of other SEC schools because he wanted to play right away and become a star.

If not for an ankle injury after the season opener in his true freshman season, Jones could’ve been on that path from the jump. Instead, he had to take a backseat while the likes of Hughes, Cody Latimer and Shane Wynn became IU’s go-to targets. It wasn’t until those three guys moved on to the professional ranks that Jones got another opportunity to emerge.

RELATED: Jordan Westerkamp has all the motivation he needs heading into the NFL draft

Jones might not have received much national attention for his production as an upperclassman — Chris Godwin was the only B1G player with more receiving yards the last two years — but program affiliation won’t make or break his NFL career.

“It kinda sucks because it’s not a big-time market like an Ohio State or Michigan, but it kind of humbles you and it gets you ready,” Jones said. “Seeing guys like Shane Wynn, Cody Latimer and guys like that come out and still make a name for themselves, it gives me motivation, too because I know I can do something.”

Wynn and Latimer were in different positions coming out of Indiana. At 5-6, Wynn was undrafted as a slot receiver/return specialist. Entering his third year, Wynn will play for his sixth different team (all preseason roster or practice squad) thanks in large part to his special teams ability.

As one of the top receiver prospects in the 2014 class, the 6-2 Latimer left Indiana early in 2014. The Denver Broncos’ second-round pick only has 16 career catches, but he became a valuable special teams weapon both on the return and coverage units.

Jones wouldn’t mind following in their footsteps. If that’s what it takes for him to make an NFL roster, he’ll be there with bells on.

“All I’m asking for is a shot,” Jones said. “I know that I’m gonna get my shot and I’m gonna shine.”