Saturday could be major swing game for Indiana's bowl aspirations

Spend enough time talking about the Indiana football coach, and you’ll probably hear someone say it.

“It’s a low pressure job. Get to a couple bowl games and they’ll build a statue of you.”

That’s not exactly true. There isn’t a statue of Bill Mallory anywhere to be found on IU’s campus. He, of course, was the last Indiana coach to earn consecutive bowl berths. That happened in 1991.

Spend enough time talking about Indiana’s program, and you’ll probably hear someone say how Mallory shouldn’t have been fired five years after accomplishing that feat.

Kevin Wilson has a chance to join that elusive, multi-bowl game club at IU. Getting back and winning a bowl game was the obvious goal for his program entering 2016. The Hoosiers will have to win three of their final five games to accomplish that feat.

But Saturday’s showdown against Maryland could prove to be the difference. 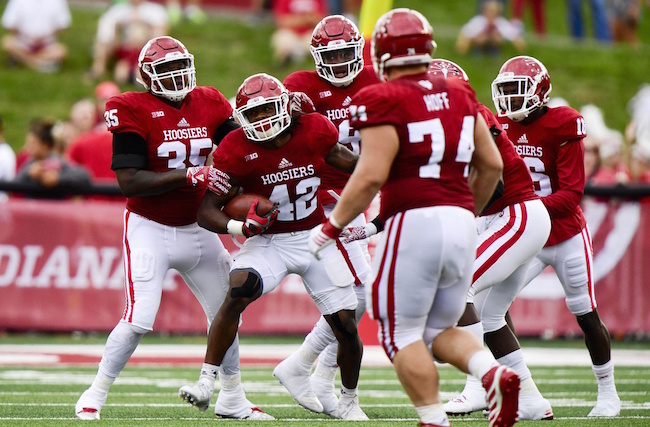 Nobody in the Indiana locker room will treat Maryland as a make-or-break game. They shouldn’t. Ask anyone wearing cream and crimson and they’ll tell you they think they can win out, including that game in Ann Arbor.

But when you break down the final five games of IU’s schedule, it’s obvious how critical Saturday is.

Just in case you need a little refresher, here’s the remaining 2016 slate:

Games aren’t played on paper. Wins and losses are never assumed. Bowl probabilities, however, take the odds into account.

Indiana has two games remaining that it should win. If the Hoosiers lose to either Rutgers or Purdue, they don’t deserve a bowl berth. That would put IU at five wins.

If the Hoosiers fell to Maryland, they would need to take down either Penn State at home or Michigan on the road. Let’s not bank on the latter happening and focus on PSU. A game that once looked like a coin flip isn’t looking like much of a coin flip anymore. The Lions are winners of three straight and are coming off an upset of No. 2 Ohio State.

IU, in all likelihood, won’t be favored when the Lions come to Bloomington. If the Hoosiers fell to Maryland, their postseason goals could come down to whether or not they can shut down Saquon Barkley. He was hurt in last year’s game in Happy Valley, so the IU defense lacks any familiarity with the B1G’s most dynamic offensive player.

Does that mean Indiana shouldn’t even show up against Penn State? Of course not, but it can make life a whole lot easier on itself by taking care of Maryland. Relying on IU to take down another ranked team might be asking for too much.

What about Michigan State, you ask? While it seemed like a huge win at the time, the now 2-5 Spartans weren’t exactly a top-25 team. Penn State, after taking down Ohio State, is much more battle-tested and worthy of a top-25 ranking than MSU.

None of that will be a topic of conversation for Indiana on Saturday. Containing a versatile Maryland running game and getting a struggling offense going will be the top priorities for the Hoosiers. They won’t clinch a bowl berth with a win, and they won’t be eliminated from the postseason with a loss.

But if they drop another winnable B1G game, the odds of seeing Wilson’s statue go up in 2016 will take a significant hit.