It was supposed to happen last year.

LeShun Daniels, Jr. was an obvious preseason pick as a B1G breakout candidate, and with good reason. He was healthy after foot surgery cut his 2014 regular season short. Workhorse back Marc Weisman was no longer in the picture after graduating and heading off to the NFL. Iowa’s offensive line was loaded with eventual All-B1G starters like Jordan Walsh and Austin Blythe.

On top of that, Daniels was looking and feeling better than he’d ever felt. Iowa strength and conditioning coach Chris Doyle put him on a high-protein, low-complex carbs diet that allowed him to slowly shed roughly a dozen pounds. Down to 225 pounds, Daniels was ready to become the multi-dimensional back he always hoped he could be.

With he, Jordan Canzeri and Akrum Wadley, Daniels was confident that Iowa’s backfield would look as good as ever.

“It would’ve been a really scary sight for other teams,” Daniels said. “But obviously that’s not how it worked out.”

Iowa’s dominant offensive line covered up the fact that it was an injury-riddled year for the Hawkeye tailbacks, especially Daniels. Another mid-season ankle injury — though he didn’t fracture it like he did in 2014 — limited him throughout the first half 2015. Instead of having 10 games with 20-plus carries last season, Daniels had three.

“It’s hard,” Daniels said. “Being hurt in the season is one of the toughest things to go through as a player because you only have so much time and so many games that you’re going to be out there.”

Daniels’ health is priority No. 1 heading into his final season in Iowa City. The guy who never dealt with anything worse than turf toe in high school has been an all-too-familiar face in the training room. It’s the same song for Daniels heading into 2016, but with a new verse.

Gone is Canzeri, who led Iowa in rushing despite dealing with injury issues of his own. The departures of Blythe and Walsh meant that Iowa lost four NFL offensive linemen in two years.

“Not many people get the opportunity that I’ve had to run behind offensive linemen like that,” Daniels said. “I’ve got to try and take advantage of that opportunity so that I don’t have any regrets.” 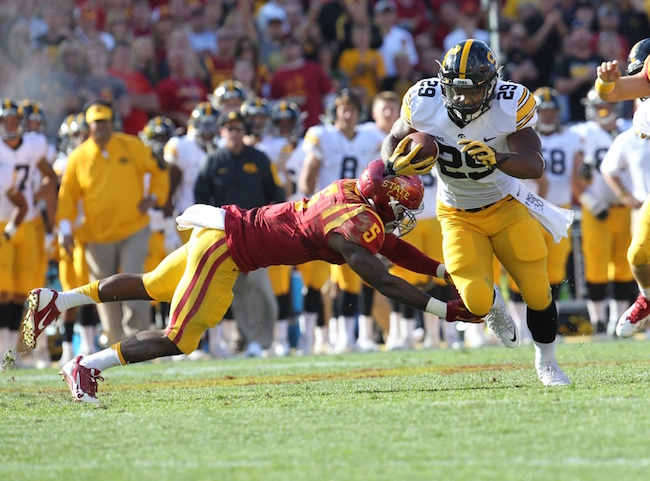 Just like he did entering 2015, Daniels isn’t leaving his diet up to chance.

Like any college kid, Daniels enjoys fast food. As an underclassman, his diet wasn’t loaded with junk food, but on most days, he consumed whatever was available to the football players without really much of a thought.

“I ate somewhat healthy, but nowhere near as healthy as I should’ve been eating,” Daniels said. “I always found a way to eat fast food or eat junk food and get stuff like that in my body. I’m not going to say that I didn’t care about it, because that’s obviously a part of being a Division I athlete. But I didn’t really think of it helping out my success all that much in comparison to training, conditioning and practicing.”

Following Daniels’ injury-riddled 2014 season, he and Doyle mapped out a modified diet. The goal wasn’t to overhaul his meals. Losing his muscle wouldn’t help him become the powerful back he was expected to be in 2015.

Instead, the target weight 223 pounds. That meant cutting back on the complex carbohydrates and getting more fruits and vegetables in his diet. Doyle started by giving Daniels a list of foods to get into his system and recommended portion sizes. Doyle envisioned a plan — the occasional cheat day was allowed — that would allow Daniels to slowly shed weight over the course of several months.

“LeShun got to the point where he was pretty big. He was walking around at 235, 238,” Doyle said. “He’s as strong as any tailback I’ve ever worked with so he had great strength and power. One area he could improve upon was his acceleration and his change of direction. So we’re like, ‘Alright, what do we really want here? What’s going to be most beneficial for him?’”

Doyle did something similar with Wadley this offseason. Like Daniels, Wadley was also put on a plan that would help him get to a more versatile weight. But Wadley, who began his career at 167 pounds, was tasked with beefing up from 184 pounds to 200 pounds. With Wadley, the goal was gaining lean body mass.

That’s never been a problem with Daniels.

“He’s built like a Mack Truck,” Doyle said. “Strength and lean body mass is not a weakness. But if we can take that Mack Truck and make it a little more agile and a little better acceleration and cutting ability, it’d be hard to stop.” 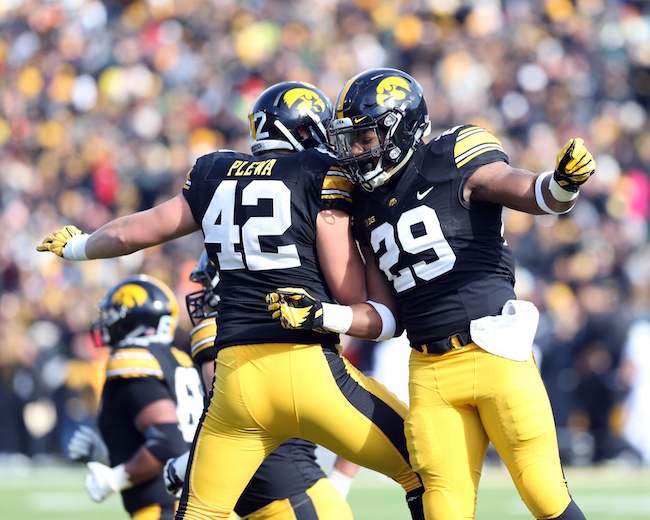 Daniels is every bit of a workout warrior. Ankle injuries didn’t slow down his weight room feats for long. Months removed from the ankle sprain that sidelined him for much of 2015, Daniels squatted a personal-best 545 pounds.

You can see that in the first 20 seconds of Iowa’s offseason weightlifting trailer:

For comparisons sake, Heisman Trophy-winning tailback Derrick Henry caused a stir when he posted a video on Instagram of himself squatting 500 pounds. Daniels has seen the viral videos of Henry and other college football players in the gym. He doesn’t want to get caught up in that. He does, however, have a friendly competition going with his younger brother, Iowa offensive lineman James Daniels.

But with James’ 60-pound advantage, who lifts more?

“Oh, me for sure,” LeShun said. “He’s getting there, but he’s still young. He’s catching up really fast. Right now, I’ve still got the edge.”

In James’ defense, he was sidelined all spring with a knee injury. But he is expected to be healthy and in a bigger role in 2016 after getting action as a true freshman.

Whether it’s at guard or center, he’ll have a chance to block for his big brother full-time — if both stay healthy — for the first time since high school.

“I’m gonna try to take advantage of it, and I know he is, too,” LeShun said. “To be able to have this opportunity to play with my brother will just hopefully make 2016 a great year.”

RELATED: C.J. Beathard didn’t play in Iowa’s spring game, but not because of a groin injury

For that to happen, Daniels knows his first step is staying on the field. When he’s been able to do that, he’s shown promising flashes. He opened the 2015 season with 26 carries for 123 yards against Illinois State. After getting back to full strength from his ankle sprain, Daniels ripped off a career-high 195 yards and three touchdowns, including a 51-yard score that erupted Kinnick Stadium in a victory against Minnesota.

But the ankle injuries, both of which could’ve happened on any play, overshadowed Daniels’ career to this point. That won’t fly in his final season.

His focus is still on controlling the things he can control — his diet, strength and attention to detail — and letting the rest play out. He said he doesn’t want to feel like he did when he watched Iowa’s storybook run come to a bitter end against Stanford in the Rose Bowl. Daniels is insistent on leading the Hawkeyes to a better ending and finally maximizing his opportunity.

Daniels doesn’t have to be reminded of the obvious — it has to happen this year.