Derrell Johnson-Koulianos knows all about Kirk Ferentz’s ways. During his time in Iowa City, the former Hawkeye receiver admittedly pushed the limits of his head coach.

On Tuesday, news came out about Iowa losing another Texas recruit. Ferentz was questioned that day about his rule that if a recruit takes another visit, he’s no longer committed to Iowa. That sparked Ferentz to debunk the entire recruiting system and air his frustrations on the issue.

It’s been reported that four-star Texas running back Eno Benjamin had his scholarship pulled from Iowa because he wanted to go through the recruitment process like an uncommitted recruit. That is, he wanted to take visits and he wasn’t afraid to entertain people tweeting at him about going to somewhere other than Iowa.

It’s believed that the two other Texas de-commitments were in part because of Ferentz’s policy, which they didn’t believe was fair. The latest de-commitment claimed Ferentz tried to get kids with other commitments to take visits to Iowa.

Johnson-Koulianos, AKA DJK, shed some light on the current situation Ferentz is dealing with: 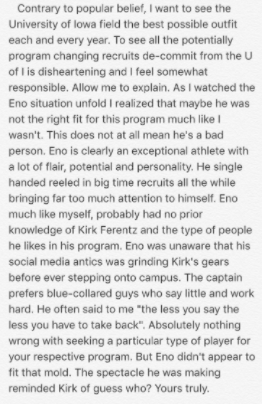 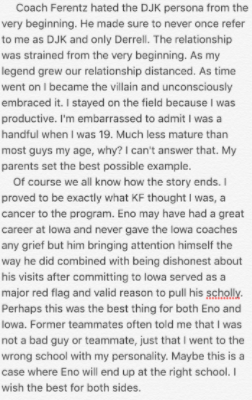 Johnson-Koulianos is basically saying that Ferentz isn’t about to change his policy for one recruit. And while some might turn a blind eye to character concerns in the recruiting process, Ferentz isn’t one of those coaches.

Fans might be frustrated that Iowa is losing scholarships because of a rule that not everyone abides by, but DJK’s perspective is one to consider. Ferentz was defended by a former high-profile player that he didn’t see eye-to-eye with.

Will Ferentz ever change his policy? Perhaps, but he isn’t about to let 17 and 18-year-old kids make his decisions.