Here's a wild stat about Kirk Ferentz that'll surprise you

When Bob Stoops surprisingly stepped down at Oklahoma a few weeks ago, Kirk Ferentz became the grandfather of college football.

No FBS coach has been at his current job longer than Ferentz has. And while some might not put the Iowa coach on the same level as Stoops, he’s certainly had plenty of success in Iowa City.

How successful has Ferentz been in his 19 years at Iowa? 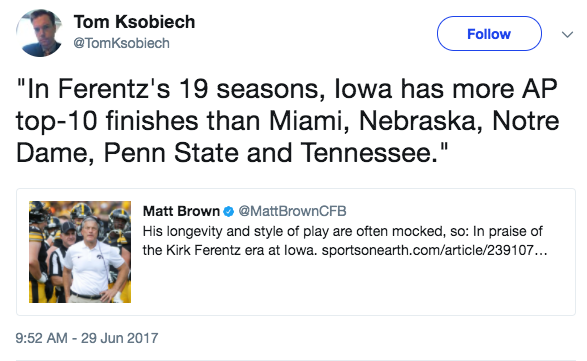 Yes, that is indeed true. Ferentz led Iowa to five top-10 finishes in this 19 seasons. During that stretch, Miami (FL) and Penn State had four, Notre Dame had three, Tennessee had two and…Nebraska had three.

Not included in that stat is the fact that Iowa has as many top-10 finishes as Michigan since 1999.

All of those schools, one could argue, are traditional powers in college football. With the exception of Miami (FL), all of them have diehard fanbases that have bigger national brands than Iowa.

But Ferentz withstood a few down seasons and put together a résumé that might surprise the average college football fan.

Actually, it would probably surprise those diehard fans at Nebraska, Notre Dame, Penn State and Tennessee, too.