Digging into Iowa's recent bowl game struggles: Why they could end vs. Florida

It probably feels like a long time ago. Blaine Gabbert was the quarterback for Missouri, which was supposed to dominate Iowa from start to finish. Instead, Gabbert and the Tigers threw away a late chance to win it and the Hawkeyes earned an upset victory.

That was the last time that Iowa went into an offseason with momentum. Since then, it’s been nothing but frustration for the Hawkeyes in the postseason.

Four straight bowl losses — five straight postseason losses if you include the B1G Championship — haven’t given Iowa the closing statement its been searching for.

Three of Iowa’s four bowl losses were ugly, too:

Can one game spoil a season? That can be debated, but any Iowa fan will tell you that last year’s Rose Bowl whipping certainly put a damper on Iowa’s historic 12-0 regular season.

Iowa won’t be playing in the grandaddy this year, but there will still be plenty at stake in Tampa. Back-to-back seasons of nine-plus wins shouldn’t be ignored — take note, Nebraska — and neither should beating an SEC division champ.

Why has Iowa been so bad in bowls recently? Can this year be any different? 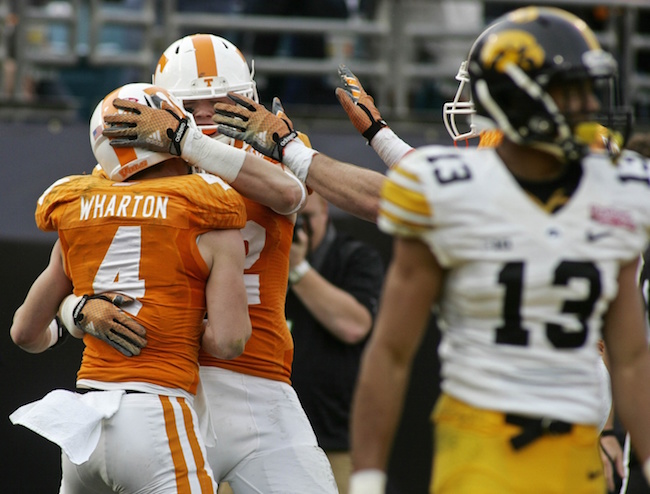 Kirk Ferentz isn’t oblivious to the bowl losing streak. He addressed it multiple times immediately after finding out that Iowa would be playing in the Outback Bowl. Admittedly, Iowa’s bowl approach was a bit stale.

Traditionally, the team spent roughly 10 days (!) at the bowl site. No wonder Iowa played like a team on vacation. The new plan is apparently to treat it as a road game and not spend as much time in Tampa as they normally would.

Yeah, that’s probably a good reason to shake up the bowl routine a bit.

That obviously isn’t conducive to Iowa’s style, which is all about running the ball and wearing teams down. That’s exactly what the Hawkeyes did in their three-game winning streak to end the season.

Iowa actually went into the 2014 Outback Bowl on a three-game winning streak with wins against the likes of Michigan and Nebraska, as well. The Hawkeyes were a touchdown short of beating an LSU team that had Odell Beckham Jr., Jarvis Landry and Jeremy Hill:

But in the other three bowls in the losing streak, Iowa was coming off a loss. Couple that with the awful starts and it’s easy to infer that Iowa wasn’t in the right state of mind to hang with a quality football team, much less beat one.

There really hasn’t been some gadget formula to beat Iowa. The bowl losses came against teams that were content to pound the rock.

For the record, the run-to-pass ratio was a bit skewed because of how poorly Iowa started in those games, but it wasn’t like the Hawkeyes put the clamps on in obvious running situations in the second half.

Is there anything that would suggest this year could be different for Iowa? Yes, actually.

And in case you forgot, two of Iowa’s wins were against Michigan and Nebraska, both of whom are top-25 teams. The question of course is whether or not that defense will be the one that shows up in Tampa.

The good news for Iowa is that it won’t be asked to shut down a Hill or a Christian McCaffrey. Instead, it’ll face former Purdue quarterback Austin Appleby, who leads a Florida offense that was 113th in rushing and 84th in passing. Florida didn’t score more than 24 points in its final six games.

But don’t forget that Appleby is capable of this:

Austin Appleby says, "Get off me, human." pic.twitter.com/0vUlZnbF4B

On the flip side, Iowa allowed an average of just 2.5 points per first quarter in 2016. The Hawkeyes allowed just one first-quarter touchdown in their final seven games.

In other words, the chances of Iowa looking up at a 28-0 deficit are slim.

In years past, you could understand why Iowa didn’t come ready to play in bowl games. College kids get 10 days (!) in Florida or California in the middle of a brutal Iowa winter. They aren’t playing a rival or for a conference title. Not to say that it lacks meaning, but non-headliner bowl games aren’t the easiest to get amped up for.

And as for the Rose Bowl drubbing, Iowa looked like a team that left it all on the field a few weeks earlier in the B1G Championship. It had the unfortunate task of containing the best player in the country after he was snubbed for the Heisman Trophy. It happens.

There should be no excuse for the Outback Bowl to be “another one of those games.” Iowa proved in 2016 that when it shows up firing off the ball, it wins. That was easier said than done, but Iowa made it look easy down the stretch.

With a chance to clinch a nine-win season, end its bowl skid, and somehow finish with a better season than Nebraska, Iowa has plenty to play for.

If the Hawkeyes realize that, they’ll finally get that offseason momentum.