In routing Nebraska, Iowa ended how it was supposed to play throughout 2016

Entering 2016, Iowa was supposed to be a physical, run-heavy team with playmakers at each level of the defense. The Hawkeyes were the ones with the All-American defender and All-B1G quarterback returning. Ten weeks ago, some were wondering if this team was even better than last year’s Rose Bowl squad.

They were supposed to be. But they weren’t. Well, not until mid-November.

On Friday, Iowa was everything it was supposed to be in 2016. It was the third straight game in which the Hawkeyes looked not just like a top-25 team, but a top-10 team.

Iowa’s dominant showing against Nebraska was bittersweet. Beating developing-rival Nebraska is always a perk — as was preventing the Huskers from sneaking into the B1G Championship — but Iowa wasn’t playing for anything more than an eighth win, a fuller trophy case and a better postseason destination.

As Hawkeye fans watched seniors like Desmond King, C.J. Beathard and George Kittle play their final game in Kinnick Stadium, there had to be some mixed emotions there.

Why did it take so long? 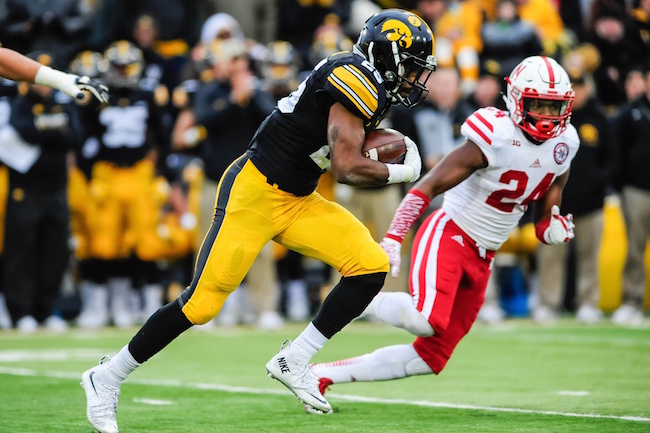 There’s no clear answer to that question. You’ll hear a variety of reasons why the same Hawkeye team that beat Michigan and Nebraska couldn’t handle North Dakota State and Northwestern.

Those reasons are all understandable. But injuries happen to every team, and frankly, Iowa was relatively healthy on the defensive end throughout 2016.

So why did it take until Week 11 for the Hawkeye defense to look like the B1G’s best? In the last three games, it was. When Nebraska scored its first touchdown in the third quarter, it snapped Iowa’s streak at 136 minutes and nine seconds without a TD allowed.

RELATED: Why manufactured or not, Iowa-Nebraska is becoming an actual rivalry

Wasn’t this the same unit that Penn State accused of quitting in the second half? Since that embarrassment in Happy Valley, Iowa did the exact opposite of quitting. It played. It played like it finally found its mojo.

Besides dominating the line of scrimmage, it felt like an Iowa linebacker got a hand on every other Tommy Armstrong pass. That wasn’t just a “right place at the right time” thing. Ben Niemann and Josey Jewell played like a B1G Championship was at stake.

And speaking of that B1G Championship — Iowa was all but eliminated from making it after losing to Wisconsin — that was the Iowa offensive line many predicted would pave the way to Indianapolis. On Friday, Iowa racked up 262 rushing yards. There were big holes and big plays galore against a solid Nebraska front seven:

With the exception of a brief moment in the third quarter, Friday felt like complete domination. You could argue that was the best game the Hawkeyes played in the last two years. Considering there was a Rose Bowl sandwiched in there, that’s saying something.

Even in last year’s regular-season finale, Iowa might not have won that game if Armstrong threw three interceptions instead of four. Iowa beat the No. 16 team by 30 points without forcing a single turnover.

Iowa was the team that spent all but three weeks outside of the Associated Press top 25. From the North Dakota State loss to the Penn State loss, there was nothing about Iowa that even suggested “top 25.” But on Sunday, the Hawkeyes will have way more than the seven AP votes they got last week.

Iowa will finish the 2016 regular season not very far behind from where many predicted it to be. The Hawkeyes won’t return to Indianapolis or Pasadena. They won’t cause debate in the College Football Playoff picture.

Iowa could’ve had an encore. The talent was there. Why it took the Hawkeyes so long to realize it, we’ll never know.

But hey, better late than never.