For the next two weeks, we’ll be taking a look at where each B1G team needs to improve and answering pressing questions this offseason. For some it’s establishing depth, and for others, it’s learning a new system. Whatever it is, each team has at least five things to take care off before 2016 kicks off:

Whatever it takes to get Beathard healthy, do it. The senior quarterback is the most valuable piece on the roster.

Iowa made the smart move by sitting Beathard in the spring game. It actually wasn’t the offseason sports hernia surgery that sidelined him. But whether it’s his shoulder, hip or groin, Iowa can’t afford to have Beathard at less than 100 percent heading into 2016. The second-team All-B1G quarterback is at his best when he’s able to extend plays and pick up first downs with his legs. Iowa didn’t have that element down the stretch and it showed.

RELATED: C.J. Beathard didn’t play in Iowa’s spring game, but not because of his groin injury

Beathard needs mental reps, but he’s not a guy you have to worry about going through fall camp as a full participant. Iowa will undoubtedly be extra cautious with him, which isn’t a bad thing. Beathard’s health will remain a storyline through training camp. But if Iowa handles his situation properly, his play will overshadow that come September.

One of the more underrated departures in the B1G was Tevaun Smith. He might’ve lacked the next-level skill set, but Smith was Iowa’s best home-run threat. He had 10 catches of 30-plus yards in his career, including two that went for 80-plus yards in 2015.

With Smith gone, Iowa needs another guy who can take the top off the defense. Matt VandeBerg and George Kittle are reliable targets, but they aren’t necessarily guys that can make a play like Smith did in the B1G Championship. Sometimes you need that.

Jonathan Parker, Jay Scheel and Jerminic Smith could all become those guys. Smith was the only one of them who even had a catch in 2015. Lost in the shuffle of Jordan Canzeri’s 256-yard game was Smith’s 118-yard day, which marked the first time a true freshman recorded 100 yards receiving in a game during the Kirk Ferentz era. But that accounted for all but two of his catches last year.

Beathard just needs someone who can make a team pay for biting on the play-action. If Smith, Parker or Scheel can provide that element, Iowa’s offense will still be plenty dangerous.

Every defense wishes it had someone like Jordan Lomax on the back end. Having a safety who can deliver a big hit — and not get flagged — is invaluable.

Brandon Snyder could fill that role. The walk-on — yes, he’s still a walk-on — is a former linebacker who isn’t afraid to lay the wood at the second level. Snyder spent 2015 learning from Lomax, who also switched to safety at Iowa. Snyder has quite the backstory, too.

Lomax thrived in his role because Jim Thorpe Award winner Desmond King and veteran Greg Mabin matched up well in one-on-one situations. Both of those guys are back, as is starting strong safety Miles Taylor. That should give Snyder a chance to pin his ears back. If he develops this offseason as much as the Iowa coaching staff expects him to, Iowa could easily have one of the best secondaries in the country. 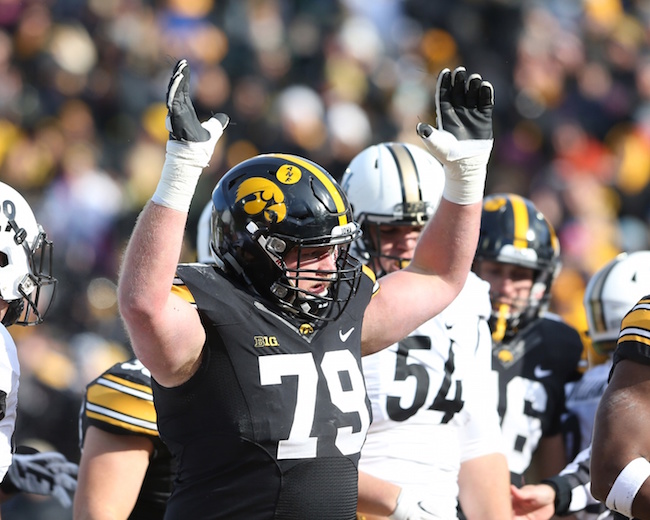 When you recruit offensive linemen, you hope they turn out like Austin Blythe and Jordan Walsh. They combined for 86 career starts and they were versatile. Iowa has never been afraid to try guys out at different spots up front, which they could do to replace those two.

That starts with the indispensable Sean Welsh. The junior has all the makings of Iowa’s next great offensive lineman, the only question perhaps is where it’ll be. He’s started at every position but center in his first two seasons of action. And go figure, he was listed as the team’s starting center and right guard this spring with James Daniels injured.

Daniels will likely start at one of those two spots with Ike Boettger and Cole Croston at tackle and Boone Meyers moving inside to guard. All five of Iowa’s expected starters started at some point last year, but all of them have moved around plenty in their careers.

Even though Ferentz prides his line on its versatility, he wouldn’t mind having everyone in their future spot by the time fall camp rolls around.

5. Remember, but don’t live in the postseason

When a team suffers two crushing postseason losses like Iowa did — albeit in different fashion — there are two approaches to take. The first is to put those games in the rearview mirror and call it water under the bridge. The other is to remind players of it all offseason and let it serve as motivation.

I vote for a mix of those two approaches.

Iowa does need to move on from the Christian McCaffrey-led massacre in Pasadena. That was one bad 60-minute stretch after Iowa had 13 good ones. That loss didn’t define Iowa’s season, as much as some critics wanted it to.

RELATED: Four-star running back commits to Iowa over Baylor, Michigan

Part of what made Iowa special in 2015 was its “us-against-the-world” confidence. The offensive line believed it could take anyone. Beathard wasn’t afraid to risk his body to gain the extra yard. King thought he could pick off every pass, and basically did.

For Iowa to get back to that level, that starts with the right summer approach. Living in 2015 won’t yield success this year. Iowa was disciplined and motivated throughout its best regular season in school history. Anything less than that won’t fly in 2016.