In the final minutes of Iowa’s loss to Northwestern, the narrative became obvious.

Many said that two weeks earlier after the Hawkeyes lost to North Dakota State. The optimistic view of that game was that while Iowa was not going to run the table in the regular season, it wasn’t a B1G loss.

Getting trounced by a Northwestern offense that struggled against a far-weaker FCS foe than North Dakota State solidified the belief that you could stick a fork in Iowa.

In fact, we wrote in this very publication after that week how we already knew we’d have two new teams in the B1G Championship. That very well could be the case in 2016. Given how good Nebraska and Wisconsin look in the early part of 2016, either one of them is the likely pick to make it to Indianapolis.

But heading into the fifth conference game, Iowa is still in control of its own destiny in the B1G West. Iowa has three games left against top-10 teams, all of which are at home. That begins this week against Wisconsin. Iowa has road games at Penn State and Illinois, both of which are winnable.

Yes, it’s been ugly for Iowa so far. But was everyone too quick to dismiss their B1G West title chances? 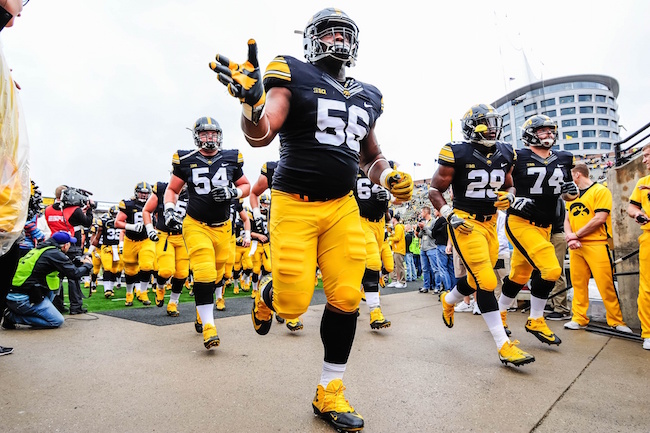 The playoff system created this belief that if you are a Power Five team and you aren’t competing for a top-four spot, your season is a failure. But there’s something to be said for winning your own division and getting to play in a conference title game. For a program desperate to show it can sustain success for more than one year at a time like Iowa, that matters.

Being ranked and proving itself to the world is no longer a priority for Iowa. All that matters is the 3-1 B1G record.

RELATED: Iowa not expecting to have key pass-catcher against Wisconsin

While Nebraska and Wisconsin have proven to be the class of the West in the first half, the division race is different than it was last year. The Hawkeyes opened B1G play with a win at Wisconsin, which essentially gave them a 1.5-game lead out of the gate.

This year, Wisconsin already has two B1G losses and Nebraska could easily drop games against the Badgers and Buckeyes. If the West winner doesn’t have two losses, it would be a surprise.

If the Hawkeyes somehow beat Wisconsin this weekend, the narrative will be “Iowa’s not dead yet.” Of course they wouldn’t be. They would be 4-1 in the B1G with basically a 2.5-game lead on Wisconsin and only Nebraska ahead in the division. One game and the Hawkeyes could be very much alive.

That, of course, will be easier said than done. Wisconsin has seen three teams better than Iowa. The Hawkeyes haven’t faced a team with a single top-25 vote except for North Dakota State. Given how dominant the Badger defense has been and how depleted the Hawkeyes appear to be, the odds don’t favor Iowa.

Teams with less talent than Iowa rattled off second-half turnarounds. It would take a turnaround for Iowa to somehow get back to the B1G Championship.

This team has been far too inconsistent on both sides of the ball. The Hawkeyes haven’t held back-to-back opponents under 20 points. On the flip side, Iowa hasn’t scored 20 points in back-to-back games since the first two weeks of the season. C.J. Beathard hasn’t had consecutive games with 200 yards. Iowa allowed an average of 433 yards and 36.5 points to the likes of Northwestern and Purdue.

None of those statistics can continue if Iowa wants to hang around in the B1G West race. A statistic Iowa wouldn’t mind continuing? According to Pro Football Focus, the Hawkeyes have the No. 1 offensive line in America through seven weeks.

That offensive line, after some major shuffling because of injuries in the first half, would obviously get even better if it could get healthier in the second half. If Iowa’s young receivers can start getting some separation, if Beathard can regain his mobility, if the defensive line can starting get off blocks…the ifs are endless.

RELATED: The five things I learned from watching Wisconsin in person

That’s why nobody is predicting this team to make it to Indy. There are too many uncertainties for a team that hasn’t performed all that well against some lackluster competition.

But that was the first half. Iowa, at 3-1, enters the second half still in position to make some noise and put up a better fight to retain its West title than people thought a few weeks ago. One win this weekend can drastically change the narrative for Iowa.

The Hawkeyes would theoretically need two wins against the three top-10 teams that remain on the schedule. That’ll be no small task considering Iowa hasn’t beat a top-10 team in six years.

Saturday would be a good time to start.