Where team was when he was hired — Maryland was in need of a face lift. The Terps lacked an identity after joining the B1G. Randy Edsall wasn’t the only reason for that, but he took the fall. Outside of College Park, the Terps were the team with the bold uniforms that played second fiddle to the basketball team.

Durkin inherited a three-win team that struggled throughout B1G play. If not for a late rally combined with an epic Rutgers collapse, the Terps would’ve been winless in the B1G. Mid-season coaching change aside, Maryland had plenty of issues in 2015.

The biggest one was at quarterback. When Durkin got to College Park, the silver lining to Maryland’s historically awful passing game was that help was on the way. Under Armour All-American quarterback Dwayne Haskins was committed to Maryland, and some expected him to start as a true freshman. But after Mike Locksley wasn’t kept on board, Haskins flipped his commitment to Ohio State.

Maryland’s 2016 class slipped a bit with the coaching staff changes, but Durkin still kept some of the key recruits in place, including a pair of four-star offensive linemen.

So there is incoming talent and key pieces returning. But Maryland’s biggest question mark from 2015 — quarterback — is still a question mark and the Terps have three NFL defenders to replace. 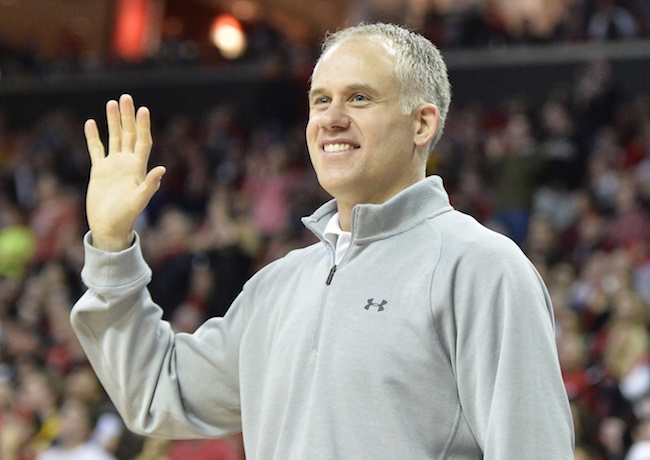 Durkin had himself quite an April. Five players with ratings of four stars or better — all from the DMV — announced their verbal commitments to Maryland. Currently, the Terps have the 13th-ranked class in the country. That’s an impressive accomplishment this early in Durkin’s tenure.

Landing a talent like Joshua Kaindoh — the No. 2 defensive end in the country — could be the game-changer Durkin needed. He turned down all the powerhouse programs that invaded the DMV in recent years and stayed close to home (he goes to IMG Academy in Florida). He and former IMG teammate Cam Spence already talked about wanting to recruit the DMV’s best. That’s exactly what Durkin needs.

The two biggest recruits they’re after are Dematha Catholic products Chase Young and Anthony McFarland. How serious are they? Go to the 1:30 mark in this video:

If you’re a Maryland fan, the 2017 class is playing out the way you could’ve hoped for. A bunch of local standouts — including a four-star quarterback — are already committed to the Terps before summer. Durkin knew that his ability to build Maryland into a contender started with whether or not he could recruit the DMV. So far, so good.

What could get him fired — An 0-12 season with arrests, de-commitments and bad press galore. And maybe not even that.

Why he’s at No. 11 — Durkin got a higher spot than any of the first-year coaches in the B1G for one big reason, in case you couldn’t already tell. He’s already taken major steps to rope off one of the top recruiting hotbeds in the country. Chris Ash is beginning to do that in New Jersey, but he’s not where Durkin is yet.

The first-time head coach also hired one of the more experienced staffs among Power Five programs. He brought in three guys who were FBS head coaches in 2015 — Scott Shafer since resigned due to personal issues — to guide him along the way. But he also hired a couple of young, promising coordinators.

Will there be too many cooks in the kitchen? Only time will tell. But for now, Durkin had the best offseason of the first-year B1G coaches in terms of hiring a staff and recruiting. If he can coach his defense up like he did at Michigan, Durkin will be moving higher on this list in no time.