Flip on Maryland or Minnesota this year and you’ll probably notice something.

When Ty Johnson and Shannon Brooks touch the ball, good things happen. Both can turn any run or any catch into six. Neither are the biggest, neither are the most explosive and neither are likely known much outside of B1G country. In fact, the 2015 recruits only had three Power Five offers between them.

Their teams will face off this weekend. Maryland will have to try and contain Brooks, and Minnesota the same with Johnson. Both should be at the top of the scouting report because, as previously explained, one play is all it takes.

The question is whether or not these guys are being treated like that by their own teams. The sophomores might not have been the focal point of their teams’ early-season plans, but they need to be now, especially with both coming off lackluster offensive efforts. 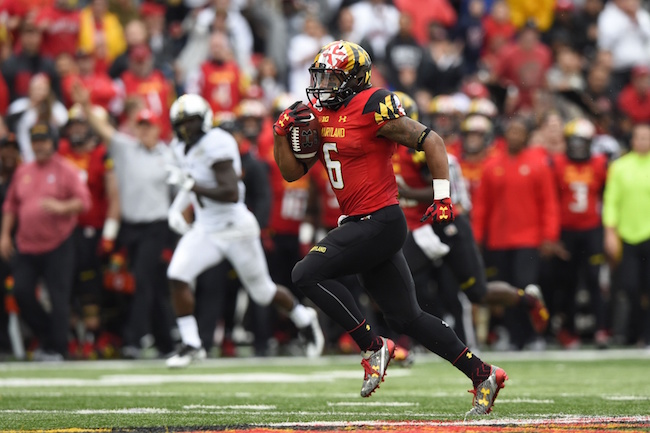 Brooks and Johnson have both been underutilized this year, but somewhat understandingly so. Both play in crowded, talented backfields. Nobody is saying that Maryland should stop feeding Lorenzo Harrison — the freshman is off to a blistering start to his career — or that Minnesota should deviate from Rodney Smith. Harrison and Brooks have proven worthy of getting the work they’ve gotten.

But limiting Brooks and Johnson to the touches they’ve gotten doesn’t make sense. The numbers agree:

A few things stand out when looking at that. Given all the passing problems Minnesota has had this season — only one touchdown pass in four games vs. FBS foes — how has Brooks not been targeted more?

Sure, he only played in three games this year because of his preseason foot injury, but he’s clearly moving well. Brooks finished his freshman season with five straight multi-catch games and was one of the most reliable targets on the team.

Minnesota is coming off a game in which it completed 13 of 33 passes and Brooks wasn’t targeted once. That’s a problem.

Minnesota receivers coach Brian Anderson said this summer that Brooks needed to get at least 20 touches per game. Despite the fact that he wasn’t considered big enough to play in the SEC, Brooks is capable of handling that kind of workload.

Johnson, on the other hand, doesn’t have Brooks’ size. He’s more of an all-purpose back who is proving to be quite the dangerous weapon on the edge. Still, eight touches per game is far too low for a guy averaging 11.4 yards per touch.

In Maryland’s first four games, it was hard to argue with Johnson’s usage. The Terps were 4-0 and off to one of their best offensive starts in school history. Johnson’s seven-carry, 204-yard game against Purdue put the exclamation point on that.

And after Johnson got off to this kind of start against Penn State, the thought was that a similar day could be coming:

That didn’t have anything to do with Perry Hills’ injury, either. Johnson can run the option or run zone reads with Hills or Tyrrell Pigrome.

Maryland wants to get him involved in special teams, but the majority of those touches deservedly belong to Will Likely. Trey Edmunds went down with a broken foot, so that could increase Johnson’s workload. Perhaps Drew Mehringer already has more looks dialed up for Johnson.

Whatever the case, Johnson and Brooks could both be the difference for their teams on Saturday. Leidner was already ruled out with a concussion and Hills could be limited with a shoulder injury. Both Johnson and Brooks need to be featured more in the ground game and in the short passing game. Whether it’s screens, wheel routes or drags, they have to find ways to get the ball in space more.

It’s easy to say that player X isn’t getting enough touches. Shoot, millions of parents mumble that from the bleachers of high school football games every weekend.

But for a couple of teams searching for a spark after their worst offensive efforts of the year, the focus should be obvious; get the ball to these guys by any means necessary.