DJ Durkin knew and embraced the challenge ahead.

Maryland was and is the new kid in school. Michigan is the bully.

That wasn’t news to Durkin. He experienced that first-hand in his one year in Ann Arbor. His defense dominated B1G foes like Maryland and exposed what many knew to be true; there’s a massive gap between those programs.

Durkin’s job at Maryland is simple. Narrow the gap.

From the look of it, Durkin is on that path. His team had a chance to clinch bowl eligibility before November. That would’ve doubled the Terps’ win total in one season. With a regular-season finale against Rutgers, the odds are in their favor to accomplish that feat.

But Durkin won’t be judged on how his team stacks up to the likes of Rutgers and Purdue. His program will be evaluated based on how it looks against top-25 teams.

“As a competitor, you look at things as a great challenge. That’s why you want to go play against the best and see how you measure up,” Durkin said Tuesday. “That’s the approach we’ve got to take. [We] certainly understand what they’re capable of.

“That’s what makes it fun. That’s why you want to play in these types of games and be a part of this conference.” 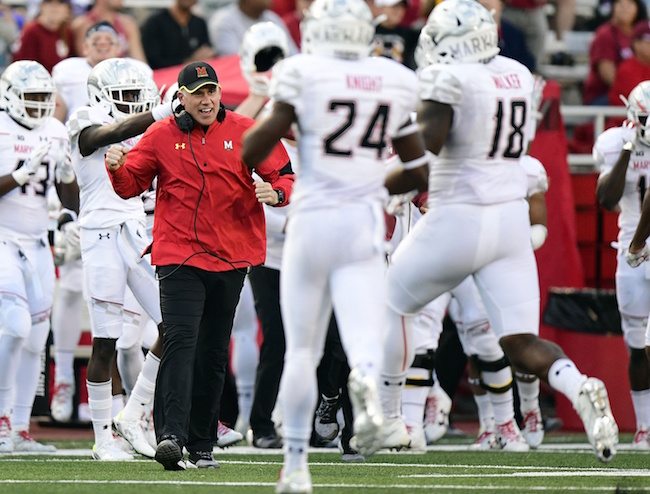 Nobody in their right mind is picking the Terps to overcome a 31-point spread and knock off unbeaten Michigan at home. If Durkin somehow did that, get him his B1G Coach of the Year award and an extension.

Maryland, in all likelihood, will struggle against Durkin’s successor. Don Brown’s top-rated defense is even better than Durkin’s was. The Wolverines lead the country in basically every meaningful defensive metric.

This is good, right? pic.twitter.com/zznlenme0a

If the Terps somehow put up 20 points against Michigan, it’ll be a victory in itself.

The big question is whether or not Durkin’s team can stay on the field with the Wolverines. Against the No. 3 team in the country, can Maryland at least string a few drives together? Can the defense force a couple turnovers?

The longer the Terps keep it close, the more confidence Durkin’s squad is going to get. Even against Michigan State and Penn State, the spread was basically a field goal. The Lions have proven to be better than what that initial line was, but the Wolverines are the real litmus test.

That’s the case this year, and that’ll be the case as long as Durkin is in College Park.

Is that fair? Maybe or maybe not, but that’s life in the B1G East. Ask James Franklin what that’s like. He started 0-7 against Michigan, Michigan State and Ohio State. Look at the perception change of his program since that OSU win a couple weeks ago.

In a three-week stretch, the Penn State went from a team that looked like it belonged in the B1G East basement to a team all of the sudden knocking on the door of the top 10.

If Maryland can annually handle teams like Rutgers, Purdue and maybe Michigan State, Durkin will have the program in a position to follow that meteoric rise to relevancy. That’s much easier said than done. And upsets like the one Penn State pulled off are celebrated like that for a reason.

Getting to the top of the B1G East isn’t easy. Staying there is even tougher. Michigan State is living proof of that.

Durkin’s mission is to annually compete at that level. Nobody is saying he has to win a division title in his first two or three years. But an upset here and there would mean everything for a program still trying to establish an identity in a new conference.

On Saturday, Durkin’s team will play its first true primetime game. Yes, it’s technically a 3:30 p.m. kick, but it’ll be different than a 7:30 p.m. start on Big Ten Network. Maryland will play against a consensus playoff contender in the middle of the afternoon on a national network.

Nobody believes in Maryland to pull off an upset, even with Durkin’s familiarity of Michigan. Not many outside of College Park believe Durkin can compete annually with the B1G East big boys.

Saturday is the first chance for the new kid to show that he won’t get pushed around by the bully.

Hopefully for his sake, he puts up a better fight than Rutgers.