How has Perry Hills stopped his turnover ways? Pro Football Focus weighs in

In case you haven’t noticed, Maryland quarterback Perry Hills’ turnovers are down. Way down.

The guy who threw an interception once every 14 passes in 2015 only has one in 73 attempts in 2016. Hills has a better ratio than the likes of J.T. Barrett and Baker Mayfield. As a result, the team that led the FBS with 36 turnovers in 2015 already exceeded last season’s win total. Five weeks into the season, Maryland is actually first among Power Five teams in fewest turnovers lost.

So what’s been the key? Is it Walt Bell’s offense? Is Hills getting lucky? Is he simply more accurate?

SATURDAY TRADITION: Perry Hills was a turnover machine in 2016. Through his first four games, he’s been anything but that. What’s the biggest difference you see with him on film?

PRO FOOTBALL FOCUS: In part, it’s the offense and what it’s trying to do. They’re running the ball so well that it’s taken a lot of pressure off him. When you look at some of the interceptions he had last year, it was forcing the ball downfield. It was beyond the interceptions. It was fumbles, dropped snaps, and whether they were turnovers or not, they were just plays.

It feels like he’s just a little more comfortable trusting that there’s a running game. The fact that they could go through the Purdue game with 13 attempts, that tells the story right there.

ST: Walt Bell obviously deserves a lot of credit for this turnaround. Why has his system been a better fit for Hills?

PFF: What happens with the spread offense is that it simplifies the reads for the quarterbacks. A program like Baylor has quarterbacks that really don’t turn the ball over because they don’t have to make a ton of coverage reads. They make quick decisions but they’re easier decisions.

That’s essentially what it looks like here. It makes it harder to throw the ball into coverage if you’re just always put in position to find a one-on-one matchup. That’s part of it. You don’t have those situations where Hills is misreading a coverage throwing to a linebacker. 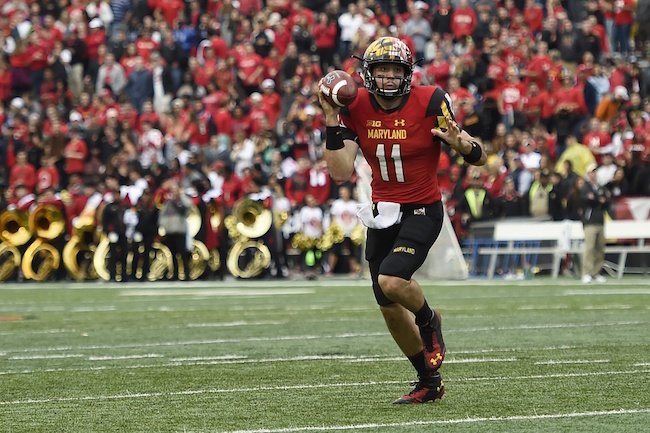 ST: A lot of people assume that a more accurate quarterback is the result of a more conservative game plan but Hills’ yards per attempt are up (5.56 to 7.53). Do they look more conservative or are they just flat out smarter with the football?

PFF: It’s a little more conservative. Hills actually has the 23rd-lowest depth of target in the NCAA right now. In other words, they’re throwing a lot shorter passes. His depth of target last year was 9.8 yards, which is pretty high. This year, he’s at 8.1. That’s a significant move to the shorter passing game.

Statistically, the yards per attempt are up because yards after catch are up. Only 37 percent of his yards have come through the air. That’s the fourth-fewest in the entire nation. So that means he has the fourth-most yards after catch in the nation. It’s the short passes that are making his stats look better. When you do that, you protect the football better.

ST: The competition hasn’t been great yet. Compared to most quarterbacks you study, what kind of pressure is Hills seeing on a regular basis?

PFF: Hills is actually in the top half of the league in terms of getting pressured. He’s at 35.5 percent (pressures per drop back), which is a little bit above the NCAA’s average. Last year, he was at 43 percent, which made him the fifth-most pressured quarterback in the country.

ST: Last year, Hills’ best games were all from big rushing days. He’s only rushed for 30 yards once in 2016. Are you seeing less designed runs for him because of this increased accuracy?

PFF: I’d say that’s more because they don’t have to. Getting production from the running backs is going a long way. Just having him as a threat is a big factor. It’s still a competition-level thing, too. You saw this with Deshaun Watson quite a bit the first few games. He wasn’t used in the designed-run game at all but then you get to the ACC schedule and you have the big game against Louisville and you break it out.

I’m curious to see how that works. Not that Maryland is ever taking anyone lightly, but I wonder if against a Penn State and other B1G teams if they would look to move back to the designed quarterback runs a bit.

PFF: He has been good this year. The numbers have been backed up by the on-field play. He has three turnover-worthy plays this year and that’s only 3.23 percent of his drop backs. That’s above average.

Last year, the interception numbers were legit. He deserved them. He had turnover-worthy plays on 8.19 percent of his drop backs (national average was 4.58). That’s a huge, drastic difference.

ST: There are some Maryland fans that want to see freshman Tyrrell Pigrome at least get some snaps, especially after his walk-off TD at UCF. Would Maryland be foolish to mess with a two-quarterback system if Hills keeps playing like this?

PFF: You kind of want to keep the rhythm they have right now. But I’d be quick to move to that if you see old Hills come back.

ST: Based on what you’ve seen of Hills in Walt Bell’s system, is there reason to believe that this kind of turnover-free start can continue against the B1G powers that await?

PFF: I’m usually on the wait-and-see side, especially four or five weeks into the season. Even in the NFL level with Dak Prescott, I don’t think he is what he’s showing yet. I still have my doubts.

I feel the same way with Hills. At some point, the running game gets shut down. At some point, when they have to play a pass-first type of game, I’d have my doubts. You just have to manage the game extremely well. Don’t let the game get away from you and you can kind of keep him contained. If it gets out of hand, I definitely have my doubts.