If you like watching William Likely play football, 2016 is the year for you

CHICAGO — Inevitably, it’s going to happen at least once in 2016.

William Likely is going to break up a pass on third down. He’ll then drop back about 40-50 yards and field a punt, which is what he does best. After Likely is brought down — assuming he doesn’t take it to the house — he’ll stay on the field. Maryland offensive coordinator Walt Bell will line him up in the slot on first down. Maybe Bell sets up a bubble screen. Perhaps it’s an end-around. A quick slant is never out of the question.

However it happens, the sequence will be complete. Likely will touch the ball on three straight plays with three different units. It might not make the highlight reel, and it could even slip by the casual fan.

But it’ll serve as an all-important reminder: Few in college football are as valuable to their team as William Likely is to Maryland.

“He can do everything. Ask him to do it and he’ll do it,” said Maryland offensive lineman Michael Dunn. “He’s obviously one of the best cornerbacks in the B1G. He’s one of, if not the best return men in all of college football.

“Who knows? He’s probably a great quarterback, too.”

For now, the 5-7, 175-pound senior will look to take care of his cornerback/punt return/kick return/receiver duties before adding anything else to his ever-expanding plate.

There was some uncertainty about what kind of role Likely would have with Maryland’s new coaching staff. He was the only player in the country to start on both sides of the ball in the same game last year. That was a credit to his versatility, but it was also the byproduct of Maryland’s depleted skill players.

At B1G Media Days, DJ Durkin made it perfectly clear. Likely is going to play on offense, and he’ll be more than a decoy.

“He’s a dynamic guy. I know from coaching the other sideline against Will, one of my biggest concerns or worries was when he had the ball in his hands,” Durkin said. “So we definitely want to take advantage of that and use him to the best of our team’s ability as much as we can.” 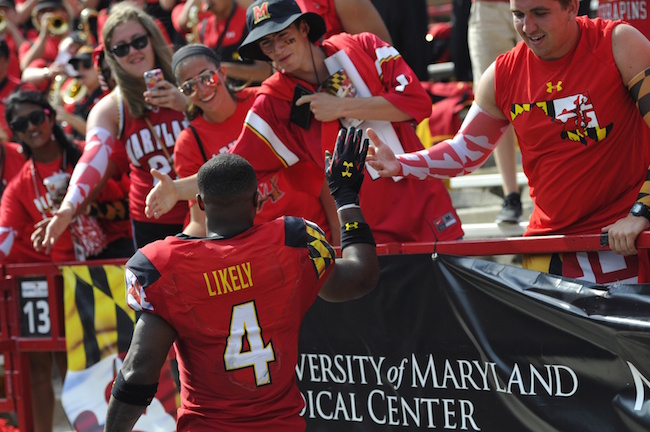 There was a possibility that Durkin’s jack-of-all-trades weapon wouldn’t be back for his senior year. With a new coaching staff coming in, Likely could’ve easily elected to leave early for the NFL like defensive running mates Yannick Ngakoue and Quinton Jefferson did. His small frame might’ve prevented him from being the prospect fellow Terps defensive back Sean Davis was, but Likely’s special teams prowess could earn him immediate playing time at the next level.

It wasn’t an easy decision. After talking to the coaching staff, Likely decided to do it all one more time.

“I was shocked. I was very, very shocked,” Maryland linebacker Jermaine Carter told the Baltimore Sun. “But I was happy at the same time just to know that we had another guy with some experience coming back.”

With that decision came new responsibilities. In addition to being the leader of a young, new-look team, Likely had some homework to do.

Bell runs an up-tempo, spread-you-out, get-the-ball-out-of-the-quarterback’s-hands offense. In his two seasons as the offensive coordinator at Arkansas State, he ran an average of 79 plays per game. Bubble screens and jet sweeps are fixtures, which bodes well for Likely.

He’s deep into the process of mastering the offensive playbook, and not just the sets that he could be featured in.

Not surprisingly, expectations are high for the reigning first-team All-American punt returner (FWAA) and first-team All-B1G defensive back (B1G coaches).

Likely will begin the season on four different national award watch lists. The Bednarik, Nagurski and Thorpe awards nominated Likely for his abilities as a cornerback. The Paul Hornung Award, given annually to the nation’s most versatile player, might be Likely’s calling. No B1G player has won the award in its brief six-year history.

But Likely is used to breaking barriers. Last year, he started the season by breaking Nile Kinnick’s 76-year-old B1G record for punt return yards in a game. Likely owns Maryland records in the following categories:

There seems to be a consensus thought among Maryland players.

“I’m just happy he’s on my team and I’m not the one chasing him around,” Carter said.

There’s a chance that shifty players like Likely could be limited down the road. The American Football Coaches Association’s board of trustees and the NCAA Division I Football Oversight Committee began discussions about possibly eliminating kickoffs in college football.

That already received resistance from people like Durkin, who are worried about the reasoning behind the potential change. Even though no change would happen in FBS until after the 2017 season, Likely didn’t mince words when asked what that would do for players like him.

“It would take the fun out of the game,” Likely said. “It’s not really football anymore. You might as well just play seven-on-seven or something.”

RELATED: DJ Durkin: No reason Maryland can’t be on top of B1G

Fortunately for Likely and the Terps, they won’t have to worry about any limitations put on their best player in 2016.

How many touches will he get in a game? Five? Ten? Fifteen? That remains to be seen.

He’s well-aware of the fact that he’s the only returning member of the secondary. Likely also knows that the Terps lack proven receivers and that he’ll be called upon in a variety of offensive looks. Not lost on him is the reality that teams will kick and punt away from him as much as possible, which will magnify his touches even more.

Likely has been questioned repeatedly about what the coaching staff has planned for him in 2016. He always seems to end on three words.