When it was reported that Perry Hills would not start on Saturday, Maryland fans might’ve been optimistic.

Tyrrell Pigrome, the electric freshman, had plenty of supporters entering Saturday. The guy who delivered the walk-off touchdown at UCF showed flashes of brilliance in a limited sample size. Saturday was his chance to show brilliance with a larger sample size.

Well, it didn’t work out that way.

Instead of Pigrome running all over the place and making Maryland fans giddy about the future, he made them worry about the present. Minnesota’s defense adjusted well and gave the freshman an unwelcome introduction to B1G play.

How rough was it for the Terps early on? Maryland got into Minnesota territory twice in the first three quarters. Dating back to halftime of the Penn State game — when Pigrome came in for the injured Hills — the Terps went five quarters without points.

Coming into the season, a stat like that wouldn’t have been much of a surprise for Maryland. But given how well the Terps offense performed in the first four games with Hills under center, it was a monumental difference. 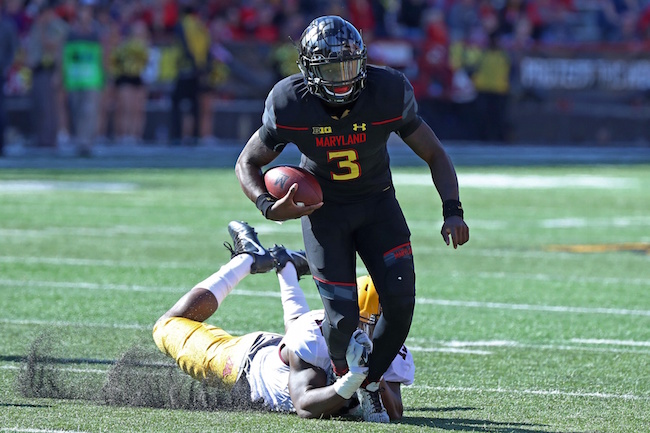 Hills led Maryland to the B1G’s third-best offense through six weeks. Yes, the guy who threw an interception once every 14 passes last year was responsible for one of the conference’s best offenses.

Hills didn’t exactly do it by delivering 60-yard touchdown passes, but he was moving the offense with high-percentage passes and the help of the Terps running game. That was non-existent on Saturday. Credit the Gophers for loading the box and forcing Pigrome to beat them with his arm.

Antoine Winfield and KiAnte Hardin picked off Pigrome and Jonathan Celestin was in his ear all afternoon. Pigrome, while talented, looked like a guy still learning how to read protections and coverages. That’s not easy for a freshman to come in and do.

On the flip side, Minnesota’s backup quarterback, Conor Rhoda, didn’t try and do too much. He wasn’t asked to do as much. With Rodney Smith and Shannon Brooks rolling like that, there wasn’t much Rhoda could do to mess that up. If not for a slew of penalties, Minnesota would’ve won by even more.

It was another setback for a program that was rolling a couple weeks ago. D.J. Durkin and Walt Bell had the Terps with a top-15 offense and defense after five weeks. But that was with Hills under center.

Does Hills deserve credit for all of Maryland’s fast start? No, but everything comes back to the quarterback position. The Terps defense was gassed because of the offense’s inability to stay on the field. As a result, Minnesota doubled up Maryland in the ground game and held a strong time of possession advantage.

It’s not Piggy time. At least not yet.