Let me stop you right there. Yes, Michigan State was a better victory than Rutgers. That’s obvious.

But the Rutgers win clinched a bowl berth for Maryland in DJ Durkin’s first year. That game was the reward for a lot of players who could’ve left after Durkin arrived. The Terps weren’t picked by many to get to a bowl game. Doubling a win total in one year isn’t easy.

That game, though it wasn’t the most thrilling or surprising, still provided Maryland with its best moment of the season. Goodness, tell me a bowl game didn’t mean anything to this team: 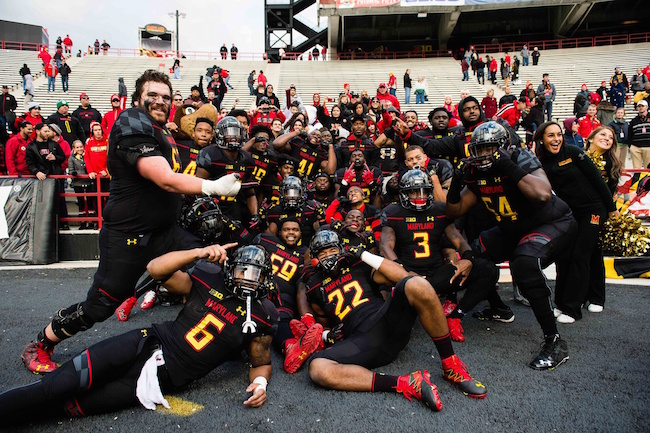 To be fair, nobody expected the Terps to knock off the Buckeyes. But Maryland was a week removed from getting waxed at Michigan, and it was essentially a repeat against OSU.

Losing 62-3 is never fun, no matter what the expectations are. A 59-home loss can create doubt for a young team, especially one with a first-year coach. Losing back-to-back games by a combined score of 121-6 against two contenders showed how far the Terps have to go to be truly competitive in the B1G East.

Maryland was at a bit of a crossroads in double overtime when Perry Hills went down with an injury. The Terps asked a freshman quarterback to go win them the game.

On the very next play, he did.

Pigrome’s walk-off touchdown was huge on a variety of fronts.

It gave the Terps a 3-0 start and some positive buzz heading into B1G play. Without Pigrome’s heroics, Maryland likely doesn’t go bowling. And also important, Pigrome gave Maryland a taste of the future.

He won’t run for walk-off touchdowns every time he touches the ball, but the former Alabama Gatorade Player of the Year gave the Terps a reason to get excited for what lies ahead.

Thank goodness the Quick Lane Bowl happened. Why? The world got to learn what B1G fans learned in 2016 — Ty Johnson is really, really good.

The sophomore tailback ran for 1,004 yards on just 110 carries. His 15-carry game in the Quick Lane Bowl was the most work he received all year. The guy only got double-digit carries three times all year and he still made the 1,000-yard club.

Yes, that’s it. He is the list. And while Lorenzo Harrison is also worthy of sharing some of those duties, Walt Bell knows that he needs to find a way to get Johnson the ball more in 2017.

Maryland gets credit for surpassing expectations in Durkin’s first year. To make a bowl game in what was believed to be the toughest division in college football wasn’t easy.

Had Maryland battled a bit more against the B1G East’s best, this grade would be much higher. The Terps did beat FBS teams that went a combined record 18-43. On the flip side, all of their losses were to B1G bowl teams.

In other words, Maryland improved plenty in 2016. With another year of Durkin’s defensive principles instilled, Maryland should improve even more in 2017.