For the next two weeks, we’ll be taking a look at where each B1G team needs to improve and answering pressing questions this offseason. For some it’s establishing depth, and for others, it’s learning a new system. Whatever it is, each team has at least five things to take care off before 2016 kicks off.

1. Figure out the quarterback situation

By now, you already know that it was a historically bad season for Maryland quarterbacks. Perry Hills and Caleb Rowe were an interception waiting to happen.

It’s easy to forget that the Terps actually held their own against Iowa, Michigan State and Ohio State. But that was either because of the running game, the defense — that had three NFL draft picks — or special teams. Maryland would’ve been a much better team wit a game-manager at quarterback.

That could be what the Terps are looking for at the position. Whoever starts at quarterback, decision-making obviously has to be priority No. 1 this offseason.

Last year, it felt like Maryland had a new quarterback every week. D.J. Durkin would be wise to solidify that position a little further in advance than Randy Edsall did. This is still a young group of receivers that wasn’t always in sync with the revolving door at quarterback in 2015. Competition is healthy, but stability at the position could go a long way in Durkin’s first year in College Park.

Much of that decision-making process could depend on Bell, who enters his first year as a Power Five coordinator. Bell wants to run a fast-paced offense (who doesn’t these days?) and spread defenses out. That would put less pressure on the Terps’ turnover-prone quarterbacks to go through their progressions.

Like we saw in the spring game, that could open the door for Maryland to catch defenses napping and hit on the occasional big play. It’s still a work in progress, because Bell’s system is significantly different than Mike Locksley’s.

This unit has talented receivers in D.J. Moore and Levern Jacobs, not to mention skilled tailbacks Wes Brown and Ty Johnson. Buying into Bell this summer could yield a needed spike in production.

Losing two talented pass-rushers early to the NFL is a tough pill to swallow. Losing a new defensive coordinator in the middle of spring isn’t fun, either. Unfortunately, that’s the reality for Maryland.

RELATED: Maryland DB Sean Davis goes to Steelers at No. 58

Luckily, the Terps got the experienced Mike London to take over the defensive line. He and new DC Andy Buh will have to figure out the best way to generate pressure in the 3-4. Roman Braglio showed plenty of promise rushing off the edge in the spring game, as did Chandler Burkett. Nobody will be expecting them to put up the numbers that Ngakoue did. Frankly, they shouldn’t have to.

But everybody’s job on defense is easier when the defensive line can rush the quarterback. That could be the remedy for some of Maryland’s inexperience at the second level. 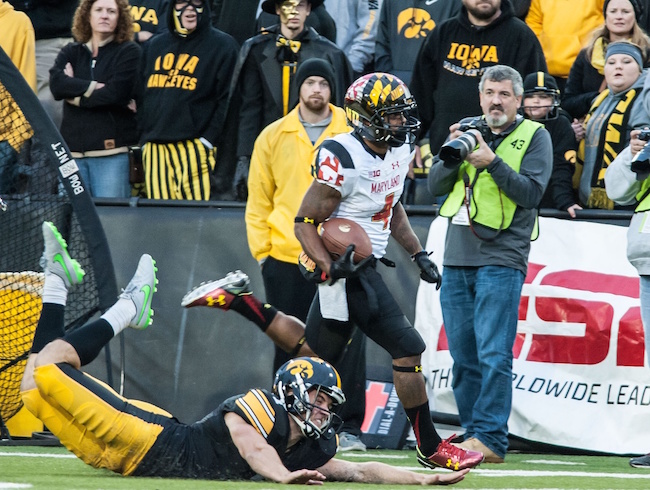 4. Find the best way to utilize Will Likely

Likely isn’t one of those inexperienced defensive backs. In fact, it feels like he’s entering his seventh season for the Terps. Maybe that’s because Likely rarely left the field in 2015. As much as it excited fans to see Likely getting offensive touches, it wasn’t an ideal situation.

It would be surprising to see Likely back on offense regularly, barring a slew of injuries to the Terps wideouts. He’ll likely go back to being just a shutdown corner and arguably the nation’s top returner. That’s where he’s at his best.

Could we see Likely catch a few bubble screens in 2016? For sure. Just don’t expect him to start at wideout again. If that happens, Maryland is in serious trouble at receiver.

5. Set up a wall around the DMV

I apologize if you’re sick of reading that line, but it’s so critical do Durkin’s short and long-term success at Maryland. This summer is going to be a big one for recruiting and building the Maryland brand. It’s more than a satellite camp or flashy preseason hype videos.

Durkin has a prime opportunity to land some of the nation’s top talent without having to go very far to do so. Getting a commitment from a recruit like Joshua Kaindoh is huge, as was the one from IMG Academy teammate Cam Spence.

But Durkin still has to recruit those guys, who will undoubtedly get more and more interest as signing day nears, and the other top DMV recruits. Chase Young, Anthony McFarland and Deon Jones are all big-time DMV recruits who could all wind up at Maryland.

If Durkin can land commitments from one or more of those guys this summer, the Terps could be looking at a top-10 class by the time the 2016 season kicks off. That would be quite the accomplishment for Durkin before he ever coaches a game.